With a gorgeous gown, this rap star launched an important conversation about masculinity.

“When it comes to swag, there’s no gender involved." 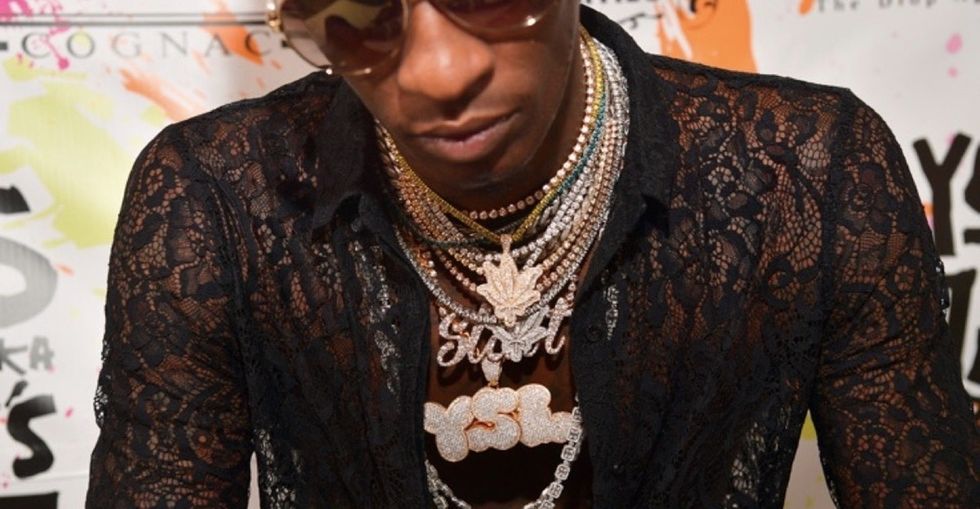 Young Thug does not give a shit about your feelings.

I'm sorry if that bothers you. You might share a planet, a community, or even a room with the 25-year-old rapper. But you are not in his orbit. Words thrown at him in anger, disgust, or awe seem to roll off his back like water. He just doesn't care.

“I like everything that people say,” he told The Guardian. “No matter what they say. You gay, you a punk. You got a nice girlfriend, you’re ugly, you can’t rap, you’re the hardest.”

He sets opinions aside and goes about his business. And by the way, his business is booming.

His latest mixtape is a great listen, but most people are stuck on the cover.

It's called "JEFFERY." That's Thug's given name. And he's on the cover, wearing a stunning garment-turned-sculpture, by artist/designer Alessandro Trincone.

""JEFFERY"" available everywhere tonight at 12am est. Shot by: @whoisglp

Part samurai, part Scarlett O'Hara, the piece is tailor-made for someone like Young Thug. Violet ruffles effortlessly fall down his body. His face is obscured by a jaunty parasol hat, a few stray dreads in the frame. Head to toe, it's beautiful.

"When I seen that dress,” he told Billboard magazine, “I felt like God gave it to me.”

Fans and followers fired back with the kind of comments you might expect from the bowels of Twitter. Many questioned his sexuality. Some told him they wouldn't buy his music. Some even questioned the sexuality of everyone who even listened to the album.

Luckily, his supporters were equally, if not more, outspoken.

Erykah Badu even tweeted that Thug's look reminded her of André 3000. And she would know.

This is not Young Thug's first time pushing back on outdated gender norms.

"She told me that she love the way I dress, like a prince but I'm a boy."

He's tall and sleight of frame. Like most rappers, he wears chains, rings, and fabulous jewelry. But that's where a lot of the comparisons end. He rocks wooly Ugg boots and occasionally dons children's dresses as T-shirts. You don't have to "get it" to see that it totally works for him.

As a kid, he says, he started gambling and used his winnings to pay for his own clothes, mostly women's.

His feet were small enough to wear his sisters' glitter shoes. But not everyone celebrated Jeffery's groundbreaking choices.

"My dad would whoop me: ‘You’re not going to school now, you’ll embarrass us!’ But I never gave a f— what people think," he told Billboard.

So now, 90% of his clothes are women's. And, by any standard, he looks amazing.

“When it comes to swag, there’s no gender involved," he told Billboard.

Of course, Jeffery-turned-Young Thug's music leaves some things (OK, many things) to be desired.

One critic described Thug's brand of hip-hop as post-verbal. It's brash. It glorifies guns. It's misogynistic. It's homophobic. And as much as I hate to admit, it's catchy af.

He's the first artist to have three Top Five rap albums on the Billboard charts in one year. He sells out shows. He's doing Calvin Klein ads. Teens chant his name. White teens, even.

So yeah, when the man who yells, "I'mma catch your mama, she gone f*$%  me and my team" hints he may wear a dress at his wedding, it's a bit jarring. It doesn't make sense. But maybe that's the point.

And as a black queer woman, I'll admit that Young Thug is more than a little maddening.

He exists in a really frustrating, hypocritical intersection. He can degrade women and wear dresses. He can rap adamantly about not being gay, throwing the word faggot around like confetti, and still have Elton John sing his praises.

No, Young Thug is not the black, genderqueer, forward-thinking, rockstar-rapper that so many of us want him to be. But he is making us think about gender norms and masculinity, and that's important.

I believe we can continue to push and challenge him on the messages he's putting out into the world while fully believing he'll look beautiful on his wedding day in a gorgeous dress. We all deserve to feel comfortable in our own skin, even people who's lyrics we don't always agree with.

He's an artist. He's a father. He's the 10th of 11 children. He's a student of high fashion. He's here to be himself and enjoy himself, opinions be damned.

His style and creativity will undoubtedly inspire a generation of young men to take chances and reject the notion of monolithic black hypermasculinity. And if he can do all that in a dress, why the hell not?