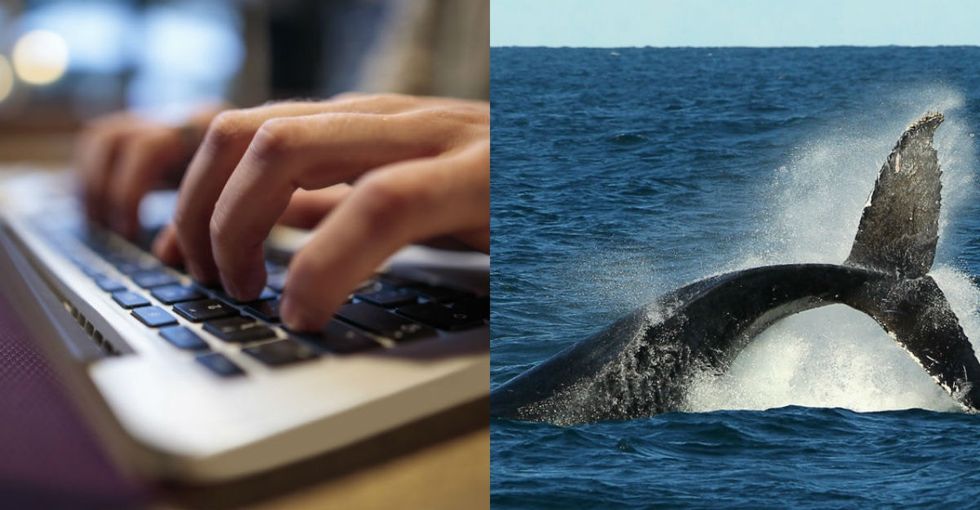 7 of the 13 great whale species are endangered or vulnerable. But nearly one-third of all the data transferred across the Internet is content for, ah, adults ... if you know what I mean.

If you think these figures are completely irrelevant to each other, well, you'd be wrong — at least during the month of February (or for someone who's conducting very niche research).

Because here's the thing: Although the complex, systemic problems facing whale populations across the globe can be overwhelming (I'll get to those in a moment), there's a simple, free, and (dare I say) fun way you can help save the whales this very moment.

“We’re doing this specifically because it’s a brand-new way for us to lend a hand in terms of supporting causes that might not have a large enough platform behind them,” the site's vice president, Corey Price, told BuzzFeed News.

“This initiative allows us to demonstrate our sincerity and integrity when it comes to helping out one of the planet’s most sacred populations of creatures — especially with what’s been going on in the U.K. as of late with sperm whales washing ashore mysteriously — these animals need help.”
— Corey Price, to BuzzFeed News

This thing that happened in the U.K. he speaks of is pretty awful — three whales washed ashore on a beach in Eastern England in January, just days after the same thing happened in other areas of Europe. Yeah, not good.

Someone graffitied "mans fault" on one of those poor whales in England. Photo by Dan Kitwood/Getty Images.

We don't have the best track record when it comes to treating our whale friends fairly.

Commercial whaling, although illegal, is still happening, lethal "scientific" whaling is unnecessary, and climate change (again, caused by us) means whales' habitats have been affected tremendously in recent decades.

We could be doing so much better.

This can be your way of lending a helping hand (er, you get my drift) for sea creatures that desperately need our help.

Hey, and if this isn't your preferred method of philanthropy — to each his own — you can always learn more about how to help on the Moclips Cetological Society's website. (I doubt you'll find as fun of an option to give back, but you can try.)