Why sports teams and players shouldn't be obligated to meet the president. 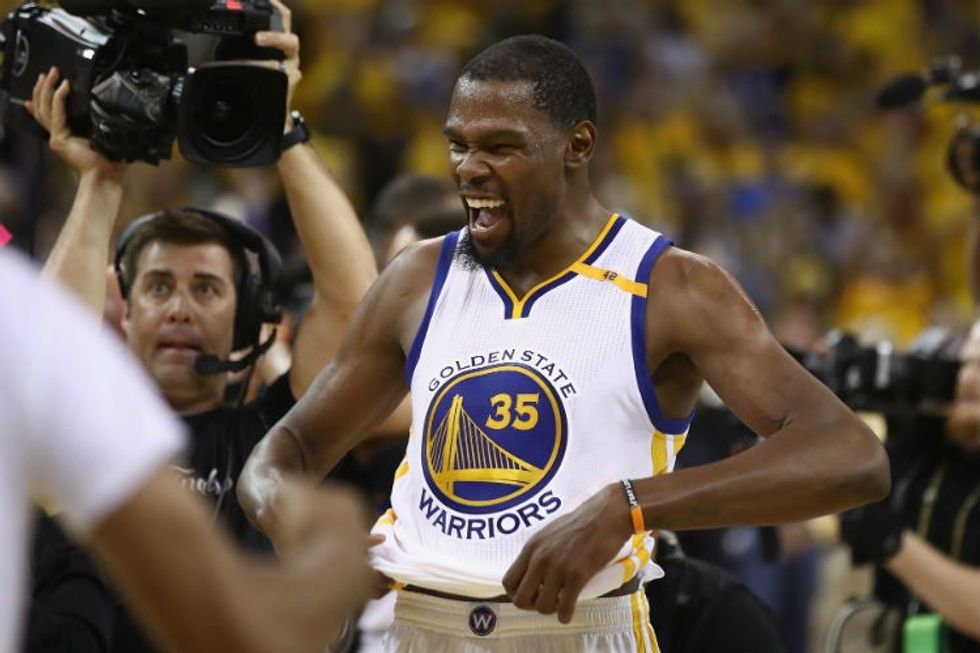 The Golden State Warriors went through all of the celebratory traditions after beating the Cleveland Cavaliers in Game 5 of the NBA Finals to become this year's league champions: They relished in falling confetti, took photos with their beaming families, promptly donned their new "NBA champions" hats, and raised their shiny new trophy into the air as one.

But there's a very big tradition the Warriors may not be partaking in this year: meeting the president.

According to some unconfirmed reports that surfaced in the hours after the game, the Golden State Warriors may not be visiting the White House to meet President Donald Trump.

Pro teams often get White House invites after bringing home the gold in their sport. But, according to an unsubstantiated tweet from CNBC analyst Josh Brown, the Golden State Warriors voted to opt out of the event just hours after beating the Cavaliers.

Brown's tweet quickly took off, with people both praising and critiquing the team's "unanimous" decision.

In response, the team released a statement on the matter, contradicting Brown's Tweet.

"Today is all about celebrating our championship," the statement read. "We have not received an invitation to the White House, but will make those decisions when and if necessary."

If the Warriors do end up deciding against a trip to D.C., though, it won't be all that surprising to many Golden State fans.

Many Warriors players have been critical of Trump over the past several months.

In February, star player Steph Curry was asked if he agreed with Under Armour CEO Kevin Plank's comments referring to Trump as a "real asset."

"I agree with that description — if you remove the 'et' [from 'asset']," Curry shot back.

"As someone whose family member was a victim of terrorism, and having lost my father: If we’re trying to combat terrorism by banishing people from coming to this country, [we’re] really going against the principles of what our country is about, and creating fear. It’s the wrong way to go about it. If anything, we could be breeding anger and terror."

Golden State guard Shaun Livingston said months ago that, should his team win the championship, he "definitely wouldn't go" to the White House. After Trump's inauguration, player David West claimed Trump voters "responded to some of the most infantile, non-decent language that you could expect coming from a [presidential] candidate."

The Warriors' big NBA win comes after many New England Patriots skipped out on their White House visit following their Super Bowl victory. Defensive tackle Alan Branch was one of the players who sat on the sidelines for the event, citing the "disgusting" way Trump talks about women as the main reason he couldn't follow through.

The attitudes of many Warriors and Patriots illustrate why each team and every player should make their own decisions when it comes to a White House visit.

After all, very little about this presidency is normal.

In years past, pro sports teams and their players have put politics aside — regardless of who's in office — and accepted the honor. But an abnormal president calls for bucking normal traditions.