Why one woman decided to open up her home — and her car — to help homeless dogs. 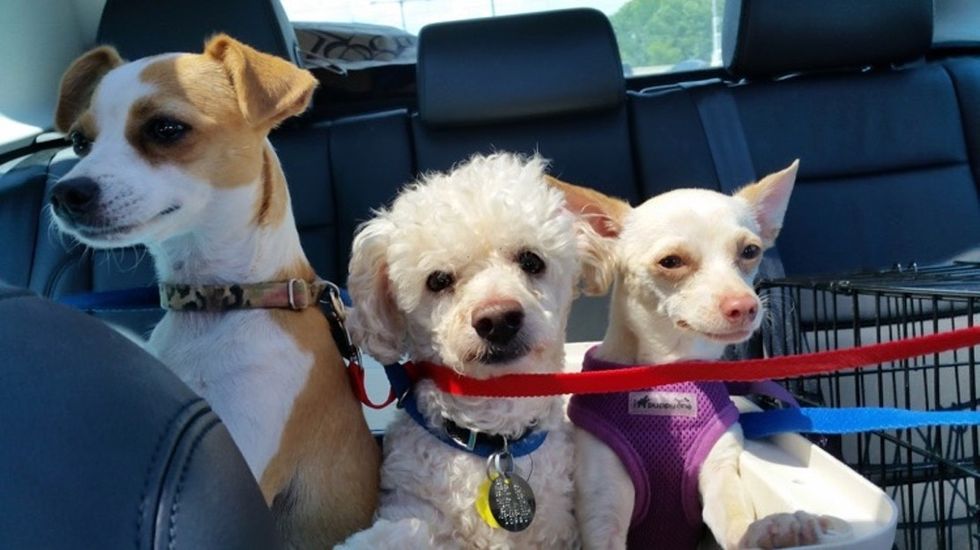 When Hurricane Sandy hit New York City in 2012, thousands of pets were displaced by the storm.

Local shelters and rescues, as well as nonprofits like the ASPCA and Humane Society, sprang into action to assist with search-and-rescue operations and to create temporary emergency shelters for pets found lost in the storm.

Some of these pets were happily reclaimed by their owners after the storm had passed, but others were still homeless, even months later.

When Nina Roadeler learned about the sheer number of dogs affected by the storm, she decided to become a foster for dogs from local dog rescues.

Nina and her dog, Toby. All photos via Nina Roadeler, used with permission.

It didn’t take long before volunteering with dog rescues became a huge part of her life.

In fact, after Nina took a job outside the city and bought a car, she became an adoption coordinator for Friends With Four Paws, a small foster-based rescue run entirely by volunteers in New York and Oklahoma.

All of the dogs rescued by Friends With Four Paws are pulled directly from high-kill shelters in Oklahoma. They spend some time with Oklahoma foster families while they are vaccinated, microchipped, and spayed/neutered. Then they go up for adoption and are driven by a volunteer over two days to New York and placed with new fosters while they await their forever homes.

That’s where Nina comes in.

Not only does she coordinate the transport of dogs from Oklahoma and interview potential adopters before they bring a dog home, but as one of only two volunteers with a car, she spends her weekends driving around New York’s five boroughs — and sometimes beyond — picking up and dropping off food, crates, and toy donations with foster families.

When she's not driving stuff, she's driving dogs to their new homes. In other words, she spends a lot of time as a "dog chauffeur."

Of course, no two dog passengers are alike.

The first one she ever drove, Peggy, was a scruffy 40-pound terrier with tons of energy.

“She was adorable, but she was all over my car,” says Nina, laughing. “She was bouncing around in that car like nobody’s business.”

Peggy, the first dog Nina ever drove in her car.

Some like to sit on a passenger's lap, while others prefer to curl up in a dog bed.

Some like to ride in style and look out the window.

And some can get a little car-sick.

Of course, all this driving also means a lot of time in bad traffic, especially when the drive is into Manhattan or New Jersey.

But for Nina, the minor inconveniences like bad traffic or messy dogs are worth it because giving back is so rewarding.

“When you drop off a dog at an adopter or you are there when the adopter meets the dog, you feel like you are Santa Claus because you bring them a gift — such a huge gift for the many years to come,” says Nina. “I know how I felt when I got my dog. ... He just makes me smile. And knowing that you are a part of really bringing life and love to a family is amazing.”

In fact, she says, she will never forget the experience she had of placing a dog with a woman whose fiance and her previous dog had passed away. “We found her the perfect dog,” Nina says. “And when you do this, [it’s] one of those cry moments.”

Moments like these remind Nina why she is so glad she started volunteering with Friends With Four Paws in the first place.

A group of fosters, volunteers, and adopters at a Friends With Four Paws "Transport Day,"greeting some of the dogs that have just arrived from Oklahoma.

“I do love the people that I am [volunteering] with” she says. “We’re a very small rescue, and so it’s like [being] part of a family that tries to do the right thing and tries to do what they can to really make this world a better place.”