What stopped this man from nearly becoming a school shooter. 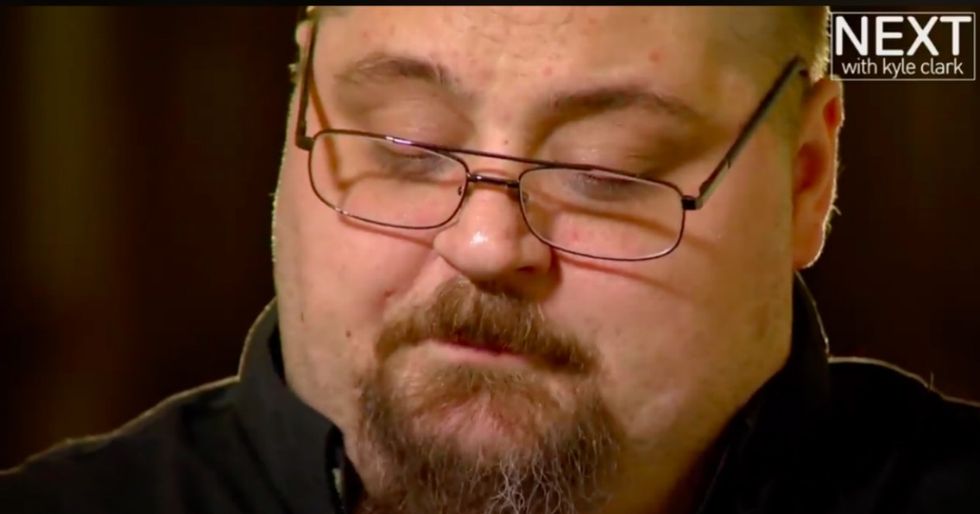 When Aaron Stark was a teenage high-schooler in the mid-1990s, he was depressed and a victim of bullying. He collected weapons and fantasized about becoming a school shooter.

Instead, compassion from others helped him turn his life around.

Stark recently shared his experience in a powerful new essay published by Denver NBC affiliant 9News called "I was almost a school shooter." He also read the piece on camera in an act of personal courage and honesty he hopes could help someone else walk back from the brink.

"I was picked on and bullied. For being fat. For being smart. For not playing sports," Stark writes of his time at Denver's North High School. "So I got angry, and I started hiding weapons around anywhere I hung out at frequently. I had hidden around me knives, sticks, shanks, brass knuckles, whatever. I always kept one in arms reach."

Stark said that while mental health was a real issue for him, he also thinks a "lack of love" seriously affected his worldview and thinks that may have been a factor for "this kid" — meaning Florida school shooter Nikolas Cruz — as well.

One thing kept him from taking the ultimate step.

Before he got the help he desperately needed, he gives credit to one thing that kept him from becoming a school shooter: He didn't have access to an assault rifle. The now-defunct federal assault weapons ban, first passed into law in 1994, meant that it was virtually impossible for someone like Stark to purchase the type of weapon commonly used in mass shootings, including the Parkland school shooting.

Strong laws and compassion saved his life and potentially countless others.

These days, Stark is a husband and father. He says he still occasionally struggles with depression but now has access to the necessary tools and treatments to face it. A combination of commonsense gun laws and access to mental health treatments helped him avoid a tragic turn in his life and eventually get better. He explains:

"I wrote this because my wife and daughter kept saying how they could not understand what could make someone do this. Sadly, I can. This is a hard conversation to have, but we must have it."