What I want you to talk about when you talk about the Orlando shooting.

Last weekend, there was a shooting in a gay night club. I've felt this feeling before. 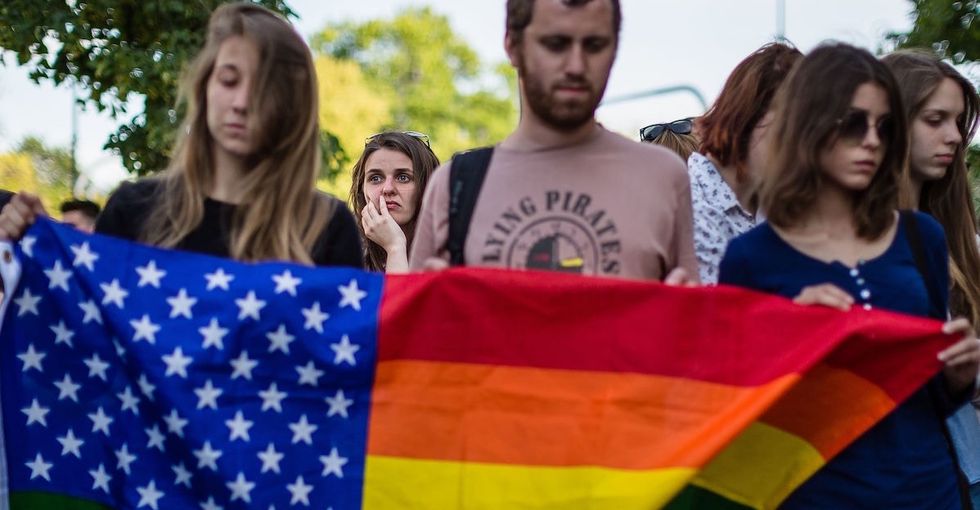 I remember this feeling.

I am 18, and I am at a stoplight. A pickup truck pulls up next to me in the turn lane. I glance; inside the truck are three or four guys, my high school classmates. It’s June. Their windows are down, they are listening to classic rock, and they are wearing undershirts in the heat. I know they’ve seen me, so I timidly wave hello.

Did they wave back or did they laugh and call me a faggot? It doesn’t matter. The light turns green, and I go. The truck swerves out of the turn lane to go straight, and follows me closely. Here’s where I feel it.

My heart beats faster and faster and my knuckles are white on the steering wheel. If I drive home, they will know where I live, and if I drive to a friend’s house and that friend isn’t home, I’ll be alone with them — either way, I risk not even making it to the door. But if I keep driving, they could run me off the road. I have to stop, but I can’t find a safe place.

Finally, shaking, I decide on a gas station. And as I approach the parking lot, I glance in my rearview mirror: The truck turns away and disappears, as if none of this ever happened.

I grew up in Missouri, close to St. Louis, but far enough away that I could play Marco Polo in a wheat field.

When I came out of the closet, I knew of no other gay kids in my high school’s student body of 1,000. I was a senior then, and it was terrifying. Because when I was a freshman, I saw the story of Matthew Shepard’s torture and murder on the TV news. It happened to a kid like me in a town like mine, and I never forgot: It could happen to me too.

When I saw news of the massacre in Orlando, I could see that truck swerving in my rearview mirror again.

I imagine many queer people felt the same way.

The window of a gay bar in Brussels. Photo by Siska Gremmelprez for AFP/Getty Images.

For us, this is different from other all-too-frequent mass shootings, and it is not the same as other terror attacks. This attack was meant to remind queer people, specifically, that despite all of the progress of the last two decades, we can still be made to feel that we exist only at the mercy of others. It was designed to humiliate as much as it was to exterminate — to trick us into believing our breath is a luxury rather than a right.

Queer folks know better than to buy into this. Our diversity can be dizzying — we are intersections of trans, bi, lesbian, gay, gender-non-conforming, black, Latinx, white, Muslim, Christian, Jewish, and so many other identities. But one thread ties all of us together: We know the importance of asserting our humanity. And despite all the risks, we’ll keep doing it.

Our elected officials might be tempted, as any of us might be, to treat this shooting as a gun rights issue alone or as an issue of terrorism or national security.

It is certainly those things: Calls for reforming gun policy, and calls for love instead of terror are valid. But this attack did not occur randomly; it was not aimed at the general public. It was aimed at queer people. And addressing it as though the identities of the victims are of tertiary importance — identities for which real people bled to death — is more than dishonest. It’s a new kind of erasure, a quieter kind of violence.

Flowers at a memorial in Seoul, South Korea. Photo by Chung Sung-Jun for Getty Images.

There are politicians who fight their hardest to steal the dignity of trans people, who fought against my right to marry, and who ignore the epidemic of homelessness among queer youth of color. Watch now as they pirouette gracefully: They will say an attack on gay Americans is an attack on all Americans. They will say this should strengthen our resolve to arm every schoolteacher. They will use it to justify pouring money and lives into the war on ISIS. It is our civic duty to hold them accountable for this hypocrisy.

If I sound angry, it’s because I am.

For my entire life, I have heard from public servants, faith leaders, and even some friends and family members that my existence is an inconvenience — or an abhorrence. Imagine it.

Now imagine real violence done to people who dare exist like me. And imagine it going unspoken or being used for political gain. Imagine what it would feel like to have someone who hates you suddenly force you to take their hand in fellowship.

A year ago this month, the U.S. Supreme Court guaranteed gay people the right to marry all across the country.

I celebrated with my fiancé. I saw rainbows everywhere, online and off. I was buoyed by the outpouring of love, pride, and positivity that followed.

I thought that — just maybe — that shaky 18-year-old, knuckles white on the steering wheel, had finally found the safety he deserved. Imagine being wrong about that.

You’d be angry too.

Another week of 2021 in the books...and now we're fully into September. Holy moly, how did that happen? Pandemic time is so wild.

Another week means another chance for us to counter the doom-and-gloom headlines with some simple rays of sunshine. Need a reason to smile? Here are 10 of them.

1. This story of quick-thinking generosity on 9/11 is a reminder of the goodness of ordinary people.

Mercedes Martinez shared a story on Twitter about how her dad rented the biggest van he could find just before his flight was grounded on 9/11 because he knew people were going to be stranded. He ended up driving seven scared strangers from Omaha to Denver, took them straight to their front doors, and refused to accept any payment. She wants to find the people he helped. Read the full story here and follow her thread here for updates.

Shortly after takeoff, the pilot announced that the flight was being grounded. There was a breach of security and t… https://t.co/Hf6wS5hXbv
— Mercedes Martinez (@Mercedes Martinez)1631242806.0

When he deplaned and heard what was happening, he made his way to either Avis or Hertz (we aren't sure which one he… https://t.co/rNu0xtYshr
— Mercedes Martinez (@Mercedes Martinez)1631242807.0

2. A WWII veteran got to meet the girl who wrote him a letter in the third grade, which he's kept with him for 12 years.

Keep Reading Show less
joy
Get stories worth sharing delivered to your inbox
By signing up you agree to Upworthy's privacy policy.
Trending Stories
design
Design