Watch this sponge-like concrete soak up 4,000 liters of water in one minute.

Now this is some cool concrete. 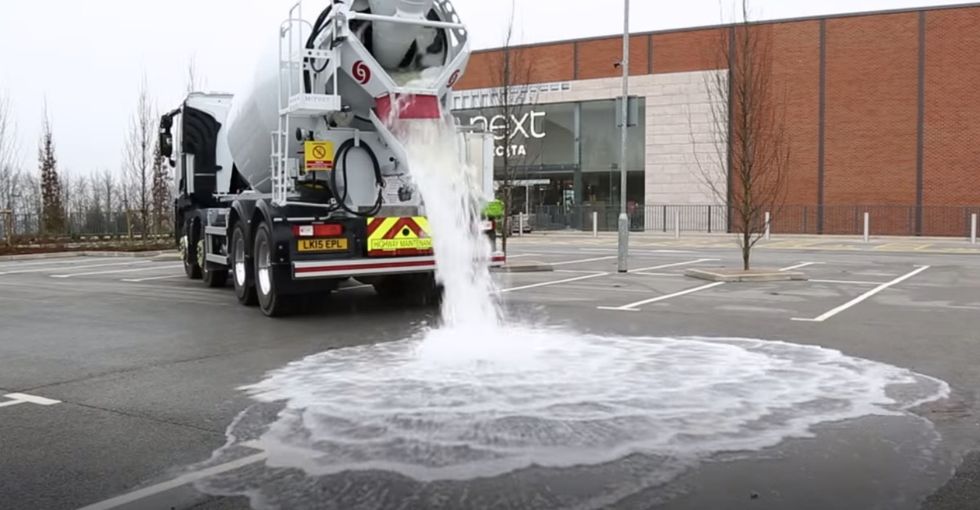 When it rains, it pours. And for people who live in flood-prone regions, that's a problem.

Flooding, unfortunately, is not going away. In fact, in many areas, it's only getting worse.

"While no single storm or flood can be attributed directly to global warming," the National Wildlife Federation notes, "changing climate conditions are at least partly responsible" for increasing bad weather — a reality that's burdening poor regions of the earth more so than developed ones.

And it doesn't help that more people are moving into cities. Global urbanization is transforming once perfectly permeable landscapes into concrete jungles where water can't drain into the earth. This can make for a flooding nightmare.

That's one reason this innovative concrete is so damn cool.

All GIFs via Tarmac.

It can soak up 4,000 liters of water in about one minute.

It's called Topmix Permeable, it's created by U.K.-based company Tarmac, and it's fantastic. Empty space between concrete particles allows water to drain through its surface freely, emptying into permeable layers and the soil below. Unlike standard concrete, Topmix Permeable acts as a reservoir during downpours, storing water below its surface.

The concrete, however, is not without a few caveats. Because it can store water, it can't be installed in cold climates, where that water would routinely freeze and wreck the concrete. And while Topmix Permeable works great for low-trafficked areas with relatively light loads — think parking lots, residential streets, sidewalks, and bike paths — it would not hold up on, say, a busy expressway.

Still, its permeable ways could make a big difference in warm, urban areas that see a lot of rainfall.

This concrete could be a literal lifesaver one day.

Tarmac hopes its concrete will help cities reduce fatalities and injuries due to flash flooding, as excess surface water on streets and sidewalks can be dangerous, Business Insider Australia reported. Less surface water means less slippage, and that could mean fewer tragedies.

In the meantime, though, it's just a whole lot of fun to watch in action.

Watch Topmix Permeable do its work below: