Want to be a good ally? Start accepting people as they are, pronouns included. 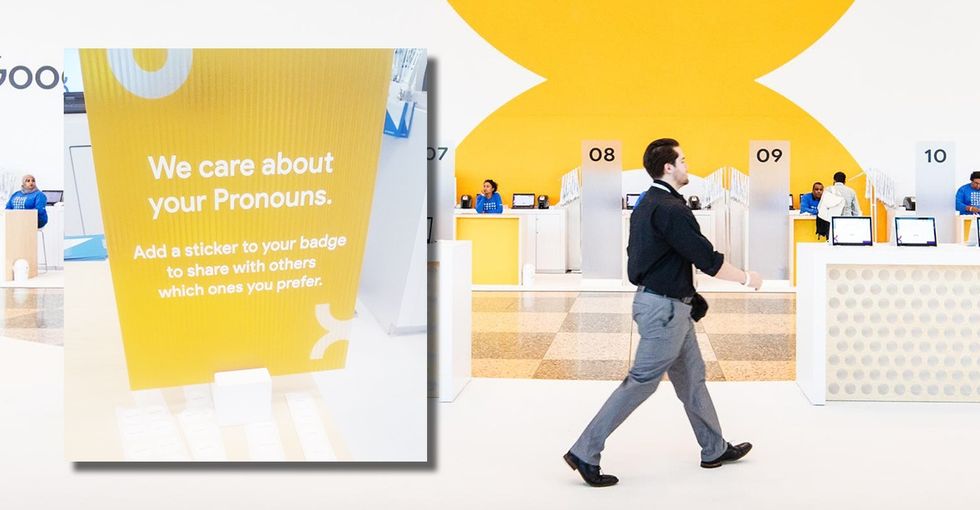 People wear name tags so others know their names. It only makes sense that pronoun tags are a thing as well.

At a Google Next cloud computing conference, journalist Nicole Henderson noticed a sign that said, "We care about your pronouns," offering attendees the option to add a sticker containing one of four options to their attendance badge. Two options, "He/Him" and "She/Her," are pretty standard. The other two options, "They/Them" and "Xe/Hir," are pronoun sets sometimes used by nonbinary individuals, or people who don't fit neatly into the categories of male or female.

And, apparently, this isn't a new thing — not even for Google, which offered attendees at its IO conference earlier this year the same option.

One helpful Twitter user informed me that the American Association of Physics Teachers has been offering pronoun stickers to attendees for several years. A quick search found that conferences like the annual IA Summit, the American Astronomical Society, the meeting of the Museum Computer Network, and many more give the option too. Pretty neat, right?!

Looking at the dismissive and even hostile replies to Henderson's tweet wasn't surprising — but it was disappointing.

This name tag move by conferences is something that has zero negative effect on anybody. It's completely optional and might make a few people who'd ordinarily feel left out actually feel welcomed. That sounds pretty win-win-win to me.

Web engineer and pronouns zine author Fen Slattery shared a great Twitter thread (which you can read in full by clicking here) that offered advice to attendees and organizers of conferences. In short, offering this option can make trans and nonbinary people feel safe, and it can save everyone from a bit of embarrassment.

Why are pronoun buttons/stickers important at conferences? Simple, it helps us trans and nonbinary people to be saf… https://t.co/Gb6caP8wPA
— Fen Slattery (@Fen Slattery)1527600211.0

You may say that you don't understand what it'd be like to have a nonbinary gender and that's totally OK.

There are a lot of things in life that we, as individuals, won't ever truly understand. That's why empathy is so important. Empathy is what tells us to be kind to others even though we don't know exactly how they feel, and empathy is what can drive us to realize that just because we feel something might be frivolous, it may really matter to others.

Now, of course, if you want to try to better understand what it's like to be nonbinary, we've written quite a bit on the subject. There are some simple things you can do to be an ally, such as simply being cool with the whole "pronouns" thing.

Dan Ozzi, a writer and co-author of rocker Laura Jane Grace's memoir about growing up and coming out as trans in the world of punk rock, shared a tip for other writers about pronouns: simply ask people. Seriously, it's that easy.

Being a good ally starts with accepting people for who they are.

At the core, that's all trans and nonbinary people really want: to exist and to be accepted. Small gestures, like advocating for pronoun stickers or being willing to use untraditional labels, can have a big effect on the world.

Thanks to my @Axios colleagues for having pronoun stickers for our staff retreat. https://t.co/nqQSWerUaj
— Ina Fried (@Ina Fried)1531325487.0