Two color-blind brothers see each other in color for the first time, and it's magical.

Reminder: We live in a very vibrant world. 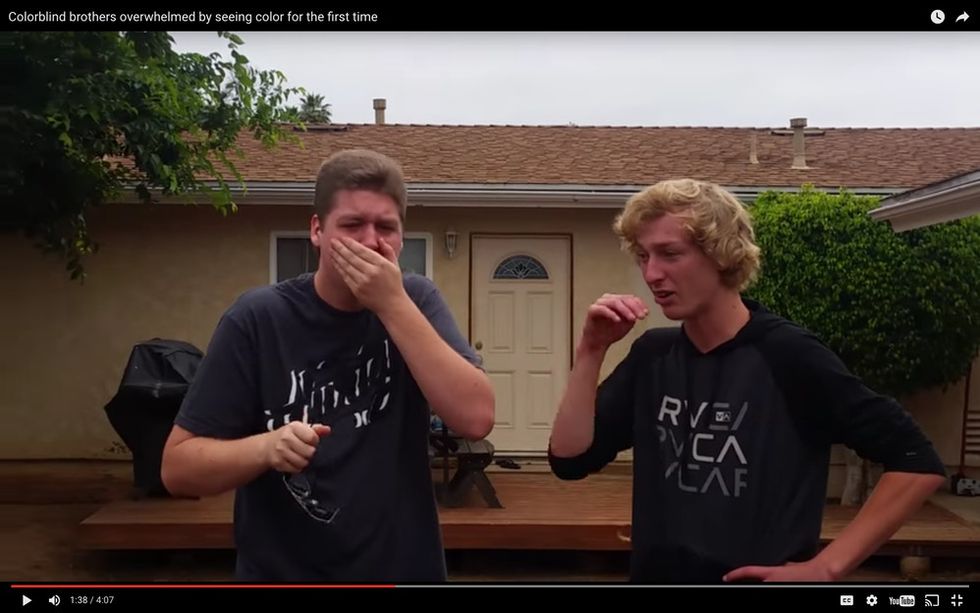 It's easy to take the colorful world around us for granted sometimes.

Sure, sunsets and coral reefs can be pretty spectacular. But what about the vivid colors of party balloons or a pink beach towel?

Aren't those colors special too?

In a touching new video, two brothers, Jimmy and Jace, both of whom are color-blind, try on a pair of glasses that allow them to see colors as they truly are for the first time.

Within seconds of sliding them on, both guys break down, overwhelmed with tears of joy.

Because yes, colorful balloons are amazing.

The video, which you can watch below, was filmed by the brothers' mom while their many loved ones joined them to watch in support. Their mom called the experience a "special [and] amazing moment."

The video is touching hearts across the internet, garnering more than 100,000 views by June 24, 2016 — just three days after being posted.

The glasses Jimmy and Jace tried on were made by a company called EnChroma. And, clearly, they're pretty neat.

The brand's glasses — which are the "only speciality eyewear that alleviates red-green color blindness," according to EnChroma's website — are making a real difference to many of the more than 10 million Americans who are affected by color blindness.

In May 2015, color-blind dad Opie Hughes put on a pair and shed a few tears after truly seeing the color of his kids' eyes for the first time.

He told Upworthy last year that the experience was "like finally seeing a painting finished that you had looked at for 30 years unfinished."

Watch Jimmy and Jace slide on their pair of glasses for the first time below: