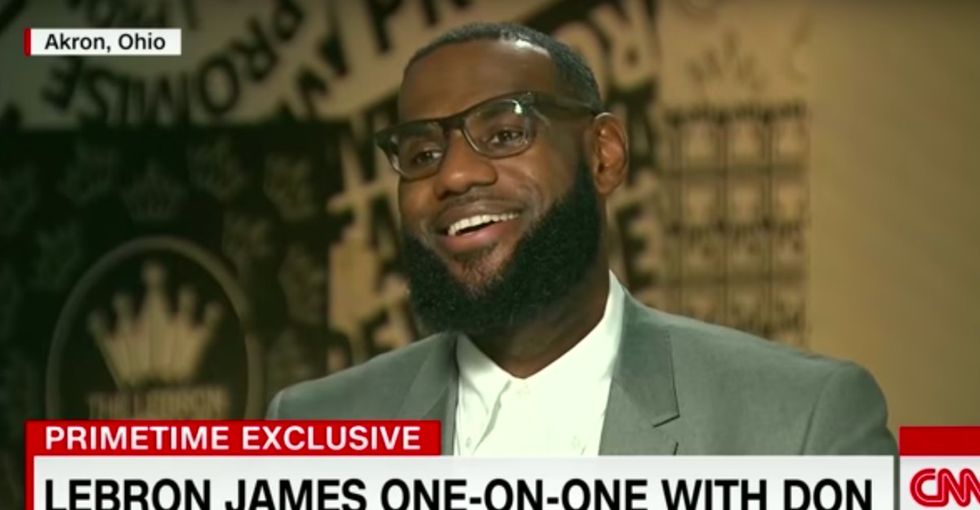 While discussing his newly opened school in Ohio, LeBron James voiced an interesting observation about the president.

Donald Trump intentionally uses sports to exploit our differences, the basketball star said. And that's something he just can't get behind.

"What I've noticed over the past few months," James told CNN, "is [that Trump's] kind of using sports to kind of divide us."

He explained to Don Lemon that he believes Trump is politicizing athletics for personal gain and targeting athletes of color, like Colin Kaepernick and Steph Curry, who use their platforms to speak out.

"That's something that I can't relate to," James said of Trump's divisiveness, "because I know sports was the first time I was ever around someone white."

One way sports have helped James bring people together is through the I Promise School, an ambitious new project benefiting the kids in his hometown of Akron, Ohio.

Teaming up with Akron Public Schools, I Promise serves at-risk kids who were randomly selected from a pool of local students who'd fallen behind their reading level. I Promise implements longer school days to help kids academically, offering a variety of extracurriculars — like art, gym, and music — on top of more standard courses, like math, science, and reading.

Right now, about 240 kids in third and fourth grade are enrolled, James told CNN. But by 2022, the school will be open to first to eighth graders.

That's not all, though.

A collection of James' old shoes line the wall at I Promise. Photo by Jason Miller/Getty Images.

I Promise benefits not just its students, but their families, too.

The school offers a food bank to make sure students — and their parents and siblings — are well-fed. Its job placement and GED programs help parents find work and get an education themselves.

Each student gets a bike, too — a nod to James' own upbringing, when he used a bike to pass through dangerous neighborhoods quickly. "I wanted to keep it as consistent and as authentic to when I was a kid," James said.

To make sure teachers are well-equipped, staff can access psychological training to help kids struggling with stress outside the classroom. And every Wednesday, they can take part in career development services as well.

Not every student at I Promise will be an athlete, of course — but that's hardly the expectation, according to James.

He just hopes every kid will "come away with something" and know the world has a place for them in it.

Be it on the basketball court or in the classroom, James is living proof that sports can be a catalyst that brings communities together — not used as a political talking point intended to divide.

I Promise could teach the president a thing or two, it seems.

Several years ago, you wouldn't have known what QAnon was unless you spent a lot of time reading through comments on Twitter or frequented internet chat rooms. Now, with prominent Q adherents making headlines for storming the U.S. Capitol and elements of the QAnon worldview spilling into mainstream politics, the conspiracy theory/doomsday cult has become a household topic of conversation.

Many of us have watched helplessly as friends and family members fall down the rabbit hole, spewing strange ideas about Democrats and celebrities being pedophiles who torture children while Donald Trump leads a behind-the-scenes roundup of these evil Deep State actors. Perfectly intelligent people can be susceptible to conspiracy theories, no matter how insane, which makes it all the more frustrating.

A person who was a true believer in QAnon mythology (which you can read more about here) recently participated in an "Ask Me Anything" thread on Reddit, and what they shared about their experiences was eye-opening. The writer's Reddit handle is "diceblue," but for simplicity's sake we'll call them "DB."

DB explained that they weren't new to conspiracy theories when QAnon came on the scene. "I had been DEEP into conspiracy for about 8 years," they wrote. "Had very recently been down the ufo paranormal rabbit hole so when Q really took off midterm for trump I 'did my research' and fell right into it."

DB says they were a true believer until a couple of years ago when they had an experience that snapped them out of it: