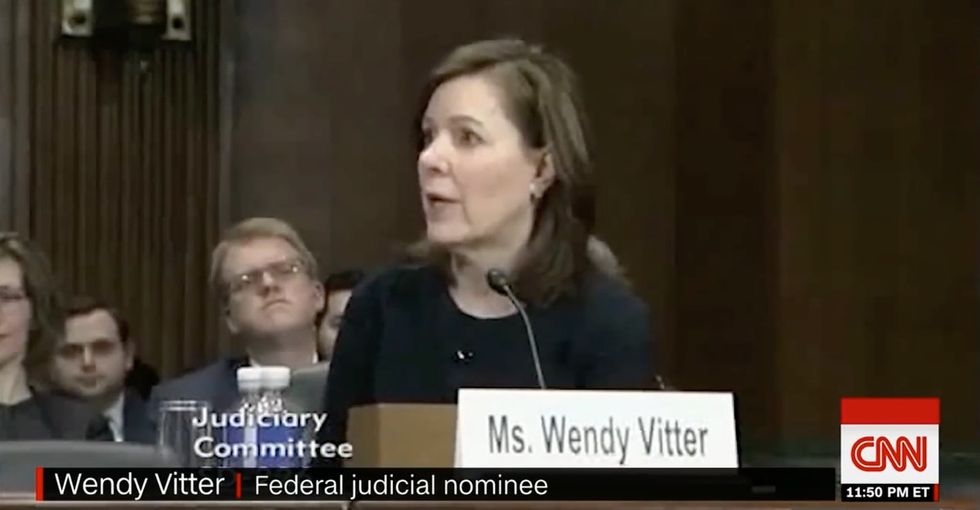 Asked whether she agreed with the Supreme Court's 1954 Brown v. Board of Education decision, federal judicial nominee Wendy Vitter hesitated.

During her confirmation hearing on Wednesday, April 11, Vitter, a nominee for a post in the Eastern District of Louisiana, was asked by Sen. Richard Blumenthal (D-Connecticut) whether or not she agreed with the landmark civil rights case that effectively ended legal segregation in schools.

"I don't mean to be coy, but I think I get into a difficult area when I start commenting on Supreme Court decisions — which are correctly decided and which I may disagree with," Vitter responded. "Again, my personal, political, or religious views I would set aside."

Pressed on the matter, Vitter refused to clarify whether or not she believed this was a decision the court got right or whether she agreed with it, but she did say she'd uphold precedents set by higher courts if confirmed. The answer quickly drew the shock and ire of the Leadership Conference, a civil rights organization founded in 1950.

Vitter's history as an anti-abortion activist played a role in her hearing as well, when she was asked about Roe v. Wade.

At an anti-abortion rally in 2013, Vitter reportedly said, "Planned Parenthood says they promote women’s health. It is the saddest of ironies that they kill over 150,000 females a year. The first step in promoting women’s health is to let them live."

When asked by Blumenthal whether or not she still believes her past statement, Vitter refused to answer, simply saying that she is "pro-life" but would set aside personal and religious views if confirmed. At another point, Vitter was asked about past efforts to get brochures into doctors offices that falsely claimed abortions cause breast cancer and made a dubious connection between women taking birth control and being murdered.

Vitter and family attend her husband David's swearing in ceremony to the U.S. Senate. Photo by Alex Wong/Getty Images.

Vitter is just one of many controversial Trump judicial nominees who would receive a lifetime appointment if confirmed.