Top 5 signs your ancestors were geniuses at beating the heat

We're dealing with the climate now. But it's not the first time... 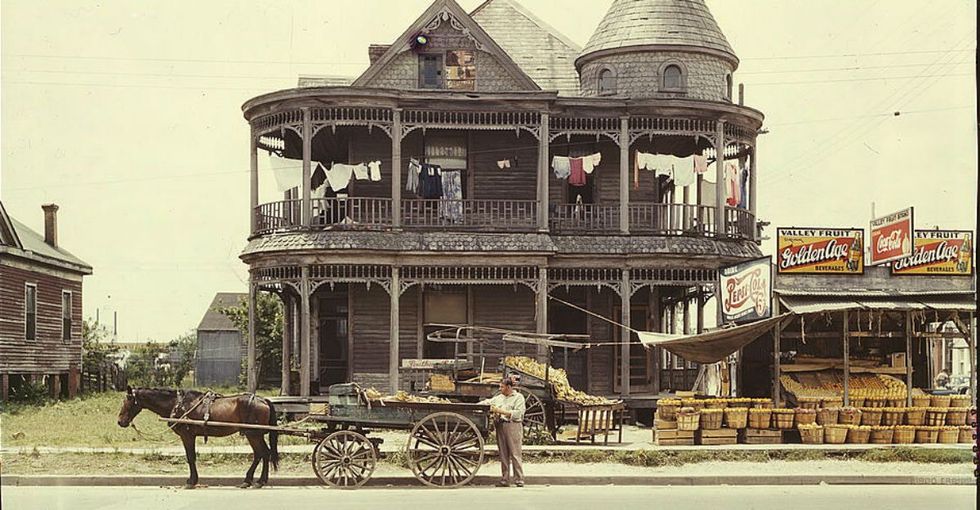 Before air conditioning in the latter half of the 20th century, humankind didn't just suffer in the heat. We met the heat with creativity and a whole lot of cool.

Let me just say it: I love AC. I even own a T-shirt with an AC unit on it. I love my AC that much. Yes, AC feels good, but the fact is, it isn't all that great for the environment.

That's why I was so impressed to discover that the generation before AC was implementing lifestyle climate hacks and wide-scale architectural and infrastructure changes that truly give me and all of us AC addicts a run for my air-conditioning-loving money.

Our ancestors were smart! Here are my favorite five tricks from the past for dealing with climate, aka...

The top five signs your hot weather ancestors were complete geniuses at beating the heat.

There's a strategic way to do it. A 1984 paper from the University of South Florida discusses the Southern tradition of intentional planting when it comes to keeping cool:

"Southerners would always try to plant theirs on the east and west sides of their homes, to protect from the rays of the rising and setting sun."

#2: They built things in special ways.

We're not talking small-scale here — these are huge changes. These are engineering feats to create ventilation, to avoid interior heat buildup, and more.

William Cooper, a professor at Louisiana State University, told the Boston Globe about some architecture techniques, such as building houses specifically for air circulation:

"People with the means to do so used to construct homes that stood several feet above the ground, in order to get air circulating under the floor. ... They had long halls through the middle of the house, so if you opened a door at each end, you got a breeze coming through, and you'd have windows on the sides so you'd get cross-ventilation.'"

Image of the Marcella Plantation in Mileston, Mississippi, via the Library of Congress/Flickr.

And here's a nice equality moment. Fancy folks and non-fancy folks alike benefitted from these feats of engineering. Note how this more humble abode above has both a porch and ventilation underneath!

More architectural feats include huge, wide eaves and awnings for shade, high ceilings for the heat to rise, and huge porches to block out sun and heat. Even in the North, folks would open the basement and top-floor windows of the home to create a vertical airflow that acted like a chimney, but for heat. Hot air comes in the basement and escapes out of the top floor!

These lifestyle climate hacks from past generations weren't just green before it was cool — they were beautiful.

Check out this turret, designed to give airflow to the hotter top floors of this old home (remember, heat rises!)...

Kinda gorgeous, right? But you know there's a nice breeze up there for those hot Kansas summers. Image via the U.S. National Archives/Flickr.

...and this two-story porch!

Beautiful AND functional. Image via the Library of Congress/Flickr.

This generation was creating BEAUTIFUL, reusable things out of necessity. While we walk around complaining about rising temperatures (but not really doing anything to stop it — cough, cough, climate deniers!), a look at our grandparents shows us how smart and environmentally friendly we can be when we put our minds to it. At least, that's what they did.

They're for airflow — and a scientific understanding of hot vs. cool air.

Have you heard of a transom?

Image via the U.S. National Archives/Flickr.

I hadn't, but I had seen them. They're those windows above your door that allow hot air to circulate to higher floors in the house. On exterior doors, transoms even had special hardware. This wasn't just a life-hack — it was a full-on craftsman tradition, complete with special engineering.

In addition to transoms, double-hung windows are another innovation.

These are a huge staple for warmer/scorching climates. They open from the top to let heat out during the day and from the bottom to let in cool night air when the sun sets.

These guys were doing fancy roofs waaay before it was cool. Their roofs were made of reflective materials and were lighter in color.

Imagine that in contrast to the darker asphalt roofs that are so common now.

#5: They adapted their habits (and had fun).

Older generations didn't lean against the winds of climate — they walked with it, adapting in myriad ways.

From the huge, thick drapes to cover their big windows during the day, to the way they changed the way they opened those windows, to even just carrying a fan everywhere ... they were adapting and making newer things the norm as they found creative solutions to dealing with climate.

And let's not forget the best adaptation: hanging out on the porch. Some folks would even sleep on screened-in porches in the summer.

You could also knit and flirt, like these folks from the early 1900s. Gotta prepare for winter in similar creative ways! Image via State Library of New South /Flickr.

My family's hot weather tradition involves a HUGE iced tea on the porch.

To me, this is heaven. Image via Melissa Doroquez/Flickr.

Not a bad adaptation. Very fun, and so chill.

These old traditions got me thinking: If they managed to find ingenious ways to cope with climate, we could all get together again to deal with it, right?

The fact is, we can't all run out and build a second story on our porch or cut a hole in the wall above our door. But individually, we can make small changes and adaptations to our habits. And generationally, we can work together and innovate to find new ways to deal with our climate that are just as beautiful and fun as our grandparents did.

Not sure if anyone will ever invent anything better than a shady porch and cold iced tea on a hot day, but I'd like to see us try.