To help her gay son, this amazing mom carried and gave birth to her own granddaughter. 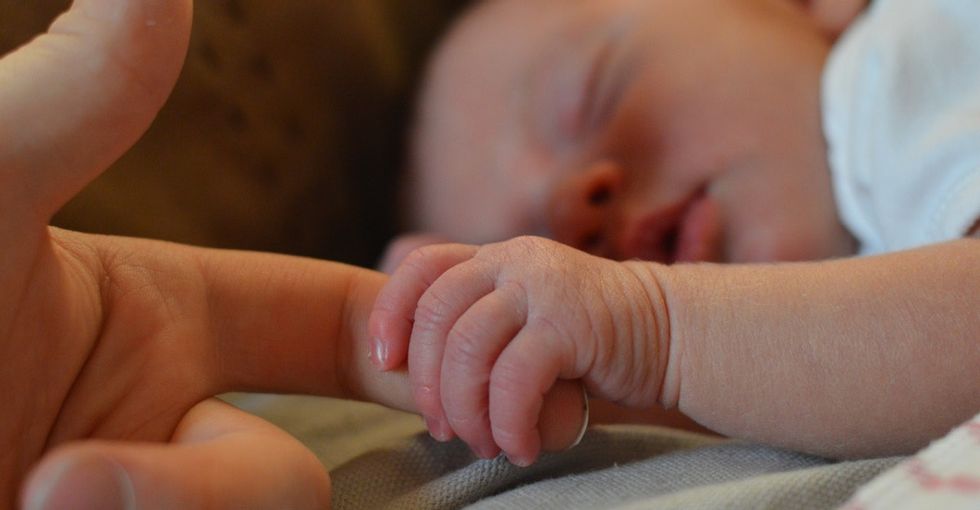 Like many gay couples, Matthew Eledge and his husband Elliot Dougherty desperately wanted to have their own children. But being in a same-sex relationship called for them to be a little more creative in how they achieved that dream.

At 59 years old, Matthew’s mother, Cecile Eledge, was supportive and excited to be a grandma. So excited — that she offered to serve as the surrogate and carry her own grandchild.

While it began as sort of a family joke, eventually the idea grew into something inexplicably wonderful. Eledge and Dougherty’s daughter Uma Louise.

"It just seemed like a really beautiful sentiment on her part," Elliott told the BBC. "She's such a selfless woman."

However, the fertility specialist, Dr. Carolyn Maud Doherty,  listed it as a realistic possibility. So she had Cecile come in for a few tests, all of which she passed.

“She’s 61 years old and has lower blood pressure than the rest of us,” Matthew told Buzzfeed News.

Cecile got pregnant after the first embryo transfer (Matthew’s sperm and an egg from Elliot's sister Lea), and on March 25th, she gave birth (naturally) to a 5 pound 13 ounce baby girl.

Their journey to becoming a family was not without struggle though. Elliot and Matthew live in Omaha, Nebraska, where they were no strangers to discrimination.

It’s one of many places where there is no non-discrimination legislation in place to ensure LGBTQ individuals have equal access to employment, housing, education and other resources without being targeted for their orientation/gender identity.

Eledge was even dismissed from his job upon announcing his upcoming marriage to Dougherty years ago. Thankfully his students fought for him, but it shouldn’t have come to that.

Similarly, same sex couples in Nebraska weren’t allowed to act as foster parents until 2017 after a ban was lifted.

The road to parenthood is long and arduous for millions of folks who desire to have children. But for same-sex couples, it’s often paved with more obstacles. When paired with social barriers and a lack of legislation, LGBTQ individuals have to fight two times as hard for their right to parent.

Surrogacy, as Matthew and Elliott found, is a potential solution.

For many same-sex couples like Eledge and Dougherty — and many hetero couples as well — surrogacy can make parenting a biological child a reality.

In the last 17 years, more than 18,400 infants were born via gestational carriers like Cecile.

More and more, gay male couples have begun using surrogacy as a way to have their own biological children. The types of surrogates used range widely — some go through agencies, others find help through family members and friends, like Matthew and Elliott did — but the dream is the same; a chance at biological parenthood.

That said, IVF — which is what prospective parents have to do when they decide to pursue surrogacy — is expensive and therefore limiting in terms of who can really pursue it as an option.

So while LGBT equality is on the horizon, there are still many obstacles in the way, especially when it comes to becoming parents.

We can get closer by making things like health care, family planning, housing, employment and education more accessible, but most importantly, by ensuring each state offers legal protection from discrimination for all.