Time to throw your support behind the U.S. women's soccer team. They deserve it. 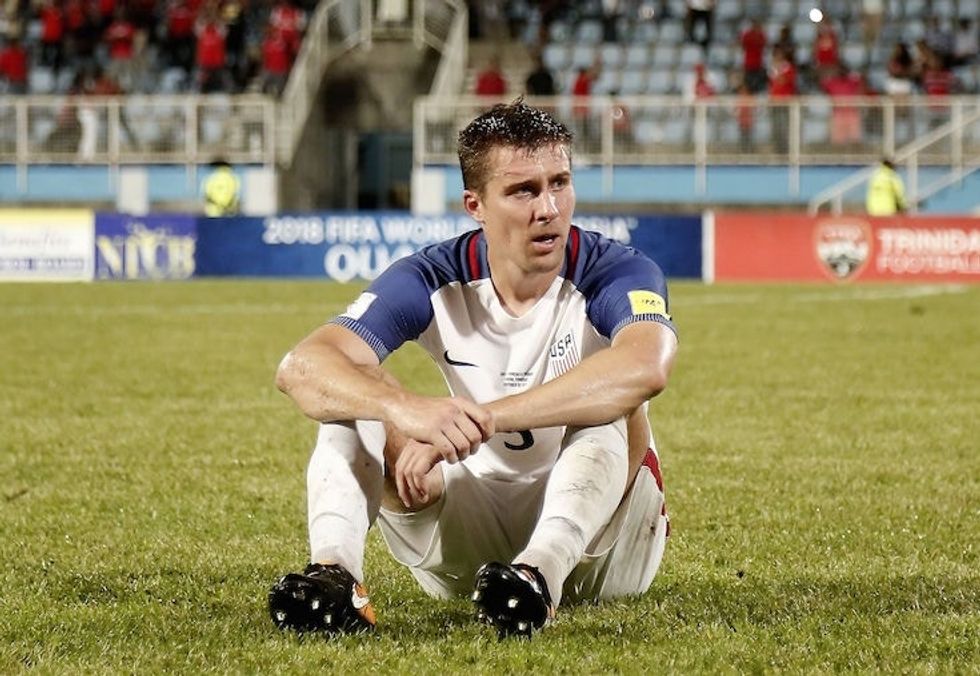 ‌U.S. soccer's Matt Besler after the loss to Trinidad and Tobago. Photo by Abraham Diaz/AFP/Getty Images‌.

When the U.S. men's soccer team was eliminated from this year's World Cup contention, people were devastated. The U.S. Men's National Team's 2-1 loss Wednesday loss to Trinidad and Tobago marked the end of a 31-year run of World Cup appearances by the team (though they've never won).

Social media erupted with outrage, along with hot-headed analysis trying to figure out how we could have let this happen.

Soccer may be less of a national pastime in America than football or baseball, but for fans of the sport in the U.S., this was an apocalyptic moment that had them questioning the very future of soccer in our country.

Yes, the U.S. Women's National Team, which ran away with the 2015 World Cup and has an excellent shot at qualifying for the 2019 tournament.

Yes, the U.S. Women's National Soccer Team that earns about a quarter of what their male colleagues do.

Yes, the U.S. Women's National Team that brings in similar revenue to the men's team when you factor in their recent successes.

Yes, the U.S. Women's National Team that consistently gets far worse training resources, food, and lodging than the men's team.

Yes, the U.S. Women's National Team that, despite the inequalities listed above, responded with grace and dignity as their fellow athletes suffered a crushing loss:

So devastated for the guys, really feeling so terrible for them in this moment. #USAvTRI
— Alex Morgan (@Alex Morgan)1507687275.0

I can only imagine what those guys are feeling right now in that locker room. I feel sick and devestated for them. I’m sorry men #usaforever
— Abby Wambach (@Abby Wambach)1507688219.0

They're still around, gearing up for another World Cup run next year. And they deserve to be more than an afterthought in the conversation about American soccer.

It's disappointing to see the men's team knocked out of contention, but this is the perfect opportunity to support America's real top soccer players.

There are a lot of great conversations to be had about how more diverse athletes can get a fair shake at playing at soccer's highest level. But right now, there are already some terrific American players gearing up for an international showdown. They deserve the support, admiration, excitement, and — yes — even the money that had been set aside for the men's team.

The U.S. women's team has earned the right to be the face of American soccer. It's time to stop prioritizing our mediocre men's team and let the winning women's team shine.