This victim of a horrific acid attack nailed the problem in how we see terrorism.

Jameel Muhktar and Resham Khan were attacked with acid. They need our help. 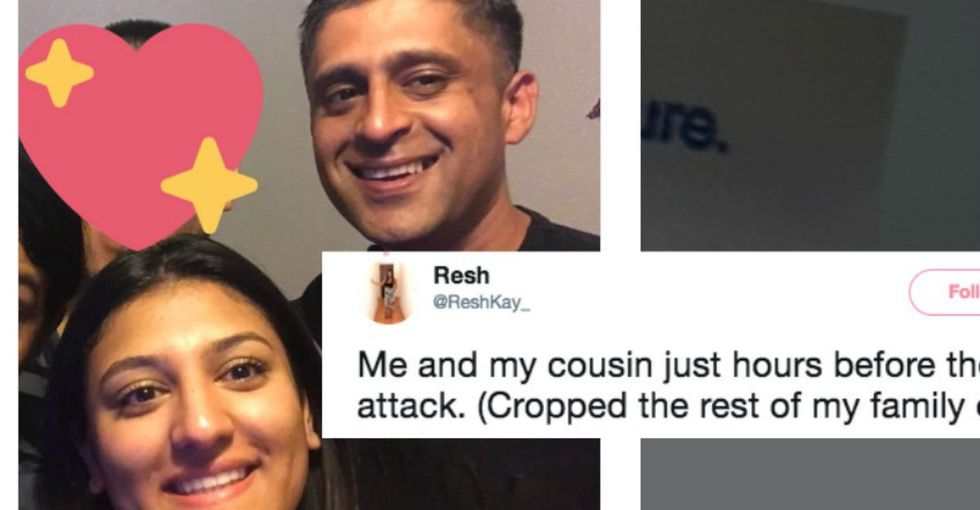 Warning: This story contains graphic imagery from an acid attack.

Jameel Muhktar thought it was some sort of "practical joke" at first. But soon after the 37-year-old rolled down his car window in East London to greet the man who'd been knocking on the glass, he realized the stranger had far darker motives.

"He just squirted this clear liquid over us," Muhktar told Channel 4 News. Then, Muhktar's skin started to burn.

Muhktar had been doused with acid.

Resham Khan, Muhktar's younger cousin who'd been sitting next to him in the car, was also targeted.

Left with severe burns covering large areas of their bodies, Muhktar and Khan, who are both Muslim, needed emergency skin-grafting procedures to repair their overwhelmingly painful injuries.

"I'm devastated," Khan wrote in a tweet thread that's gone viral. "I keep wondering if my life will ever be the same."

The two had been celebrating Khan's 21st birthday the day they were attacked.

The guy Muhktar spoke of is 24-year-old John Tomlin — the reported attacker, known to have ties to the far right.

Even though officials have said "there is no current information to suggest that this attack was racially or religiously motivated,” Tomlin's past comments certainly sows doubt. A Facebook page operated by Tomlin — currently a wanted man in the U.K. — contains posts linked to bigoted, nationalist rhetoric, The Independent reported.

“A sleeping lion can only be provoked so much before it wakes up and attacks," one post from 2015 reads. "And so will us British."

In his interview with Channel 4 News, Muhktar pointed out a sad reality: Why isn't his country reacting the same way it would if he'd been a white man attacked by a Muslim?

“It's definitely a hate crime. I believe it's something to do with Islamophobia. Maybe he's got it in for Muslims because of the things that have been going on lately. ... If this was an Asian guy like myself, going up to a couple in a car ... an English couple, and acid attacking them, I know for a fact and the whole country knows it would be straight-away classed as a terrorism attack."

Muhktar's comment points to a disturbing trend in the U.S. and Europe.

The way we view violence is heavily dependent on who's committing the crime. When a white person, motivated by hate, attacks a person (or people) of a different group, do we perceive it as a heinous act?

We tend not to — even though white, right-wing extremists have killed more people in the U.S. in recent years than jihadists have. We see those acts as crimes committed by "lone wolfs," though — people acting independently of any sort of hate-filled ideology. That's simply not the case.

As anti-Muslim attitudes and violence rise in the West, it's important we get our facts straight.

Fortunately, many people in the U.K. and around the world have been alarmed by Tomlin's acts of violence, and they have rallied behind Muhktar and Khan in their time of need.

Two separate GoFundMe pages have been set up — one for Mukhtar and one for Khan — so that supporters can help the two with mounting medical expenses.

"Although we have faith justice will be served once the criminal is caught, the scars Resham and Jameel will carry will last a life time," reads one of the pages.