This veteran took a 2,500-mile road trip to save his dog's life. It worked. 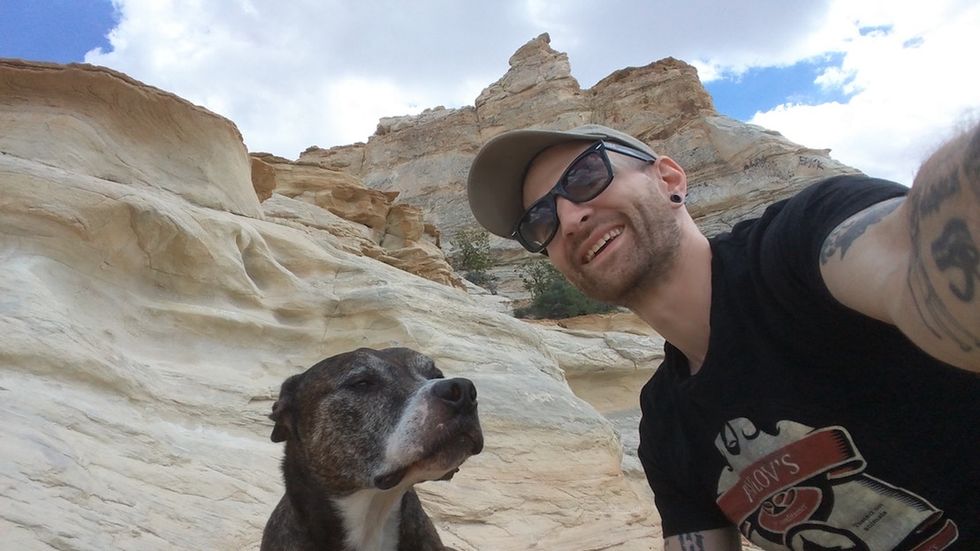 U.S. Army veteran David Broido and his dog Bones have been best buds since Broido brought him home 10 years ago.

Broido was suffering from post-traumatic stress disorder after his service. "It was pretty bad," he says, and he knew that he wanted a canine companion to help him with his recovery. So two years later, he rescued Bones as a puppy from a shelter and trained him to be a service dog. That, he explains, changed everything for him.

(In fact, it wasn't long before Broido's friends noticed Bones' impact on his mental well-being and started calling him Dr. Indiana Bones.)

Over the years, the pair did absolutely everything together.

They'd often dress up in full gear and go to cosplay events.  And when they weren't doing that, they took road trips to fun places like the Whitewater Preserve in Whitewater, California, and the Antelope Valley California Poppy Reserve in Lancaster, California.

Bones taking it all in at the Antelope Valley California Poppy Reserve. Image via David Broido, used with permission.

They also spent their days driving to over 200 historic film locations all across California.

Yes, that's where they filmed the famous drag race scene in "Grease." Image via David Broido, used with permission.

Bones had developed a severe limp in his rear left leg, so, concerned, Broido took him to the West Hills Animal Hospital. After running a series of tests, the veterinarians told him that Bones had osteosarcoma, a type of bone cancer.

Broido was told that the disease was fatal and that the only way to save Bones was to amputate his leg — a procedure Broido couldn't afford.

Needless to say, Broido was devastated, but he knew time wasn't on his side if he was going to save his best friend's life. He couldn't give up. So, he says, "I acted mad fast," immediately researching every possible solution over the weekend.

He soon had a plan: With the help of a GoFundMe page set up by his friends, he would drive cross-country to his home in Philadelphia, where the cost of Bones' surgery would be much lower.

He wasn't sure whether he would raise enough money to pay for both the trip and Bones' treatment, but at the very least, he thought, it would give him one more epic adventure with Bones.

Even if the trip just served for Bones to be surrounded by friends and family at the end of his life, he knew he had to make the journey special.

"I was fairly positive this was just gonna be the last road trip we were gonna have," explains Broido. "I had to make it really awesome."

So Broido packed his trusty Subaru in L.A. with everything they needed, double-checked all the gear, and hit the road with his buddy.

The trip was one of their most epic:

They went to Arches National Park to see some of Utah's incredible rock formations:

They made sure to visit Ghost Rock in Utah to take in more of the great outdoors:

They definitely, Broido says, had to drive through the Rocky Mountains — it was something he always wanted to do:

They even stopped by the Gateway Arch in St. Louis:

And to really get in the spirit of a road trip, they even slept in the back of Broido's car in a Walmart parking lot in Kansas:

While they were on the road, something Broido didn't expect happened: The community had come together to help save Bones.

"By the time that I had gotten home, [the GoFundMe page] had reached its original goal," Broido remembers, meaning that he could afford to go ahead with the expensive procedure to save Bones.

And the surgery at VRC Hospital was a success.

Today, Bones is recovering well, says Broido. Soon, they'll be outfitting him with a cart to help him walk.

It was a whirlwind month, for sure, but more than anything else, Broido is excited that he can still go on countless more adventures with his best buddy.

For Broido, Bones' story is the perfect example of the power of people coming together.

"There isn't any way I'm ever gonna be able to thank all these people," he says. "There's no amount of words that are appropriate for this."

That's why Broido understands — more than ever before — that it doesn't take much to pay it forward. Even if it's the smallest act of kindness, for Broido, what matters is that you're making a positive impact on people's lives.

"It doesn't really cost much to make somebody happy," he adds. "It costs a lot to make somebody angry or upset, you know what I mean? It costs way more to be stressful and angry than it does to just be happy."