This tiny piece of paper can keep fruits and vegetables fresh 2 to 4 times longer. 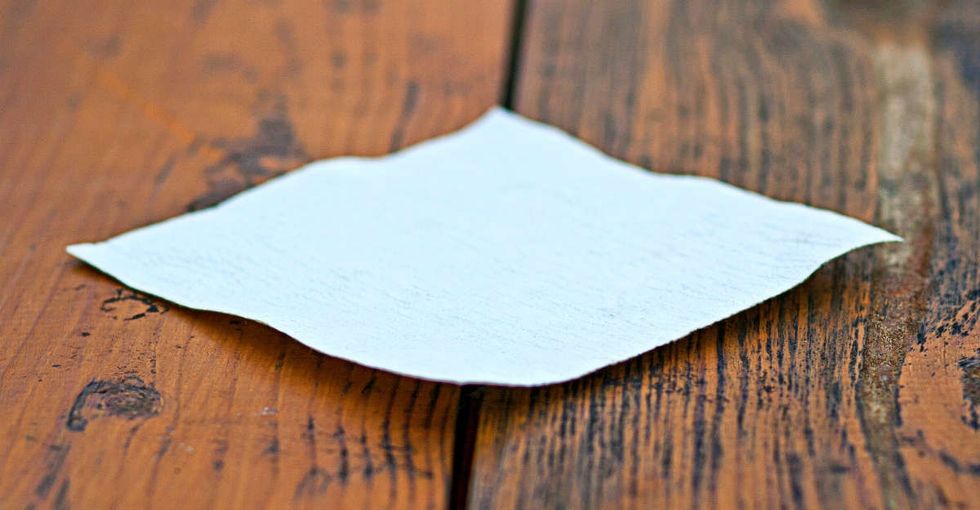 This small sheet of paper could help remove one of the biggest obstacles to getting fresh food to those who need it most.

All photos via Fenugreen, used with permission.

It's called FreshPaper, and according to inventor Kavita Shukla, it preserves fruit and vegetables two to four times longer than conventional storage methods.

Shukla came up with the idea when she was 12 years old while visiting her grandmother in India.

Shukla as a toddler with her grandmother in India.

After accidentally drinking a glass of water from her grandmother's tap despite having been warned before to drink only purified water, Shukla began to fear she would get sick.

"My grandmother didn't have a lot in her kitchen, and she came back with this murky brown mixture, which was kind of like a spice tea," Shukla told Upworthy.

Shukla drank the tea and didn't get sick. And while there is no way to know if the tea really helped or not, it gave her an idea: Certain spices have antimicrobial and antifungal properties.

Could these same spices help prevent food from going bad?

Years later, while Shukla was working on a $300 budget in her apartment, FreshPaper was born. It's a small, paper sleeve infused with some of the same spices in her grandmother's tea mixture. It can go in any container that stores produce, looks similar to a dryer sheet, and is reusable.

"When I first developed it, I really had people like my grandmother in mind," she said.

Despite the fact that millions of people don't have enough to eat, the world wastes a surprising amount of food.

According to a 2014 National Geographic report, up to one-third of all food produced for human consumption worldwide is wasted or lost. The problem is especially acute in areas of the world without adequate refrigeration infrastructure, which causes food to spoil. India alone has to scrap between 30% and 40% of its fruits and vegetables.

"People still go hungry every single day because of all these inefficiencies in food distribution," Shukla said.

It's a problem that is familiar to many American families as well.

"Mostly when we are talking to people who are living paycheck to paycheck, the food-purchasing decisions they're making are entirely based on what they can afford, and sometimes it's not a good economic choice to buy fresh fruits and vegetables," Shukla said. The quicker food spoils, the less cost-effective it can be for a struggling family.

Shukla and a partner first began selling FreshPaper at a farmers market in Cambridge, Massachusetts.

According to Shukla, they were shipping the product all over the U.S. and to over 30 countries worldwide within a year. As of Oct. 29, 2015, FreshPaper boasted an average 4.3 out of 5 stars on Amazon.

"This is an amazing product. It does exactly what it says and keeps berries fresh much longer," writes one reviewer.

For Shukla, however, bringing the product to market is just the first step. Other products can preserve perishable produce after all, but many are non-biodegradable or require refrigeration. Shukla hopes to leverage FreshPaper's simplicity, accessibility, and environmental friendliness into a truly global social enterprise that can help bring much-needed aid to hungry people around the global.

A cheap, effective method of preserving perishable food could be a godsend for people who don't have consistent access to refrigeration.

Shukla is currently looking to partner with food banks and NGOs to make the technology accessible to families in need.

In the meantime, FreshPaper is a finalist for the chance to win a Super Bowl ad and is actively seeking votes. Shukla hopes this will increase visibility of the product and help start a discussion around food waste.

That discussion comes not a moment too soon.

For the many families around the world who struggle to put food on the table, any help is much needed and long overdue.

"FreshPaper's creative solution to cutting food waste is needed in light of the fact that about 40 percent of our hard-working farmers' produce never reaches our stomachs," Dylan Menguy, spokesperson for the Washington D.C.-based Capital Area Food Bank told Upworthy in an e-mail. "As technology evolves, we are glad to see creative solutions to this heartbreaking problem."