This telling chart shows just how much women are crushing the competition in 2018. 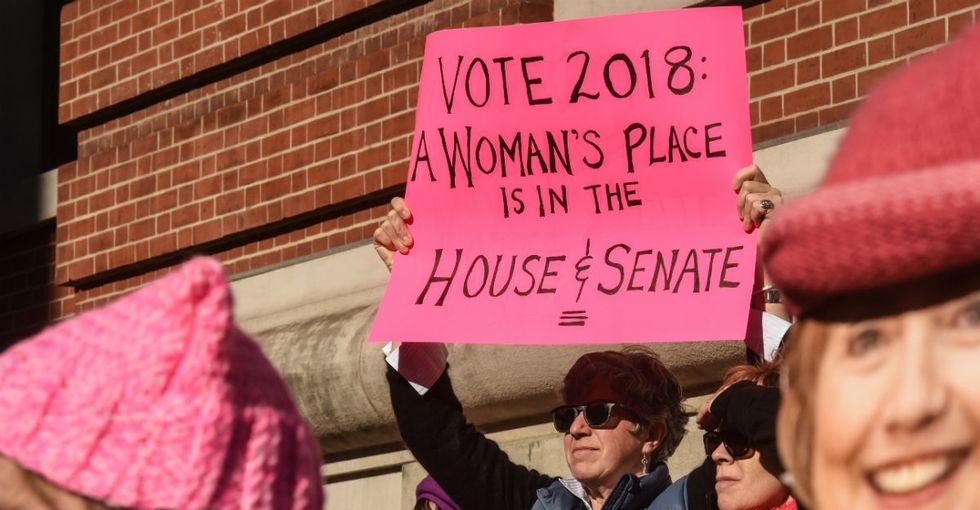 Women are crushing it at the ballot box this year. Full stop.

There have been a lot of buzz and punditry about the surge of women running for office in 2018. But with each passing primary leading up to the midterms, we're getting a clearer picture if "the year of women" will truly shift congressional gender makeups across the country or if it's just an overblown talking point.

Voters in pivotal June 5 primaries across eight states — including delegate-rich California — continued turning the hypothetical hype into an electoral reality.

In California alone, 30 women will head to general election match-ups in November, including Sen. Dianne Feinstein. Notable first-time candidate and former Navy pilot Mikie Sherrill won the Democratic nomination to represent her district in New Jersey. And in New Mexico, voters chose female candidates to head to midterm contests in two of the state's three House races this fall.

One telling chart shows just how well female candidates have performed throughout 2018.

The graphic, shared on Twitter by Dave Wasserman, highlights the fact that women — and particularly Democratic women — are over-performing.

In the chart, every bar is an individual primary race where a woman ran (with Democratic contests in blue and Republican contests in red). The bars rising above the Y-axis represent a woman defeating her opponent, and the percentage by which she did so.

As evidenced by the large block of blue victories toward the right, women are over-performing by an average of 15% in their Democratic primaries thus far. In the Republican primaries, it's 1.7%.

It's easy to connect the dots between broader cultural and political events and a sharp rise in female candidates since the 2016 election.

In 2017, the Women's March evolved from a single day of action into a political force for progressive candidates, and the #MeToo movement empowered survivors of sexual abuse to speak up and organize. Legislative attacks on women's rights — as well as the LGBTQ community, people of color, and other marginalized groups — have helped form a broad coalition representing the resistance. And women are largely leading the way.

In the 65 Democratic primaries where no incumbent was running and at least one man and one woman were on the ballot, women won a whopping 45 contests, Wasserman wrote for The Cook Political Report in May. Men defeated their female challengers in just 18. (Two such elections are headed to runoffs; women were the top vote-receivers in both.)

Women of diverse backgrounds and experiences are making impressive strides.

In Alabama, a historically high number of black women are running for office. Transgender women in places like Virginia and Minnesota have shattered glass ceilings. On June 5, 27-year-old lesbian Julia Fahl upset her male primary challenger to win the mayorship race of Lambertville, New Jersey (incumbent David DelVecchio has held the office as long as Fahl's been alive).

In May, Stacey Abrams became the first black woman in Georgia to be nominated by a major party for governor. If she wins in November, she would be the country's first black female governor.

To be sure, there's still work to be done — before and after November 2018.

Women — and particularly women of color, LGBTQ women, and disabled women — are still underrepresented in Congress. These primaries and the upcoming midterms won't counter the lopsided gender paradigm that's made state Houses and D.C. itself such (white, straight, abled) boys' clubs for centuries.

But it could change things for the better in big ways. And it starts at the ballot box.

Are you ready for the upcoming elections in your community? Make sure you're registered to vote.