This prediction about the 22nd century may leave you — and the Earth — out of breath. 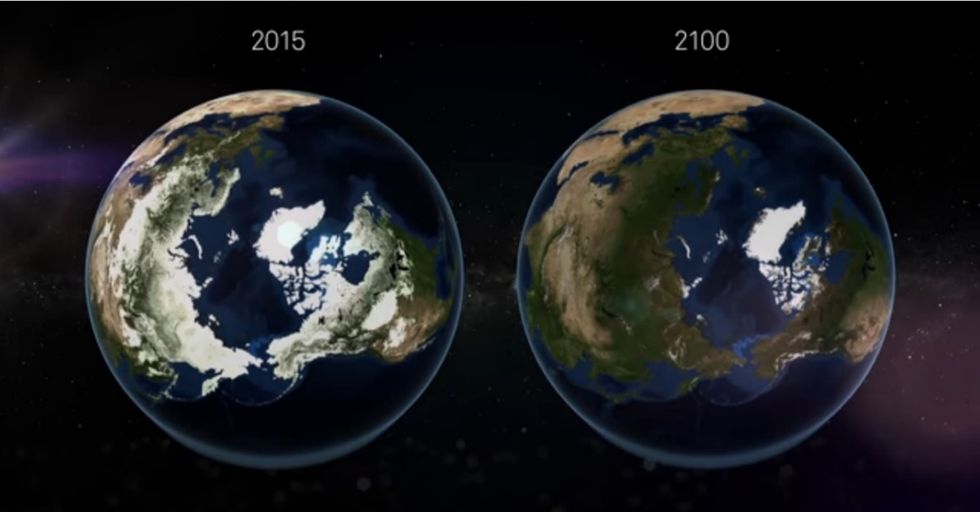 The Earth has a rhythm. During the summer, plants and algae grow and create oxygen. In the winter, some of the carbon dioxide they've absorbed is released back into the atmosphere.

It's almost as if the Earth were breathing.

A 12-month breath. GIF via Good.is/YouTube.

But climate change may give the Earth planetary asthma.

That's the message of a new video from Good.

More than half of the Earth's oxygen is created by tiny plants and algae on the ocean surface called phytoplankton. Most are so small you can't see them without a microscope. But we depend on them to breathe.

Plankton don't like warmer waters, which is what we're headed for.

The oceans of 2100 will be much different than today's. Image from Good.is/YouTube.

In fact, a 2010 study in Nature estimated that warming ocean waters may have already wiped out 40% of the ocean's phytoplankton since 1950. And though the numbers differ, most recent publications seem to agree that as temperatures rise, plankton activity will decline.

Low oxygen is associated with a lot of bad things.

As the planet struggles to breathe, we may see consequences all around the world.

Fish need oxygen in the water to live, for example. A loss of ocean oxygen can create massive dead zones full of little more than slime and bacteria. On land, some studies have suggested that oxygen levels play a role in the weather and climate.

Plus, you know, we breathe oxygen...

Take a deep breath. It can still turn out OK.

The Earth is going to get warmer. But we still have some control over how how much. Global leaders are meeting in Paris for the COP21 conference, where they will hopefully come to strong, legally binding agreements to mitigate climate change.

If this made you gasp, sign this petition from the NRDC to demand climate action from our world leaders.