This is a 'transit visibility zone.' Aliens living in it might be able to see us. 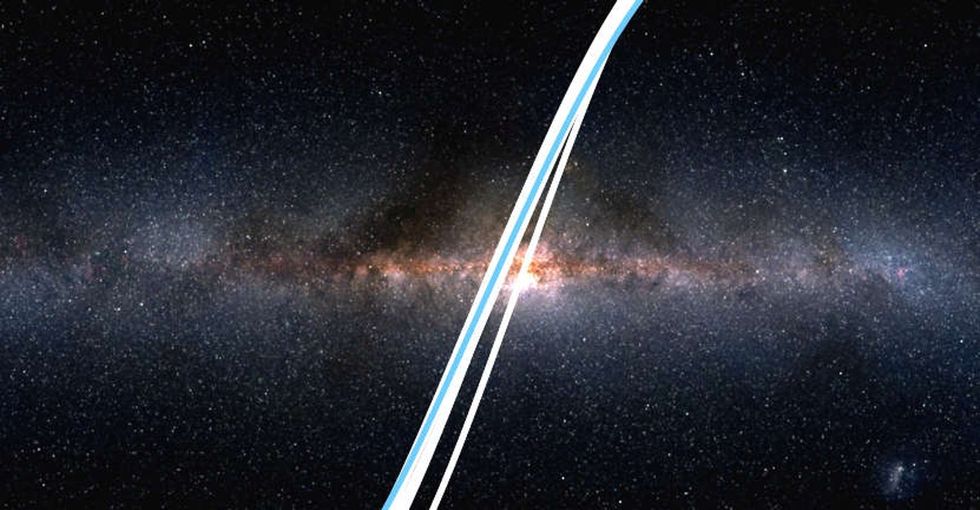 For centuries, human beings have looked at the night sky, hoping to see aliens.

Now, a group of scientists is trying to find out where aliens would have to be in order to see us.

Researchers from universities in the U.K. and Germany have identified nine planets that are "ideally placed" for their resident astronomers to detect Earth using the same methods Earth stargazers use to detect them, according to a new paper published in the Monthly Notices of the Royal Astronomical Society.

The astronomers looked for planets on which observers could view Earth's transit across the sun — the period where, from their perspective, our planet moves in front of its home star, causing it to dim slightly.

An illustration of where an extraterrestrial observer would have to be to notice one of the planets in our solar system passing in front of the sun. Image by 2MASS/A. Mellinger/R. Wells.

The study builds on the work of astrophysicist Rene Heller, who proposed the idea that intelligent extraterrestrial life located in these "transit visibility zones" might already know about Earth in a paper published last year in the journal Astrobiology.

"We've expanded on this by including all of the solar system planets and looking at the known and expected exoplanets in these regions," study lead author Robert Wells, a Queen's University Belfast Ph.D. student, says.

The work was made possible by the revival of the Kepler space telescope, which malfunctioned and was nearly left for dead in 2013.

Instead, engineers used sunlight pressure to stabilize the stellar eye later that year. It has since discovered more than 500 exoplanets — joining the more than 2,300 total detected in the telescope's eight-year run.

A digital illustration of a gas giant planet and moon discovered by Kepler. Photo by NASA/JPL-Caltech/R. Hurt via Getty Images.

The next challenge? Finding where ET might actually be listening for that call.

None of the planets identified in the paper have the conditions to support life. The researchers expect to discover more worlds in the prime Earth-viewing zone in the coming months.

"Our hope is to find some planets which are potentially habitable and can see transits of Earth, which I think will be the best targets for SETI," Wells says.

Here's hoping when do we track our galactic neighbors down, they're not the kind we need Will Smith to deal with.

(Thankfully, we have Will Smith — just in case.)