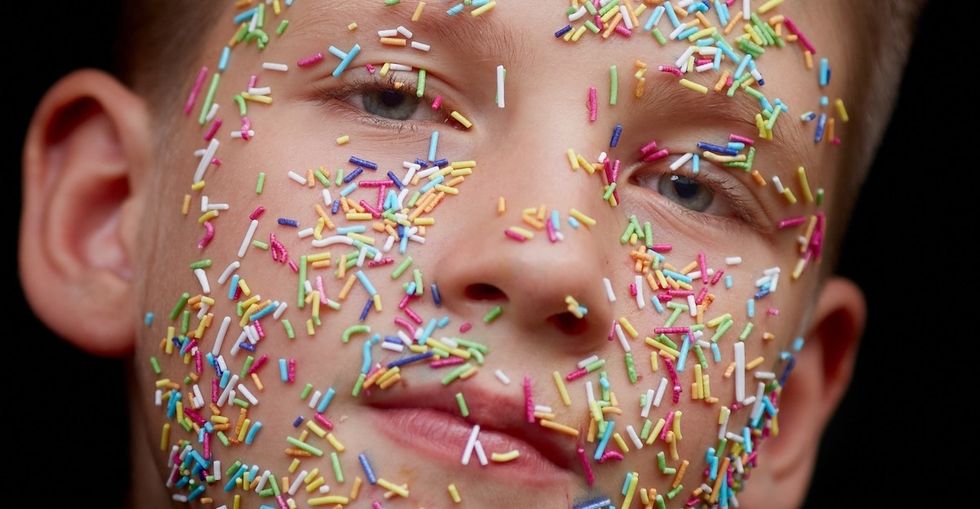 This article originally appeared on 06.20.18

And while it would be nice if men did not need a genetic investment in a female person in order to gain this perspective, lately I've had sympathy for those newly woke dads.

My two sons have caused something similar to happen to me. I've begun to glimpse the world through the eyes of a young male. And among the things I'm finding here in boyland are the same obnoxious gender norms that rankled when I was a girl.

Of course, one notices norms the most when they don't fit. If my tween sons were happily boy-ing away at boy things, neither they nor I would notice that they were hemmed in.

But oh boy, are they not doing that.

In fact, if I showed you a list of my sons' collective interests and you had to guess their gender, you'd waver a bit, but then choose girl.

I imagine many of you are thinking at this point: That's awesome that your boys are interested in those things!

There's more. One loves comics and graphic novels but gravitates to stories with strong female protagonists, like Ms. Marvel and The Unbeatable Squirrel Girl.

And sports. They are thoroughly bored by team sports. They don't play them. They won't watch them. They will up- or down-arrow through any number of sporting events on TV to get to a dance contest or to watch competitive baking.

So? Nothing wrong with that.

Those are the kinds of things all my progressive friends say.

But it's often not the message my sons themselves hear from the other adults in their lives, their classmates, and the media.

For example, the first get-to-know-you question they are inevitably asked by well-meaning grown-ups is, "So, do you play sports?" When they say, "No, not really," the adult usually continues brightly, "Oh, so what do you like to do, then?"

No one explicitly says it's bad for a boy not to play sports. But when it's always the first question asked, the implication is clear: playing sports is normal; therefore, not playing them is not.

The truth is that one of them does play a sport. He figure skates, as does my daughter. When people find out that she skates, they beam at her, as if she suddenly has possession of a few rays of Olympic glory. In the days before my son stopped telling people that he ice skates, most of them hesitated and then said, "Oh, so you are planning to play hockey?"

But it's not just what people say. It's all those pesky, unwritten rules. When he was in second grade, my younger son liked the Nancy Drew and the Clue Crew series. But he refused to check any out of the school library. He explained: "Girls can read boy books, but boys can't read girl books. Girls can wear boy colors or girl colors, but boys can only wear boy colors. Why is that, Mom?"

I didn't have an answer.

An obvious starting point — and the one that we have the most control over — is to change the way we speak to the boys in our lives.

As Andrew Reiner suggests in a spot-on essay, we should engage boys in analytical, emotion-focused conversations, just like we do with girls. In "How to Talk to Little Girls," Lisa Bloom offers alternatives to the appearance-focused comments so often directed at young girls: asking a girl what she's reading or about current events or what she would like to see changed in the world. I could copy-paste Bloom's list and slap a different title on it: "How to Ask Boys About Something Besides Sports."

And with a few more built-in nudges, we might expand the narrow world of boyhood more quickly. Boy Scouts could offer badges for developing skills in child care, teamwork, and journaling. Girl-dominated activities like art, dance, gymnastics, and figure skating could be made more welcoming to boys, with increased outreach and retention efforts. My son could write his own essay about trying to fit in to the nearly all-girl world of figure skating, including the times he has had to change clothes in a toilet stall at skating events because there were no locker rooms available for boys.

I used to think that the concept of gender — of "girl things" and "boy things" — was what was holding us back.

Now I see it differently.

The interdependent yin and yang of gender is a fundamental part of who we are, individually and collectively. We need people who like to fix cars and people who like to fix dinner. We need people who are willing and able to fight if needed and people who are exquisitely tuned into a baby's needs. But for millennia, we have forced these traits to align with biological sex, causing countless individuals to be dissatisfied and diminished. For the most part, we've recognized this with girls. But we have a long way to go when it comes to boys. As Gloria Steinem observed, "We've begun to raise daughters more like sons … but few have the courage to raise our sons more like our daughters."

I acknowledge that young boys feeling pressured to be sports fans is not our country's biggest problem related to gender.

Transgender individuals still confront discrimination and violence. The #MeToo movement has revealed to anyone who didn't already know it that girls and women can't go about their everyday lives without bumping into male sexual aggression.

But if our culture shifts to wholeheartedly embrace the whole spectrum of unboyishness, it may play some small role in addressing these other issues, too. Male culture will be redefined, enriched, and expanded, diluting the toxic masculinity that is at the root of most of our gender-related problems.

Boys and girls alike will be able to decide if they would rather be made up of snips and snails, sugar and spice, or a customized mix. And my future grandsons, unlike my sons, won't think twice about wearing pink or reading about a girl detective at school.

This story originally appeared on Motherwell and is reprinted here with permission.

"And when the night falls, my Squishmallow calls…"

There are two kinds of people in this world—those who Google "nightlife" when they're exploring travel destinations and those with no desire to venture anywhere after 10:00 p.m.

Nothing against those folks who enjoy spending after-bedtime hours in crowded nightclubs, but "nightlife" just sounds like torture to me. Even during my somewhat wild college days, whenever I'd go out dancing late at night with my friends, the little voice in my head would say, "You know you'd rather be curled up on your couch in your jammies right now." And it was right. I would have.

While some introverts may genuinely look forward to a night on the town, I'd venture to guess most of us don't. By the end of the day, our social batteries are usually pretty tapped out, so a quiet evening with a movie or a book is almost always preferable to one that involves trying to make conversation over blaring music and strobe lights.

Dad and daughters take a walk through Disneyland.

“I really want you to experience the magic right now. So let’s try something.”

Pro magician Kevin Li has dazzled audiences, celebrities and even heavy hitters in the industry like Penn and Teller with his impressive sleight of hand displays.

However, Li would tell you that one of his “most memorable” performances wasn’t for a sold out crowd, but for a single person who might normally miss out on his gifts.

A video posted to Li's TikTok shows Li offering up a magic trick to a man who is vision impaired. At first, the man politely declined, saying, “I’m blind, so the magic won’t work for me."

Without missing a beat, Li replied, “I really want you to experience the magic right now. So let’s try something.”

One of the biggest hurdles to deaf people entering the workforce is discriminatory hiring practices, intentional or not.

“There are often layers of discriminatory hiring practices that make [workplace participation] statistics still hold true today,” the study says. “Such practices can range from the discriminatory language on the job ad itself, to the application & hiring process, and can even impact the promotion of deaf employees.”

Meet a mom who takes care of people's babies while they make huge parenting decisions.

This is what it's like to be an 'interim parent.'

This article originally appeared on 04.08.16

I'm trying desperately to be respectful of the person speaking to me, but my husband keeps texting me.

First he sends me a selfie of him with Rafi*, then it's an account of who stopped him on his way into the NICU.