This hilarious 89-year-old's comedy debut is just the laugh you need. 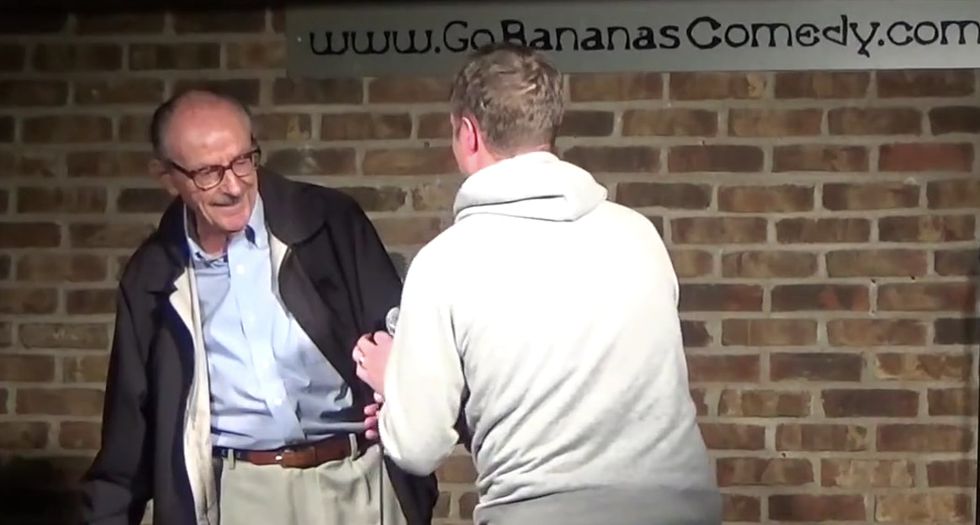 At 89 years young, Chuck Esterly is beginning his career in stand-up comedy.

The elderly man from Cincinnati, Ohio, is hilariously showing that it's never too late to try something new, like ... standing on a stage, in the spotlight, and performing a comedy routine for the first time ever.

Starting strong right out of the gate. All GIFs from MarkChalifouxComedy/YouTube.

How did this even happen?! Well, it's simple. The local Sycamore Senior Center offered a Stand-up 101 class and Esterly just went for it.

Comedian Mark Chalifoux was one of his teachers. He had this to say about Esterly to Splitsider:

"There aren't many new life experiences you can have at 89, so it was really cool of both the Sycamore Senior Center and Go Bananas to put [the stand-up class] together.
I've seen a lot of open-micers at Go Bananas before, but he was calmer and more collected than all of them and it was a delight to watch him destroy on stage."

He pokes a lot of fun at his age while simultaneously breaking stereotypes of what it means to get older.

And when addressing his motivation to be on stage at the Go Bananas Comedy Club in the first place, Esterly laid it out so well:

"I think it's because I'd like to prove to you and to myself that just because you get old, you don't have to stop having fun and surprising things happen every day."

The end of that quote eventually ends in a sex joke, but you get the gist. He's having a blast. What a nice motivator to take risks and mix up our daily routines more often.

We're all capable of a lot more than we think. All it takes is trying.

Thanks Mr. Esterly, for the reminder.

You can check out his full routine here: