This group of friends made an amazing cross-country relay to reunite a mom with her kids. 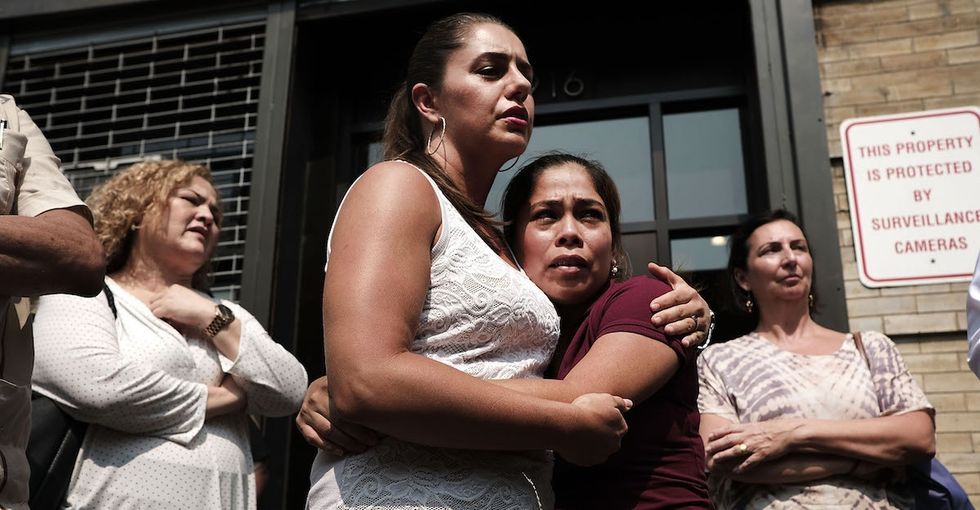 When more than 2,000 children were taken from their families at the border, Julie Schwietert Collazo found it increasingly difficult to sleep.

And as the spouse of a refugee, immigration issues were already intensely personal for her family.

One night, Schwietert Collazo was listening to the radio and heard an interview with the lawyer of a detained Guatemalan mother. Yeni Gonzalez had been separated from her three children at the border while seeking asylum.

"Something he said connected the dots for me about how some parents can be reunified with kids," says Schwietert Collazo. "He explained that Yeni was in a detention facility in Arizona and her kids were known to be in a center in NYC, and that, technically speaking, they could be reunified. She just needed to get to NYC."

Schwietert Collazo wondered what might happen if she tried to make reunification possible for this one family.

She, her husband, and some friends brainstormed and decided they wanted to try to raise bond for Gonzalez, get her to New York City, and support her until her case was heard.

Coordinating with Gonzalez's lawyer, the group immediately launched a GoFundMe, setting an arbitrary goal since they didn't yet know what Gonzalez's bond amount would be. The next morning, they learned it would be $7,500. They had already raised well beyond that overnight.

But money wasn't the only obstacle to helping bring Gonzalez and her children back together. Somehow, the group had to get her from Arizona to New York.

It wasn't as simple as planning a cross-country move. Gonzalez doesn't have a photo ID, so that eliminated the simplest and most obvious option of buying her a plane ticket. The next option — ground travel by Greyhound or Amtrak — could have put her in danger as a lone traveler. So the community got creative.

Schwietert Collazo and the group set up a rideshare relay, moving Gonzalez across the country in vehicles driven by volunteers and stopping in volunteer host homes along the way.

On July 2, Gonzalez arrived in NYC to see streets lined with supporters cheering for her. Accompanied by two elected officials and her lawyer the next day, Gonzalez visited with her children for the first time since their separation.

Gonzalez embraces Janey Pearl, one of the volunteers who helped drive her cross-country to NYC. Photo by Don Emmert/AFP/Getty Images.

A nationwide injunction in June 2018 ordered all separated families to be reunited within a month. The logistics of that order, however, are proving to be nothing but pure chaos.

The injunction ordered all children under 5 to be reunified with their parents within 14 days and all older children to be reunited within 30 days. Even with the private funds and community help she received, Gonzalez's case will likely take longer than that.

For other families, the challenges of reunification are even more overwhelming.

For starters, kids — some of them preverbal — have been moved all over the country with little to no documentation that would be able to link them back to their parents. Additionally, immigration advocates and lawyers report that many parents are simply giving up their asylum claims out of desperation for reuniting with their children.

Some organizations, like the Michigan Immigrant Rights Center (MIRC) are stepping in to help clean up the mess surrounding separated families.

Previously, MIRC handled cases of "unaccompanied minors," defined as adolescents and teenagers who crossed the border alone. Now that very young children separated from their parents are included in that category, MIRC's work has grown more complicated.

Additionally, MIRC managing attorney Susan Reed says that most of the cases she sees unfortunately don't pertain to parents who are eligible for bond, like Gonzalez.

"It's relatively uncommon that people are getting bonds and being allowed to move forward with asylum claims," says Reed. That's because when Attorney General Jeff Sessions eliminated domestic violence and gang violence as grounds for asylum last month, he made it increasingly difficult for anyone to be granted asylum.

In addition, Reed says, prosecutors at the border are aggressive about trying to get people's paths to asylum cut off as quickly as possible.

"So far our clients who've been reunited have been reunited with parents who either have already been deported or are being deported," says Reed. "And even that hasn't been going that well."

As cases like Gonzalez's become less common, it's more important that individuals like Schwietert Collazo to step in and help with reunification where possible.

Getting Gonzalez closer to her children started with one person moving from compassion to action.

Gonzalez walks with members of the team that is helping her reunite with her kids, including Julie Schwietert Collazo, in back. Photo via Sen. Mike Gianaris/Twitter.

The most important thing, says Schwietert Collazo, is to trust the grassroots process.

"Each person who has shown up has been totally empowered to 'own' their part of the process and to be responsible for it," she says. "We haven't needed to lean on or involve any government representatives, and my experience is that when you trust your team, you can get things done more quickly." Her team's plan went from idea to full fruition in less than a week.

Schwietert Collazo hopes that her team's action plan can act as a model that others can use to support more detained parents reunite with their children.

In fact, on July 4, the group launched two more GoFundMe campaigns for two more moms, each one already approaching their $25,000 goal. Her efforts make it possible for others to contribute to the reunification effort by supporting her team or by starting a reunification project of their own in hopes that, eventually, all families separated at the border can be brought together again.