This Disney actress once tried conversion therapy. Now, she's out and proud. 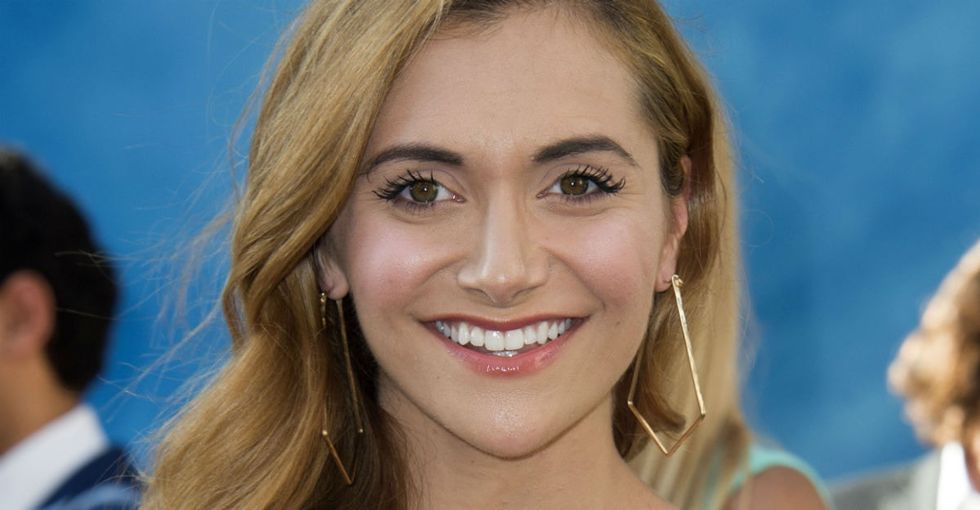 "Do it. Just say something. No, don’t. Don’t stare," actress Alyson Stoner wrote of her fumbling, adorable first thoughts while falling for someone new. "Side-hug and leave."

The now-24-year-old was crushing (and crushing hard) on a dance instructor she'd met at a new workshop. There was just one small — well, overwhelming and disorienting — issue: The instructor was a woman. And these new, uncomfortable feelings were puzzling for Stoner, to say the least.

In a powerful new essay in Teen Vogue, the actress and dancer — known for her roles in Disney Channel's "The Suite Life of Zack & Cody," and films like "Cheaper By the Dozen" and the "Step Up" series — reflected on the first time she fell in love with another woman. It's a story that's equal parts heart-wrenching and delightful.

First came all the relatable feelings of irresistible puppy love.

"My heart raced wildly and my body grew hot," the actress wrote, describing a moment when the instructor corrected her form in class. "Was I nervous to fail in front of an expert? Was I breathing heavily from being out of shape?"

Stoner has some fun on a red carpet in 2017. Photo by Phillip Faraone/Getty Images for Awesomeness.

The two women started to hang out outside of class. They began opening up to one another. They Netflixed (and chilled). Pretty soon, it became abundantly clear: "OK, we were in a relationship," Stoner wrote. "I fell in love with a woman."

But, unfortunately, it just wasn't that simple.

Stoner, a person of religious faith, had to unpack many confusing thoughts. She even attempted conversion therapy to avoid embracing these new feelings.

"Like many, I had internalized some of the harmful beliefs and misconceptions about LGBTQ people and identities," Stoner wrote.

She dissected all the factors that could have led her down this road. Was it because she'd experienced abuse from men before? Was it because she was surrounded by open-minded artists and she — even on a subconscious level — wanted a queer identity to help fit in? "Maybe I actually want to be her, and I'm mistaking idolization for romance," she wrote.

Stoner prayed. She turned to reading — both "contemporary and ancient" texts — hoping the words would leap off the page and make it all make sense. She didn't have many queer-affirming voices telling her these feelings were totally normal and perfectly OK.

"Certain pastors and community members tried to reverse and eliminate my attraction to her," she wrote in Teen Vogue.

Conversion therapy — a harmful practice that aims at altering a person's sexual orientation — has been discredited by every mainstream medical and mental health organization in the U.S., according to the Human Rights Campaign. Not only does it not work, but it can lead to depression, anxiety, and suicide for young people at risk.

"Some people in the industry warned me that I’d ruin my career, miss out on possible jobs, and potentially put my life in danger if I ever came out," Stoner wrote. "My dream and all I’d worked tirelessly for since the age of 6 was suddenly at risk by my being ... true to myself."

Finally, after hitting what felt like rock bottom, things began falling into place for Stoner.

"I’ll never forget the night I finally collapsed on my bed with tear-stained cheeks, saying, 'God, if I’m evil, then I accept this and give up,'" Stoner wrote. "I’ve believed you are loving, but I don’t want to live a lie."

Instead of devastation, however, the breakdown filled her with a sense of hope. She began seeing the world around her — "life, God, love, humanity, and (literally) everything" — in a new light.

"I, Alyson, am attracted to men, women, and people who identify in other ways," she finally felt comfortable proclaiming. "It is the soul that captivates me."

Stoner is one of a growing number of young Americans who feel comfortable coming out as LGBTQ.

According to Gallup analysis published last year, 10 million Americans — or 4.1% of U.S. adults — identify as lesbian, gay, bisexual, transgender, and/or queer. That's up from 3.5% in 2012. Millennials, the analysis found, were the most likely age group to identify as LGBTQ, reflecting the growing acceptance of queer Americans — particularly among young people.

Things really are changing for the better, Stoner believes. And if you're wrestling with your sexuality or identity, she's got your back.

"If you’re questioning or struggling with your sexuality, gender identity, or anything else, know that I and so many who’ve gone before us are with you," Stoner wrote. "Whatever your identity, you are lovable and wonderful and enough. I’m on the other side of some of these battles internally, but it’s still a challenge in the outside world. It’s OK. Dare to be yourself anyway." ❤️

Military spouses often choose their spouse's career over their own. This organization is changing that.

"He didn't say anything about marrying one of them," she says. And so began her life as a military spouse.

The life brings some real advantages, like opportunities to live abroad — her family got to live all around the US, Japan, and Germany — but it also comes with some downsides, like having to put your spouse's career over your own goals.

"Though we choose to marry someone in the military, we had career goals before we got married, and those didn't just disappear."

Career aspirations become more difficult to achieve, and progress comes with lots of starts and stops. After experiencing these unique challenges firsthand, Sue founded an organization to help other military spouses in similar situations.

Sue had gotten a degree in international relations because she wanted to pursue a career in diplomacy, but for fourteen years she wasn't able to make any headway — not until they moved back to the DC area. "Eighteen months later, many rejections later, it became apparent that this was going to be more challenging than I could ever imagine," she says.

Eighteen months is halfway through a typical assignment, and by then, most spouses are looking for their next assignment. "If I couldn't find a job in my own 'hometown' with multiple degrees and a great network, this didn't bode well for other military spouses," she says.

She's not wrong. Military spouses spend most of their lives moving with their partners, which means they're often far from family and other support networks. When they do find a job, they often make less than their civilian counterparts — and they're more likely to experience underemployment or unemployment. In fact, on some deployments, spouses are not even allowed to work.

Sue eventually found a job working at a military-focused nonprofit, and it helped her get the experience she needed to create her own dedicated military spouse program. She wrote a book and started saving up enough money to start the National Military Spouse Network (NMSN), which she founded in 2010 as the first organization of its kind.

"I founded the NMSN to help professional military spouses develop flexible careers they could perform from any location."

"Over the years, the program has expanded to include a free digital magazine, professional development events, drafting annual White Papers and organizing national and local advocacy to address the issues of most concern to the professional military spouse community," she says.

Not only was NMSN's mission important to Sue on a personal level she also saw it as part of something bigger than herself.

"Gone are the days when families can thrive on one salary. Like everyone else, most military families rely on two salaries to make ends meet. If a military spouse wants or needs to work, they should be able to," she says.

"When less than one percent of our population serves in the military," she continues, "we need to be able to not only recruit the best and the brightest but also retain them."

"We lose out as a nation when service members leave the force because their spouse is unable to find employment. We see it as a national security issue."

"The NMSN team has worked tirelessly to jumpstart the discussion and keep the challenges affecting military spouses top of mind. We have elevated the conversation to Congress and the White House," she continues. "I'm so proud of the fact that corporations, the government, and the general public are increasingly interested in the issues affecting military spouses and recognizing the employment roadblocks they unfairly have faced."

"We have collectively made other people care, and in doing so, we elevated the issues of military spouse unemployment to a national and global level," she adds. "In the process, we've also empowered military spouses to advocate for themselves and our community so that military spouse employment issues can continue to remain at the forefront."

Not only has NMSN become a sought-after leader in the military spouse employment space, but Sue has also seen the career she dreamed of materializing for herself. She was recently invited to participate in the public re-launch of Joining Forces, a White House initiative supporting military and veteran families, with First Lady Dr. Jill Biden.

She has also had two of her recommendations for practical solutions introduced into legislation just this year. She was the first in the Air Force community to show leadership the power of social media to reach both their airmen and their military families.

That is why Sue is one of Tory Burch's "Empowered Women" this year. The $5,000 donation will be going to The Madeira School, a school that Sue herself attended when she was in high school because, she says, "the lessons I learned there as a student pretty much set the tone for my personal and professional life. It's so meaningful to know that the donation will go towards making a Madeira education more accessible to those who may not otherwise be able to afford it and providing them with a life-changing opportunity."

Most military children will move one to three times during high school so having a continuous four-year experience at one high school can be an important gift. After traveling for much of her formative years, Sue attended Madeira and found herself "in an environment that fostered confidence and empowerment. As young women, we were expected to have a voice and advocate not just for ourselves, but for those around us."