This artist graffitied the worst tweets he could find, right outside Twitter's office. 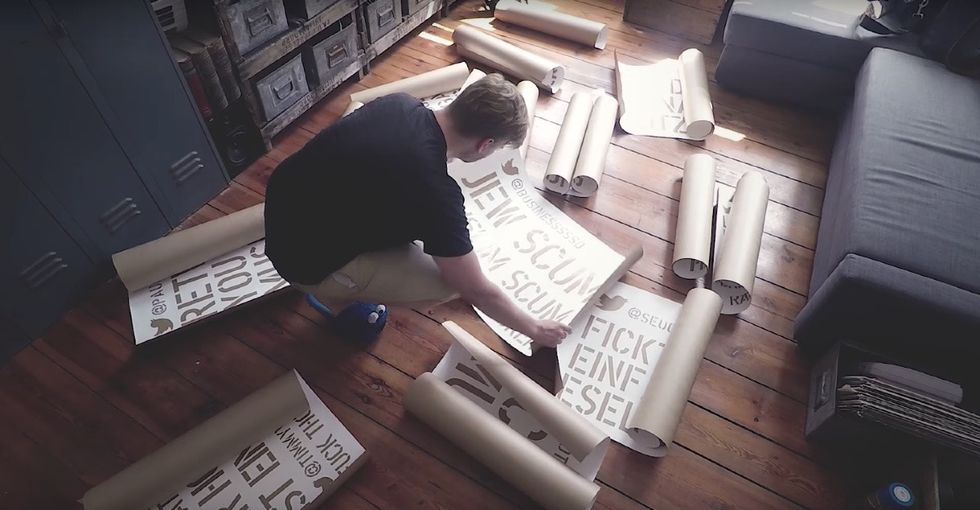 The man's eyes bulge down at the ground. All around him, it is littered with spray-painted, stenciled messages.

Their contents, written in a mix of English and German, are vile. The skin crawls to read them.

"Let's gas some Jews together," reads one stencil.

"Gays to Auschwitz," reads another.

The nose automatically wrinkles just looking at them.

The man shakes his head. "I work in an advice center for Roma and Sinti so we're used to this kind of racist bullshit. But these..."

"These are all tweets," the cameraman says. "Tweets," the man repeats quietly. He seems shocked and a little sad.

For the past six months or so, German artist Shahak Shapira had been reporting and flagging inappropriate tweets like these to little avail.

Shapira used Twitter's reporting to flag about 300 of them, he told The Associated Press. Most of his complaints went unanswered, and whenever he'd check back, the majority of the tweets were still visible.

Feeling ignored and frustrated, Shapira decided there was one sure-fire way to get heard.

Early in the morning, Shapira and a crew of workers arrived on the doorstep of Twitter's German headquarters in Hamburg and proceeded to stencil roughly 30 of the worst ones right on their doorstep.

For a lot of people, this is already what social media feels like. Image from Shahak Shapira/YouTube.

A video of people's reactions to the display was published on YouTube on Aug. 7, 2017. The camera captures a man in a collared shirt walking by. He gazes at the tweets. "It's just disgusting," he says.

For a distressing number of people, stumbling through hateful messages on social media is a daily struggle.

For some, scrolling through our social media feed is relatively benign. The problem of harassment or hateful language can seem unimportant — because it's easy to ignore a problem when you don't see it.

But the truth is that there are many people who do have to see these kinds of things every day. Harassment and online abuse have been a problem for years. A Pew Research poll found that as many as 4 of every 10 internet users has experienced harassment.

And if your job is linked to work on social media, as many of ours are these days, you don't really have a choice about whether you have to see this.

By thrusting this language into the real world, Shapira has made it hard to ignore. If people don't want to tolerate this graffiti on the streets, maybe we shouldn't tolerate it on the internet either.

You can watch the full video below:

Twitter did not comment on the "artwork," although the AP reports that by Aug. 9, about half of the stenciled tweets had been removed online.