This 6-minute graduation speech from a student with autism is a must watch. 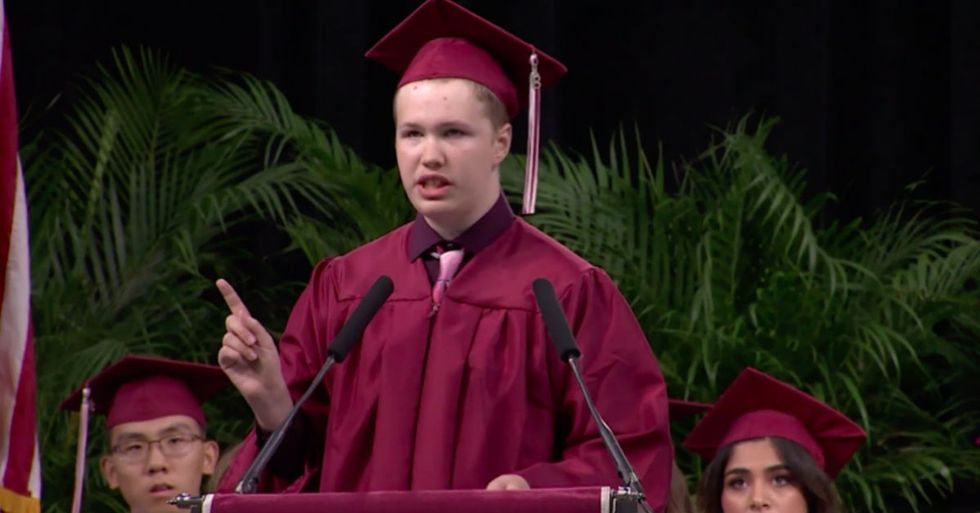 Scott said that simply stepping on stage to address his classmates in Texas was a surprise. During his six-minute speech, he openly shared intimate details about his autism and social communication disorder.

"Just by being here speaking to all of you — me — that alone is unexpected," he said. "While I have the vocabulary that you do, and I have the ability to produce spoken words, it is not a normal feat for me to electively speak."

His address was full of wisdom, humor, and useful suggestions for embracing the "unexpected" in life.

But it was also a powerful reminder that it's OK to be yourself. And that message clearly resonated.

His classmates and those in attendance responded with powerful applause. And they aren't alone. The video of his speech gathered nearly 500,000 views in the first 48 hours since it appeared on Facebook.

#Graduation2018 Happy to share this "unexpected" moment from Saturday's Plano Senior High graduation...certainly the most applauded speech of the day. Sef Scott, Class of 2018.

Scott says he was inspired to give the speech because of his brother.

Scott told the audience that his brother is a brain tumor survivor who has given dozens of speeches to children's charities. It was his brother's own commitment to service that helped inspire him to stand in front of his classmates and open up about his life.

He said his brother and mom helped "line by line" in crafting his address, which also weaved in jokes and suggestions for simple kind acts that can change people's days, like letting a person go ahead of you in line. "That simple gesture could brighten what might have been a gloomy day," he said.

Scott's speech was a moment of sharing about himself to remind that everyone has their own story to tell.

He reminded his classmates that they all have unique experiences and that no one is any single label.

"In front me, I see athletes, musicians and scholars along with shy loners and class clowns," he said. "Many of you fit into more than one of those categories. At the same time, plenty of us have something that makes us all unique. What a wonderful mix."