This 11-year-old wants you to know how vulnerable your electronic devices are. 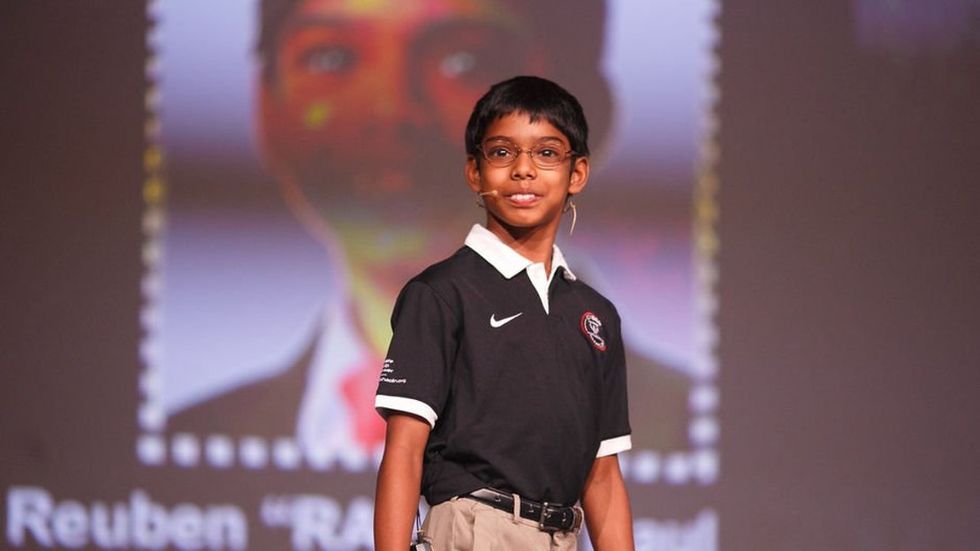 When 11-year-old Reuben Paul took the stage at the International One Conference, the audience didn't know what was in store for them.

In front of the fascinated audience, Reuben proceeded to hack his teddy bear.

The teddy bear Reuben hacked, which he named BOB (standing for Bear-of-Breaches), is no ordinary teddy bear: It can receive and send messages via Wi-Fi and Bluetooth. By plugging a small computer called a Raspberry Pi into his laptop, Reuben was able to remotely control the bear — turning on its light and even its microphone.

"By turning on the microphone and leaving the light off, the teddy bear essentially became a spying device as I could record the conversation in the room," Reuben writes in an email.

"Theoretically I could stand outside someone's house and if the toy is in range, connect to any internet-connected devices ... and spy on them by recording everything that they are saying."

Reuben doesn't regularly hack teddy bears, but he does try to spread the word about how easy it is to weaponize seemingly innocuous items.

Reuben's dad told The Guardian that Reuben's cyber skills started to show at age 6 when his dad explained how a smartphone game worked — and then Reuben realized that it used the same kind of logic as Angry Birds. He later learned how to hack a toy car.

When he was invited to speak at the conference in The Hague, Netherlands, the fifth-grader says he wanted to do something cool and unique. So with the help of his dad, Mano Paul (a cybersecurity expert), Reuben "researched the security of the teddy bear and found the insecurity."

His demonstration got quite the reception.

"I went to Hague to share my research and experiences and did not expect any press," writes Reuben. "But when the local RTL news and Agence France-Presse reported the news and people all over the world came to hear of the dangers of insecure [internet-connected] devices, it felt good to have raised awareness."

Reuben's goal is to get across an important message: To keep our kids safe, we need to be aware of the vulnerabilities of internet-connected devices.

Says Reuben: "In my generation, internet connected devices are making it into kids game room and my 5 year old little brother Ittai and I have a few of them. I wanted to make sure that they are safe for kids (like my brother) to use."

He notes that any internet-connected device can be weaponized if it’s "hackable" — i.e., if it doesn't have the right security defenses or they're not working properly.

He offers some tips for how to protect yourself online:

1. Read up and be more aware of security threats.

2. Don't connect to access points that are public or that you don't know.

3. Check the privacy and location services settings on your devices (tablets, phones, etc.) and turn them off if you don't need them.

As in, don't give out personal information on social media; don't accept anything from someone you don't know ("because there is no free lunch in the real or the cyber world"); and don't trust anyone on the internet, as they are "cyber strangers."

5. Use strong passwords (and don't have a common password).

6. Connect to websites over secure channels.

7. Patch your systems with the latest security updates.

As for his plans, Reuben has a full slate this summer.

He has received inquiries from kids and their parents wanting to know more about cybersecurity, so with the help of his parents, he started CyberShaolin, a nonprofit that aims to "educate, equip, and empower kids and adults with the dangers and defenses of cybersecurity." They make videos that are understandable for kids and adults alike, and he plans to work on more during the summer.

He has also already received a number of invitations to keynote conferences around the world (including in Singapore, Poland, and Prague). And he wants to learn programming.

But don't worry — he's also got some "me time" planned. "Over summer," he writes, "I plan to play a lot of video games with my brother, read books and just relax."

As for his long-term goals? Reuben says he wants to use his cybersecurity knowledge and skills "for the good of humanity." His ideal job is as a businessman by day, making video games and apps, and a "cyber spy" by night, helping protect the country from cyber threats. He'd also like to become an Olympic gymnast.

He adds, practically, "I don't know if these will become realities, but for now, I am just going to take it one step at a time."