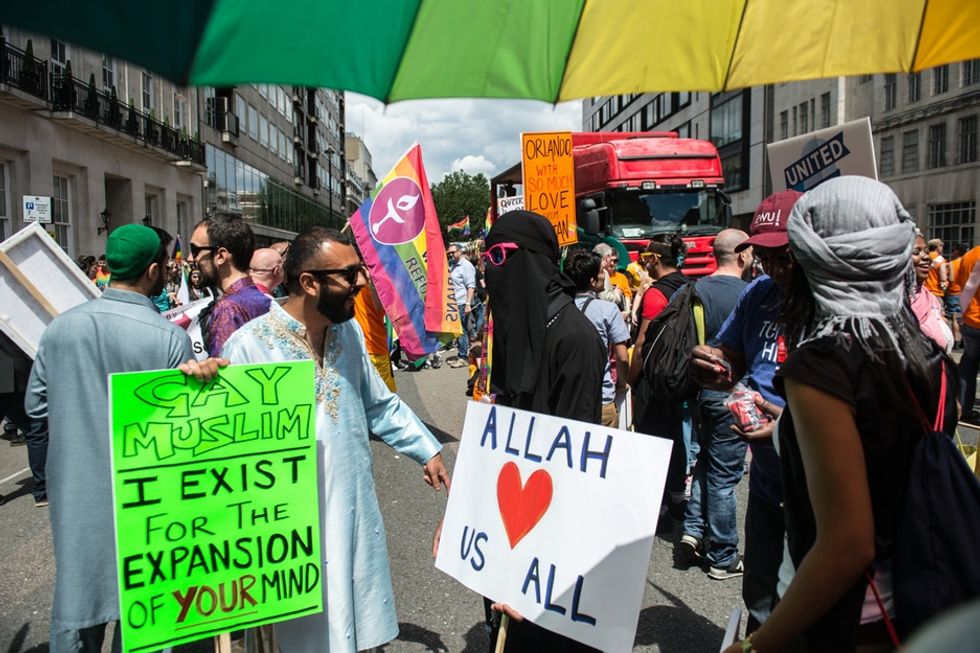 Every year, Pride serves as an opportunity to celebrate inclusivity, tolerance, and acceptance in the LGBTQ community.

For queer Muslims, Pride month is all the more special.

Since traditionalist views of Islam consider homosexuality a sin, it's a common myth that you can't be both queer and Muslim. But every year, tons of practicing Muslims who identify as queer come out and engage in self-affirmation of their complex, intersecting identities.

This is Luska with Muslims for Progressive Values in New York sharing what #Pride means to her. #nycpride https://t.co/YBST5wugyX
— NBC Out (@NBC Out)1529868141.0

If there's one thing that Pride month's proved so far, it's that being LGBTQ and Muslim are not mutually exclusive.

Now more than ever, Muslim-American citizens are rallying together to support the LGBTQ people within their community.

A recent study revealed that 51% of Muslim-Americans support marriage equality, according to the May 2018 Public Religion Research Institute study. This is a huge leap from four years ago, when that same percentage were opposed. To put numbers into comparison, according to the study's findings, marriage equality is opposed by 58% of white evangelical Christians and 53% of Mormons.

Queer Islamic scholars and imams have also risen to prominence. Daaiyee Abdullah, based in Washington, D.C., is one of the eight openly gay imams in the world. He is known to offer religious services to Muslim LGBTQ members who have been turned away or cast out from the community.

I feel very meaningfully included in the LGBTQ community. Though I am often the only Muslim in queer spaces, I am n… https://t.co/zsJKABRmfi
— Blair Imani (@Blair Imani)1525465566.0

Despite this outpouring of visibility, queer Muslims face discrimination at every turn.

Laws in many Muslim-majority countries are influenced by these religiously driven homophobic beliefs. Same-gender marriage is often not only illegal, but being queer can warrant prison time or even death. These threats keep many Muslims in the closet.

In the U.S., with the sweeping tide of Islamophobia, the "not-a-Muslim-ban" Muslim ban, and an administration adamant on rolling back LGBTQ rights, queer Muslims' safety is constantly at risk.

These realities are daunting. But the swell of support during Pride of religious tolerance and LGBTQ acceptance proves that progress is being made.

If all people can set aside differences and see each other as fully human, the future will be bright.

happy pride friends! my heart goes out to all the queer muslims out there who are struggling to reconcile their fai… https://t.co/zCzv9JJvj1
— Ruby Hye (@Ruby Hye)1529872454.0