These students surprised their favorite teacher with an incredibly meaningful gift. 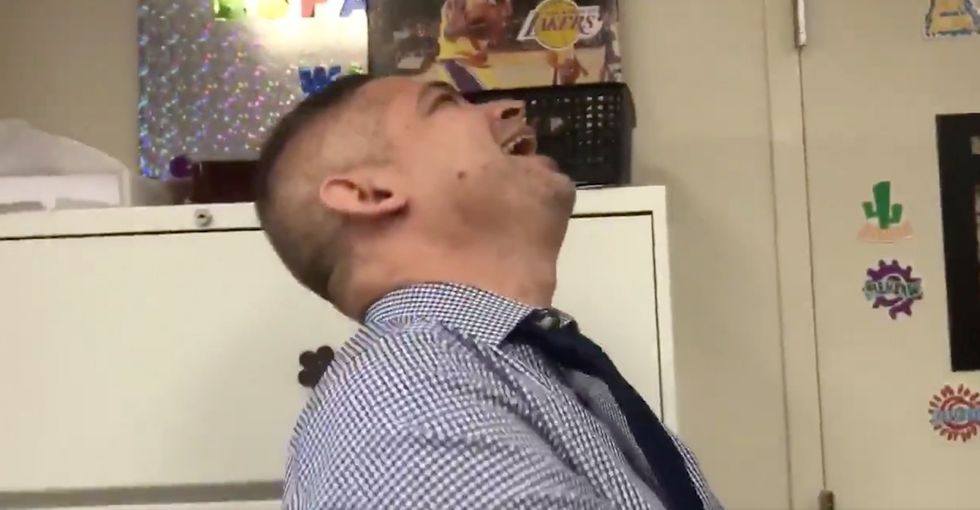 Everyone has a story about an educator that shaped their life in an important way.

Think about your favorite teacher in high school. Was is the English instructor who wrote meticulous notes in the margins of your essays? The math teacher who tutored you in geometry every Thursday at lunch? The history teacher who was so passionate about their subject they'd show up to class dressed as important historical figures?

For the students at Valley Christian High School in Arizona, that person was Joe Lara, a Spanish teacher who some students saw not just as an instructor, but a father figure.

"Throughout the year Mr. Lara has been such a great blessing to me," one student wrote on Instagram. "He sees potential in all of his students, and he has seen things in me that I haven’t even seen in myself. He’s believed in me at times when I didn’t believe in myself."

When Lara announced that he was leaving the school, his students knew they had to do something special to thank him for everything he'd done for them.

It's always difficult when a teacher you love leaves. And sometimes, when you think about them years later, you wish you'd done something to show them just how much you cared. Lara's students? They won't have that problem. On his last day (which also happened to be his birthday!) they gave him a surprise he'll never forget. One that's so big even Michael Jordan's brand tweeted about it.

Have you guessed what the surprise was yet? If you thought "A pair of pristine Air Jordans," you're absolutely right! According to his students, Lara has wanted a pair of the shoes for over a decade. But considering how expensive the shoes are (especially in comparison to how much teachers typically make) he could never justify the expense. So everyone chipped in to buy them as a way of saying "thank you." The heartwarming moment was captured on video and has now been viewed millions of times.

Are you ready for this? (Yes, I'm absolutely referencing Jock Jams. Why don't you hit the play button on this baby before you watch the video below. Really, get yourself pumped up!)

It's hard to tell who's happiest here — the teacher who's unwrapping a pair of 2012 retro Jordans, or the students anxiously waiting for Lara's reaction.

"I need scissors," Lara says as he's unwrapping the gift.

"No you don't," students scream back. Then Lara uncovers the box.

"No way," he exclaims shortly before being overcome with emotion. "You didn't!"

You know what, though? They absolutely did. And when he sees those shoes for the first time, the entire room descends into howls, with Lara leading the noise.

my spanish teacher is leaving next year and today was his birthday so we surprised him with his dream shoes. he ha… https://t.co/j8OPiXtnE9
— sailor (@sailor)1524685035.0

And they weren't the only ones feeling it.

Thank you for your dedication to the next generation of flight, Mr. Lara. We're honored to be a part of your classr… https://t.co/dRcWFXNeCO
— Jordan (@Jordan)1524852640.0

This story is sweet, but it's also an important reminder of the value teachers bring.

Our favorite teachers don't just recite from a textbook. They don't just prepare us for tests. They care, they listen, and they project their passion. They mentor, they counsel, and they encourage us to become the adults we want to be. They give us the tools to make our dreams come true. And yet, too often, they're undervalued. In recent weeks, teachers have walked out of their classrooms to protest that they don't have the resources to do their jobs.

As one Oklahoma educator pointed out in a viral Facebook post, teachers don't have enough books, their classes are too large, and sometimes the low pay can force qualified teachers to leave the profession.

Teachers like Lara are rare, but they shouldn't be. And no one will disagree that kids deserve the very best. That's why we must all support educators. Because the difference they make can't be measured or quantified.  And hey, if we get a video like this every day, you won't find me complaining.