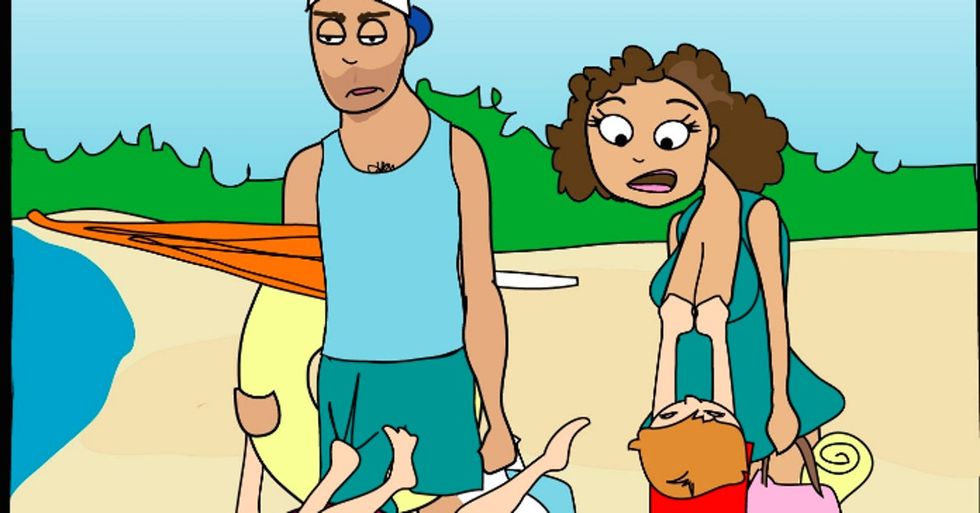 This article originally appeared on 11.30.16

He had just learned it at school, her son explained as they sat around the dinner table one night. It was the idea that "an object at rest will remain at rest until acted on by an external force."

"It struck me that it sounded an awful lot like him and his video games," she joked.

A writer by trade and always quick to turn a phrase, Norine grabbed a pen and scribbled some words:

"Newton's First Law of Parenting: A child at rest will remain at rest ... until you need your iPad back."

And just like that, she started creating "The Science of Parenthood," a series that names and identifies hilarious, universal parenting struggles. She put in a quick call to her friend Jessica Ziegler, a visual and graphics expert, and together the two set out to bring the project to life.

Here are some of their discoveries:

Norine and Jessica's work struck a nerve with parents everywhere.

Norine said almost every parent who sees the cartoons has a similar reaction: a quiet moment of recognition, followed by a huge laugh as they recognize their own families in the illustrations.

But is there more to it than just getting a few chuckles? You bet, Norine and Jessica said.

"Even, at the worst possible moments, you're standing there, your child has just vomited all over you, or you've opened up the diaper and your kid is sitting waist deep in liquid ****. Even at that moment, it's not really that bad," Norine said. "You will be able to laugh at this at some point."

"It gets better. You're not alone in this parenting thing."

A group of baby penguins are being cared for by surrogate parents.

Sometimes you need a helping hand to have the best possible start. That's what's happening with five baby Humboldt penguins at the ZSL London Zoo in England.

Zookeepers have stepped in to help care for the newest inhabitants of the zoo's Penguin Beach after it was discovered their parents were struggling a little. The keepers have become the penguins' parents, hand-rearing the little penguins in the zoo's nursery.

"During the breeding season, we check the nests on Penguin Beach every day, keeping an eye out for any chicks who might not be feeding enough or whose parents are struggling to care for their brood," ZSL London Zoo penguin keeper Suzi Hyde explained in a statement from the zoo.