The unforgettable moment when Chadwick Boseman gave his MTV award to a real-life hero. 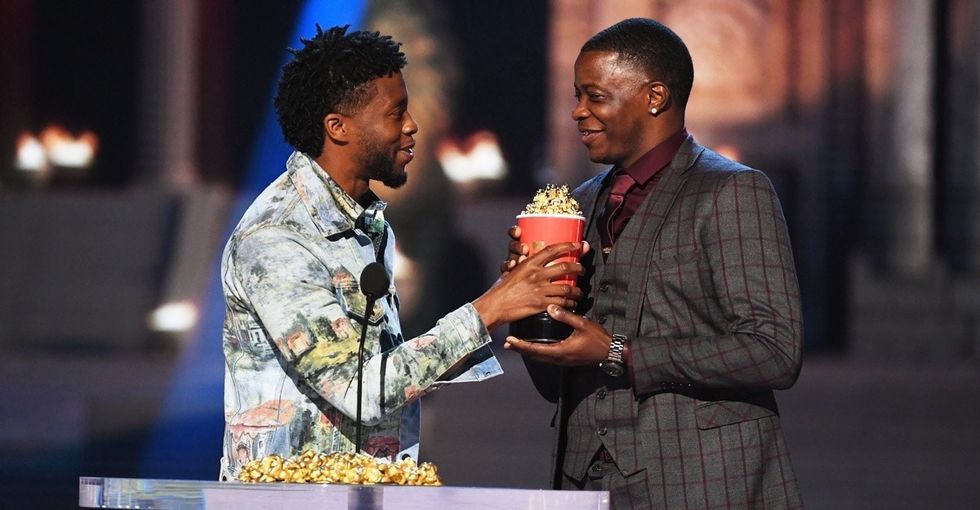 Chadwick Boseman won Best Hero at the MTV Movie and TV Awards for his performance in "Black Panther," but he gave it to somebody he thought was more deserving.

"Receiving an award for playing a superhero is amazing, but it's even greater to acknowledge the heroes that we have in real life," Boseman said before asking a man in the audience named James Shaw Jr. to stand up.

Shaw is the real-life hero who fought off a gunman inside an Antioch, Tennessee, Waffle House on April 22. Four people died during the shooting, but Shaw's quick thinking and unimaginable bravery saved the lives of others as he wrestled a rifle away from the gunman.

Boseman called Shaw up to the stage, telling him, "This is gonna live at your house," while handing him the Best Hero award he was just given. The crowd cheered, giving Shaw a standing ovation.

James Shaw Jr. is a reminder that you don't have to rule Wakanda to make a difference in this world.

Shaw didn't have super powers or some sort of specialized training before he took on the Waffle House shooter. He was just a 29-year-old father of a 4-year-old girl, an AT&T employee and electrician. He was an ordinary man who did something extraordinary. After that night, he became a hero.

"I remember I was like, 'Dang, I’m basically in a barrel. There is no place for me to go,'" Shaw told The Tennessean. "I distinctively remember thinking that he is going to have to work for this kill. I had a chance to stop him and thankfully I stopped him."

There's no way to know how any of us would react if we were to find ourselves in Shaw's position that April night, and hopefully we'll never have to. The capacity to be a hero, to change a life or change the world, exists in all of us. Ask yourself: "How am I going to unleash my inner hero, my inner James Shaw Jr. today?"

James Shaw, Jr. does the "Wakanda Forever" salute alongside Olivia Munn and Zazie Beetz during the MTV Movie and TV Awards. Photo by Kevin Winter/Getty Images for MTV.

Who knows the most about school? Students.

This article originally appeared on 05.22.15

This is not news: America does pretty badly when it goes up against other countries academically.

This is true even if we take it one state at a time—no single state, no matter how wealthy or small, matches the top scoring countries. And yet, the U.S. spends more per student than many other countries in the world.