The savvy plan two Puerto Ricans came up with to revitalize the island's economy. 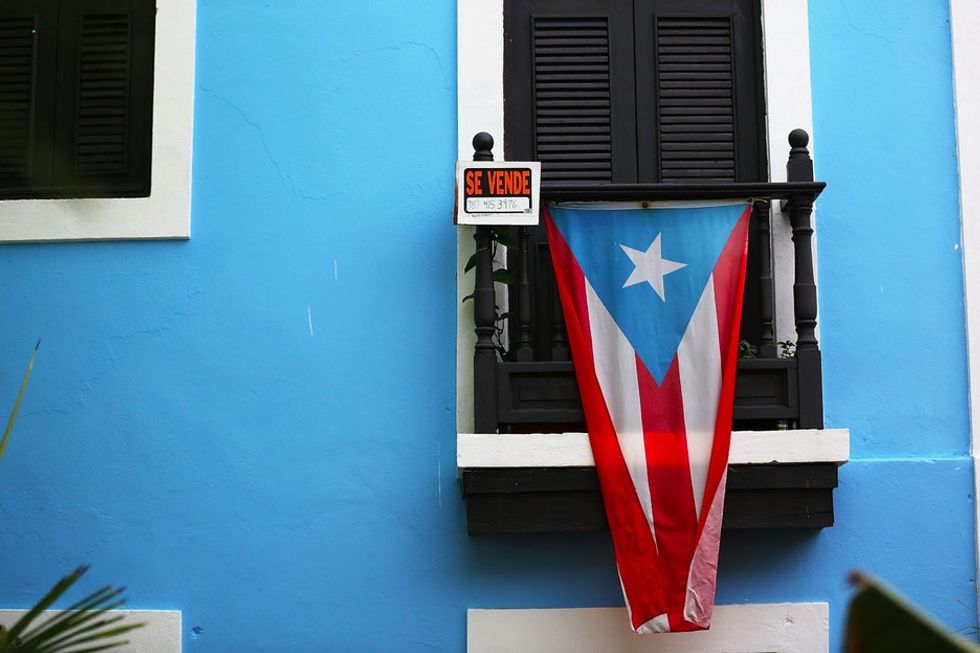 When Miguel Columna graduated high school in 2006, he followed a pathway that had become common for many of his peers in Puerto Rico: He packed up his bags and left the island.

Columna visiting Culebra, a small island off the eastern coast of Puerto Rico, in Dec. 2013. Photo used with permission.

The now-26-year-old Columna jetted off to Washington, D.C., to study economics and political science at American University. After that, he took a job with the Obama administration, working as a special assistant to the chairman of the Federal Trade Commission.

His story isn't that uncommon.

The ongoing economic crisis in Puerto Rico is a big reason why so many people are heading out.

Puerto Rico, one of five remaining U.S. territories, is bogged down by a whopping $72 billion in debt and hasn't been able to pay its bills. At this point, some experts say declaring bankruptcy is its best bet because that would allow the government to renegotiate the terms of its debts. But since Puerto Rico is a U.S. territory (sort of like a state, but not really), it can't declare bankruptcy without approval from Congress.

With the Puerto Rican economy in shambles and no promise of relief on the horizon, a net average of roughly 48,000 people per year left the island for the mainland between 2010 and 2013 — and the trend continues today.

Movers pack up a woman's apartment in July as she prepared to move from San Juan to Orlando, Florida. Photo by Joe Raedle/Getty Images.

But folks like Columna are finding a silver lining to the huge numbers of people leaving Puerto Rico behind.

While some see the mass exodus as brain drain — losing ambitious young people to places like New York and Miami — Columna, a transplant himself, envisions his scattered compatriots as a global network, capable of performing “brain circulation" that could bring knowledge, connections, and capital back to Puerto Rico.

His idea: Why not reach out to the millions of Puerto Ricans living outside the island to help promote economic growth back home?

Back in 2012, Columna joined forces with Isabel Rullán, another Puerto Rican working in the Obama administration, to form ConPRmetidos, a think tank that uses public-private partnerships to spark economic development on the island. This July, they launched a new project, the Puerto Rico Global Initiative, focused on connecting Puerto Ricans at home and on the U.S. mainland.

They see the millions of Puerto Rican transplants and their children as potential ambassadors to attract investment in the island.

“We're leveraging the fact that we have this sales force that is untapped," Columna told Upworthy. “It's all these Puerto Ricans who are abroad, who are in decision-making positions."

Of course, even if investments like these succeed, they alone won't solve the island's deep financial woes. For that reason, Columna also wants Congress to allow Puerto Rico to declare bankruptcy.

In the meantime, the group is continuing its more practical work: building connections with Puerto Ricans living abroad who can help bring investments back to their home, in areas such as real estate, energy, and tourism.

Bianca Cabán, a 27-year-old entrepreneur, investor, and philanthropist based in Manhattan, is one of the people who received a boost from Puerto Rico Global.

Cabán (right) with Melissa Mark-Viverito, the speaker of the New York City Council, at a July 2014 event in the Bronx. Photo used with permission.

Both Cabán and her parents were born and raised in New York City, but she still has relatives living in Puerto Rico and would like to see the economy rebound. With a degree in economics and political science from Harvard and experience working for Credit Suisse and Atlas Merchant Capital — an investment firm focusing on emerging global markets — she has the perfect background for a project like this.

In late 2014, she learned about a pilot version of Puerto Rico Global and its mission to connect professionals on the island and around the world. She became an ambassador for the organization but also says they've been “incredibly supportive" when it comes to executing her ideas.

At her uncle's house in Rincón, Puerto Rico, during a December 2013 visit. Photo used with permission.

Cabán says she was spurred on by the advice of former Harvard President Lawrence Summers, who also served as a senior adviser for Atlas. She remembers hearing him say to “never waste a crisis," a message that she took to heart. “I saw the opportunity to do well and do good," she says.

So far, she's pitched investors on several business deals in Puerto Rico around real estate and the energy sector, as well as entertainment and medical cannabis. She heads to the island every five to six weeks — staying with friends or in hotels — but would like to establish a business office, if not a home, in San Juan.

Cabán says working with Puerto Rico Global has been "invaluable." Although she grew up visiting the island once or twice a year, she didn't have deep contacts in government or business before now.

“They really helped me get plugged in to that whole system and helped introduce me to the most important people that I needed to know," she says.