The people of North Carolina are standing up to a new anti-LGBT law in a big way.

The response to North Carolina's new anti-LGBT law should give us hope. 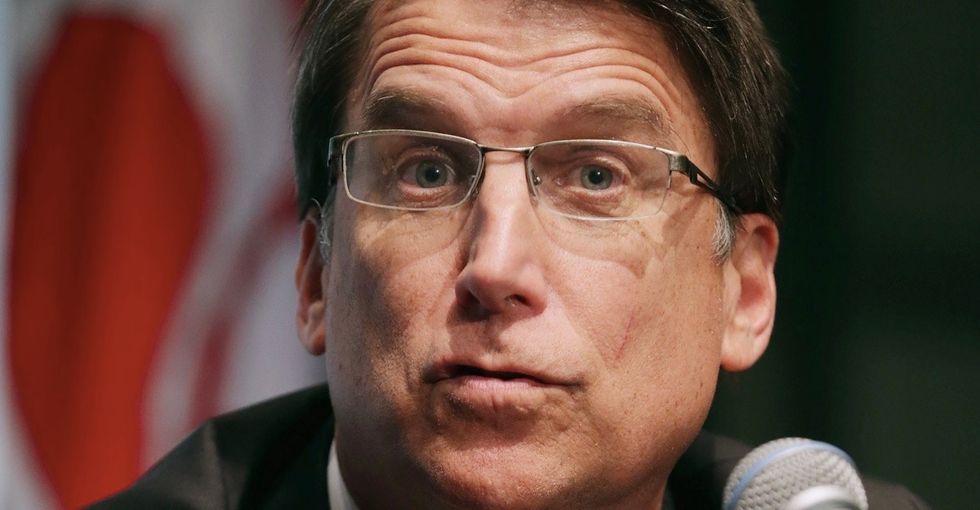 The ordinance simply said that Charlotte businesses wouldn't be allowed to discriminate against people because of their sexual orientation or gender identity. It was rolled into the city's existing nondiscrimination ordinance that protect people on the basis of race, age, religion, and gender.

Not exactly the most controversial thing in the world, right? Well...

Yesterday, the state legislature passed a bill that was signed into law by Governor Pat McCrory late last night, which nullified all city-level nondiscrimination ordinances across the state.

It also stated that in schools and government buildings, trans people would be forced to use bathrooms based on what their birth certificate (something that's extraordinarily hard to change) says. Oh, and it also wiped out city-level minimum wage laws. Ah, and it removed city-level protections on the basis of race and gender too.

In other words, it's a terrible, horrible, no good, very bad law.

The key argument in repealing the bill was that transgender women posed a risk to cisgender (non-trans) women in restrooms.

This despite the fact that in the numerous states and cities that have enacted inclusive nondiscrimination ordinances, no trans woman has ever used the law as a means to attack another woman. On the other hand, 70% of trans people surveyed have been denied access, harassed, or assaulted while trying to use public restrooms.

But the concern for women's safety is what Governor McCrory says influenced his decision to sign the hastily-passed bill.

It's an odd reason for the governor to cite, given the fact that Charlotte's ordinance didn't allow for "men" to use women's locker rooms anyway.

As their legislators worked to enact the most anti-LGBT law in the country, North Carolinians watched on, horrified. They began rallying around the hashtag #WeAreNotThis.

Some tweets focused on the irony of the lack of a democratic process in passing the bill.

Others cheered on legislators who spoke out against it.

Many others decried the legislature's use of "women's safety" as cover for a law that actually makes women as a whole less safe.

Some looked at the state's history (and the country's history) with legislating bathroom use.

And others simply expressed the disappointment of watching their state slide backward in time.

What's important to remember is that the actions of the state's lawmakers don't necessarily mean that the people of North Carolina are, as a whole, in agreement with them.

Gov. McCrory (who is running for reelection this November) and the state legislature have taken steps to undermine the rights of many North Carolina residents.

From here, it's a matter of what happens next. For those who believe the legislature was in the wrong, they can help work to elect replacements. For those who want to change the law, they can join efforts to challenge it in court.

The passage of a single bad law can be the beginning of necessary change; it doesn't need to be the end.