We should listen to what these amazing kids have to say. 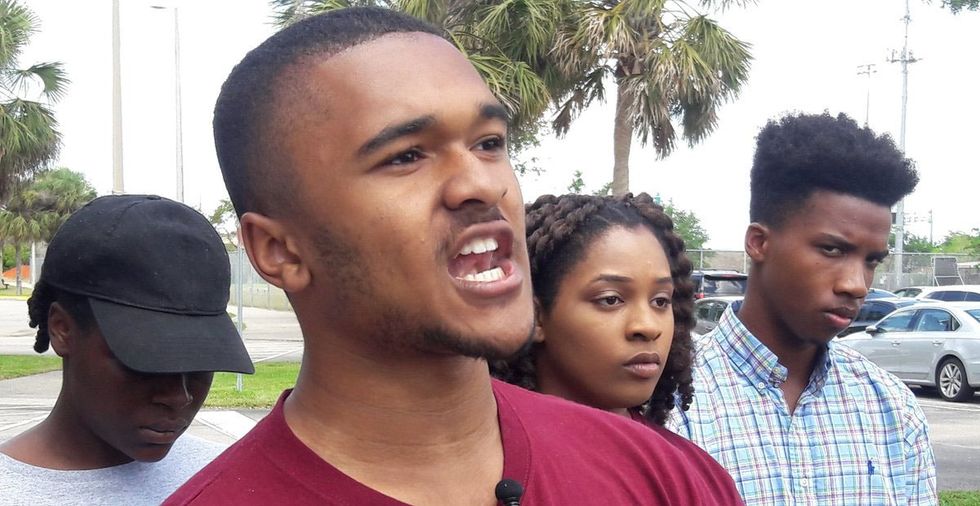 The well-known Parkland activists have done remarkable work, but there is another group of students who aren’t being as heard.

On March 28, 2018, black students at Marjory Stoneman Douglas High School held a press conference to discuss their frustration with being left out of the conversations about gun violence and school safety.

Making up 11% of the school's population, black students are in a tough spot. Having gone through the same traumatic experience as the other students at the school, black students should also be at the forefront of these conversations around gun violence in America. Instead, they’ve largely been invisible on a national scale, and their white peers have noticed.

When asked what the biggest mistake in media coverage of Parkland has been, David Hogg, one of the more visible activists, told media outlet Axios, "Not giving black students a voice," noting that a significant portion of his school comprises black students. "But the way we’re covered doesn’t reflect that. It's disgusting," he added.

At the press conference, only about 10 media outlets covered the students conference, most of which were local.

In addition to asking for more inclusive media coverage, many students brought up a pressing concern at the high school that's arisen since the mass shooting. Black students take issue with the increase of law enforcement at the school — and they have good reason to.

Black students across the nation are disproportionately affected by over-policing in schools.

Recently, many districts across the nation have made large strides to reduce the police presence. With a larger in-school police force, black students are worried about being racially profiled and unnecessarily disciplined.

"It’s bad enough we have to return with clear backpacks," 17-year-old Parkland student Kai Koerber said. "Should we also return with our hands up?"

Kai says while some might feel comfort to have more police officers at Marjorie Stoneman Douglas, he does not. He s… https://t.co/8Z3PbsdHi6
— Nadege Green (@Nadege Green)1522277114.0

Increasing police staffing could be damning for an already vulnerable population. As student Tyah Amoy discussed, law enforcement hasn't been kind to black students or communities. As outrage continues to mount after the brutal shooting of Stephon Clark by police officers in California, black students are adamant that police violence and brutality be protested and addressed in the same way as other forms of gun violence.

"Black and brown men and women are disproportionately killed and targeted by law enforcement," Amoy said. "These are not facts I can live with comfortably."

The Parkland students are doing incredible work in the face of constant social media attacks, slandering from the NRA, and attacks from adults who are seemingly hell-bent on arguing with children.

But, the students must remember that activism needs to include the voices of everyone involved. When making calls for anti-violence policies, it’s imperative to make sure those policies will actually reduce violence for everyone.

Advocating for the safety of all children can be complicated, but there are plenty of resources to make it easier.

Numerous black organizations have laid the groundwork to create policies that benefit children from different schools, backgrounds, and communities. Organizations like Campaign Zero, The Movement for Black Lives, and the Black Youth Project offer ideas and ideas for anti-violence policies.

The Parkland students are truly showing us just how much power youth voices can have in our government and society. We do ourselves a greater justice when we make sure all youth voices are apart of those conversations.