The brilliant way this woman brought the Women's March to the disabled community.

'People who are disabled are here and we can help in a million ways, especially with Internet access. Do not write us off as less-than or incapable.' 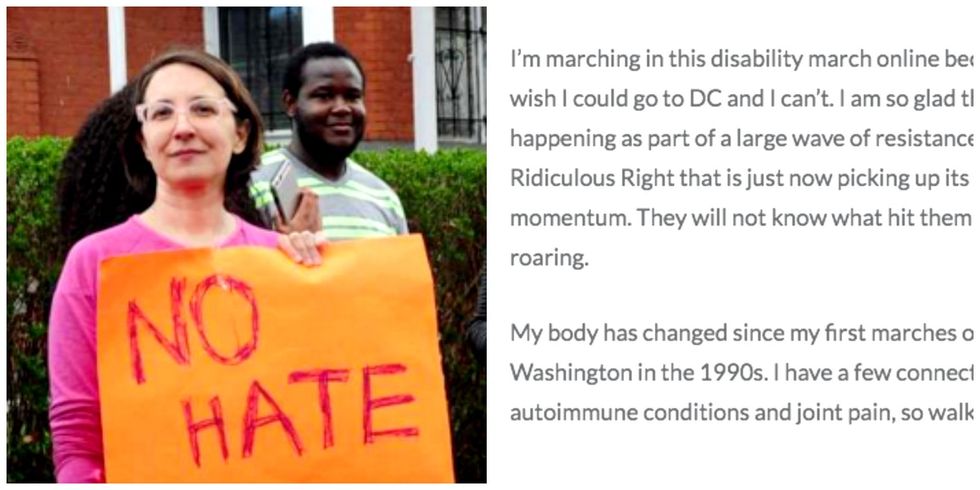 Sonya Huber, a professor at Fairfield University, very much wanted to attend the Women's March in Washington, D.C., on January 21. Her autoimmune diseases, however, posed a problem.

While she can walk, the diseases take a toll on her energy, and she fears exhaustion after extensive mobility would overtake her. And she's not alone. 22% of American adults are living with a disability, and 13% of adults have trouble with mobility.

Even though a record-shattering number of people with a disability are expected to attend the Women's March (perhaps the most in United States history), that shouldn't prevent the countless others who want to show their support, but physically can't make it happen.

So Huber, along with a few like-minded individuals, decided to create a virtual march for activists for whom the Women's March proved inaccessible.

"I think that especially with big marches, the logistics of getting in and out of a city can be prohibitive," writes Huber in an email, although she believes the Women's March has been very active and responsive in terms of marchers' needs.

Their mission is the same as the Women's March, part of which states "in the spirit of democracy and honoring the champions of human rights, dignity, and justice who have come before us, we join in diversity to show our presence in numbers too great to ignore."

Participants are signing up on the Disability March website by entering their names, a photo, and a short explanation of why they're marching.

When she was younger and had more mobility, Huber admits she didn't always give the disabled community the consideration it deserves. Of course that changed when she herself became disabled.

"I struggled for a long time with putting myself in that category because social stigma and fear makes that category seem something separate and very hard," Huber wrote in her Disability March bio. "Hello, ableism and internalized ableism."

Today, she knows all too well how much that stigma negatively affects the disabled community and has thus made it her mission to turn it around.

"People who are disabled are here and we can help in a million ways, especially with Internet access," wrote Huber. "Do not write us off as less-than or incapable."

The response they've received from the disabled community has been overwhelming, which proves people were indeed looking for an accessible activist outlet.

Participants have been asked to tweet messages of solidarity using the hashtag #DisabilityMarch and direct tweets at elected officials explaining why better health care matters to them. Their goal is to make themselves as visible as possible — virtually speaking.

#pussyhat firmly on head and ready to wear for the Women's March on Saturday. Crossing fingers and toes that I will feel well enough to attend; if not, I will participate in the online #disability march with my fellow #spoonies. #womensmarch #disabilitymarch #wmw #sistersfromthenorth #wmwcanada #proudfeminist #feminist #womensrights #humanrights

The Disability March is a reminder to allies as well as elected officials that the disabled community has a voice and deserves a space in protest movements.

In the next four years, there will likely be many more calls to action and moments of protest, and accessibility should be a key consideration of those organizing.

As is evident by the Disability March, and the many other disabled activist movements currently taking shape around the country, people living with disabilities are just as capable of fighting for their rights as anyone else. Just because some of them may need to do it from home doesn't mean their action will be any less effective or should be taken any less seriously.

Sometimes, in the rush to get a movement organized, the disabled community gets left out or tacked on at the end as an afterthought. At a time when their rights may be among those most threatened, they should be at the center of activist agendas, not the outskirts.

As the conclusion of the Women's March mission states, "We stand together, recognizing that defending the most marginalized among us is defending all of us."