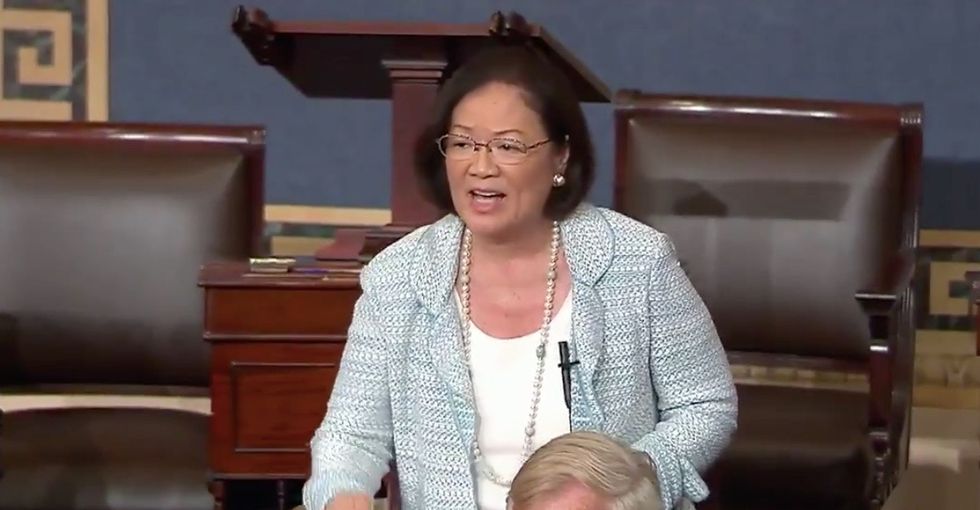 "I am probably the only senator here who was not born in a hospital," Sen. Mazie Hirono said.

Hirono (D-Hawaii) was on the floor of the Senate last night to vote against the last-minute "skinny repeal" of the Affordable Care Act. While there, she gave an impassioned speech about the importance of health care.

She started with her own history, occasionally pausing to collect herself as she recounted growing up in rural Japan, losing her sister to pneumonia at a very young age, and watching her working-class mom struggle with illness in Hawaii. You can hear the emotion in her voice.

Her family's story is moving, but Hirono's most important point came when she opened up about how people reacted to her own health crisis.

"I am fighting kidney cancer," Hirono said. She announced her diagnosis in May and, like Sen. John McCain (R-Ariz.), who cast one of the deciding votes against repeal, returned from recovering post-surgery to be part of the historic vote last night.

But Hirono wondered where all that compassion went last night. The Congressional Budget Office estimated that the "skinny repeal" plan would have booted 16 million people off their insurance within 10 years and increased premiums by 20%.

The state of health care in this country leaves a lot to be desired. But as Hirono pointed out, health care reform needs to be built in the light of day, not rushed through in the dark hours of the night.

Though the "skinny repeal" plan failed last night, there are likely to be more debates and votes in the future. At no point should we forget that our first priority should be compassion.

"We are better than that," said Hirono.

Watch her full impassioned speech below: