The AP Stylebook just changed the meaning of 'global warming' with one amazing edit. 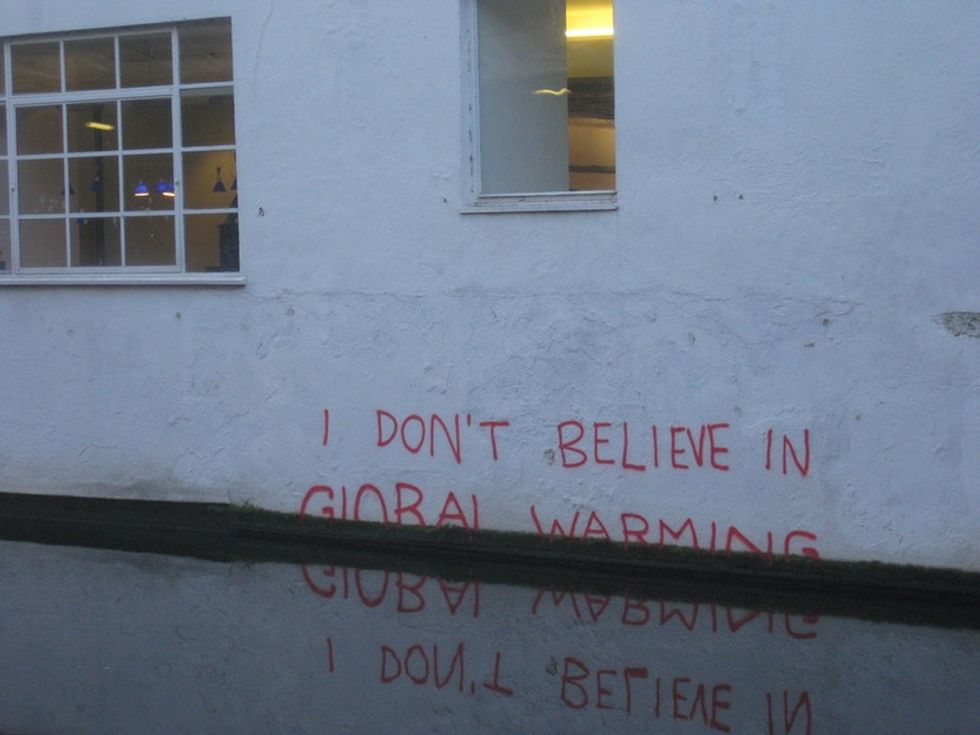 The AP Stylebook is one of the go-to sources for the rules of American English.

Published annually by the nonprofit Associated Press, the AP Stylebook is often used by journalists and publishers to standardize things like grammar, punctuation, and abbreviations as well as appropriate word usage.

For example, if you're not sure whether "civil rights movement" should be capitalized or if it's OK to abbreviate "BLT" when the sandwich gets mentioned, the AP Stylebook has you covered.

A page from a previous edition of the AP Stylebook. (It's also why I'm forced to use "OK" and not "okay," grrrr.) Photo by George Kelly/Flickr.

The Stylebook gets updated each year to reflect the latest changes in language.

This year alone, they added more than 300 new or revised entries, ranging from amaretto to NCAA sports to the correct way to talk about suicide.

But there was one change in particular that really got our attention.

Here's how the AP described the reason for this change:

"Scientists who consider themselves real skeptics — who debunk mysticism, ESP and other pseudoscience, such as those who are part of the Center for Skeptical Inquiry — complain that non-scientists who reject mainstream climate science have usurped the phrase skeptic. They say they aren't skeptics because 'proper skepticism promotes scientific inquiry, critical investigation and the use of reason in examining controversial and extraordinary claims.'" — AP staff memo from Stylebook editors Sally Jacobsen, Dave Minthorn, and Paula Froke

You read that right — the willful refusal of "those who reject mainstream climate science" to acknowledge the overwhelming evidence in the world is giving actual skeptics a bad name.

According to the Merriam-Webster Dictionary, "Irony" is "a situation that is strange or funny because things happen in a way that seems to be the opposite of what you expected." This image is not ironic. Photo by Matt Brown/Flickr.

Instead, the new AP Stylebook recommends the use of "climate change doubters" or "those who reject mainstream climate science." They do not, however, forbid the use of other pejorative insults to describe the willful ignorance of this vocal minority.

They've also officially equated "climate change" and "global warming," which isn't the hugest deal but is at least enough to shut down the haters who say things like, "But I was cold this one time last year so climate change can't be real!"

But AP's language rules need to stay objective, so they made a change on the other side as well.

Despite the overwhelming evidence, "those who reject mainstream climate science" continue to insist that our dangerously changing climate is not actually changing or else that the rapidly melting polar ice caps and rising sea levels are totally no big deal and just something that happens sometimes.

You know. Just like it did with the dinosaurs.

Best case scenario: Our fossilized remains are discovered and displayed by the next dominant species on the planet in 65 million years. And that's reason enough for inaction? Let's think about that. Photo by Andrew McMillan.

Of course, it would be unfair if the AP were to consider only the perspective of people who accept the near-unanimous scientific consensus. They had to factor the feelings of "those who reject mainstream climate science" as well:

"Those who reject climate science say the phrase denier has the pejorative ring of Holocaust denier so The Associated Press prefers 'climate change doubter' or 'someone who rejects mainstream science.'"

(I might be biased, but I think that if you're more concerned about being associated with Holocaust deniers than you are with the fact that 97% of climate scientists agree that we are headed for certain doom, maybe you need to look at your life choices?)

Basically the AP has officially and objectively updated our language to reflect what we already know: Climate change is real, and it is serious.

Language is the way that we communicate shared meaning, and it's always evolving. Simply put, if enough people agree on the meaning of the thing, then, well, that's what it means. (That's how "literally" can literally come to mean its own antonym or why we forget that even Shakespeare said "aks" instead of "ask.")

But words alone are not enough to undo the damage from our changing climate. You can do that by signing this petition ahead of the upcoming Paris climate talks — where all the world's leaders are coming together to solve the crisis.

And if that's not enough for "those who reject mainstream climate science," then I don't know what is.

Every day, I wake up feeling like Peeta at the end of "The Hunger Games" series asking Katniss what's real and what's not real.

The first thing I do is run through a series of thoughts to orient myself to this bizarre reality we're currently in: "What day is it today? Umm...Tuesday, I think. Who is president of the United States? Donald Trump. Wait, is that right? That can't be right....No, yes, that's right. Wow. Are we still in the middle of a global pandemic that has killed 200,000+ Americans in six months? Yes. Are people still acting like it's a hoax? Apparently so. Is there still a ridiculous number of people who believe that an elite cabal of Satan-worshipping pedophiles is secretly running the world and trafficking children to harvest fear hormones from their blood, and that Donald Trump is going to save us all from it? Yup."

Then I lie there in dumbfounded disbelief before semi-rallying: "Okay, here we go."

It's not really okay, though. How any of us are expected to be able to function in this reality is beyond me. When we've gone beyond merely having different perspectives on issues and instead are living in completely different versions of reality, I can't figure out how to feel okay. Or, to be more accurate, when some of us are living in objective reality and a not-insignificant-enough number of us are living in a completely made-up land of alternative facts and perpetual gaslighting, it's hard not to feel like I'm the one losing my grip.