The airplane graveyard that 3 families call home is the subject of a stunning photo series.

From the skies to the ground, these airplanes continue to serve a purpose. 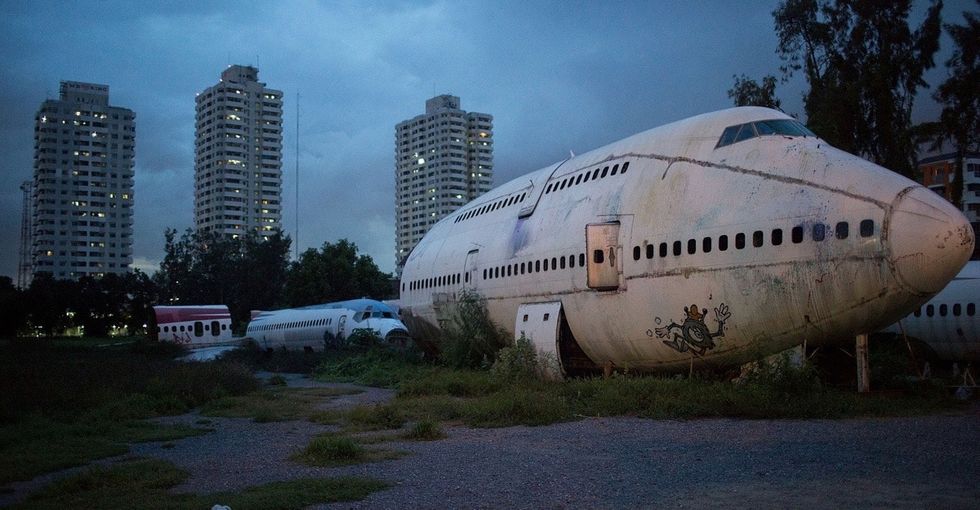 This article originally appeared on 09.18.15

What happens to airplanes after they're no longer fit to roam the skies?

An abandoned 747 rests in a Bangkok lot. Photo by Taylor Weidman/Getty Images.

Decommissioned planes are often stripped and sold for parts, with the remains finding a new home in what is sometimes referred to as an "airplane boneyard" or "graveyard." Around the world, these graveyards exist; they're made up of large, empty lots and tons of scrap metal.

In the city's Ramkhamhaeng neighborhood sits a lot peppered with parts from jets and commercial liners. What's most interesting, however, aren't the planes, but rather the people who live among the wreckage.

This man exits through the back of one of the plane shells.

This is the interior of what was a Boeing 747.

Life in the graveyard is about as bare-bones as it gets.

The three families living in the lot seem to get by with little more than the shelter created by the hull of a 747, mats, and makeshift curtains. For money, several collect recycling, and as the International Business Times reports, "they occasionally supplement their income by charging tourists and photographers 100 Baht (about £1.80 or $2.77) to look around their homes."

This woman sits underneath a photo of Thailand's king.

Living on just a few dollars a day, the planes contain comfort that wouldn't be found elsewhere.

Weidman's photos shine a light on the luxuries we so often take for granted in life; namely, the ability to travel.

Seeing vehicles once used to jet people around the world for business, pleasure, and everything in between used in a much more fundamental way — as the basic shelters needed for survival — is its own form of forced perspective. It also highlights the creativity of those living in the lot; being able to transform airplanes into places to call home is no small feat.

The three families have some small comforts, like sheets, clothes, and the occasional small appliance.

This man rests in one of the partitioned rooms, listening to the radio.

Most of all, Weidman's photos tell a story about the importance of empathy.

The families in the Ramkhamhaeng lot are human, just like you and me. Like all of us, they're doing their best to survive.

A lot resident collects recycling outside one of the residences.

This young boy plays outside one of the planes, hiding from his grandmother.

This stunning collection of photos brings just a brief glimpse of what it's like to step into their shoes; something we should all strive to do more often.

This man is bringing buckets of water back to his family on a hot day.

'Seeing a grown man get so excited about Capri Sun is extra wholesome.'

"Dee" the delivery guy stoked to get some Doritos.

Recently, one of the Barnetts’ delivery guys, a joyous fellow that we believe is known as Dee, went viral on TikTok because of his positive reaction to receiving some snacks during his deliveries. The snacks are tasty, no doubt. But it’s also wonderful to feel appreciated. After Toni posted the video, it received more than 100,000 views.

A heartening response to his horrifying interviews.

Kanye West (who has legally changed his name to Ye) has been making headlines—again—not only for his bizarre public behavior, but for blatantly antisemitic remarks he made in recent interviews.

There's no question that Ye's comments praising Hitler and Nazis and denying that 6 million Jews were killed in the Holocaust are hurtful and dangerous. There's no question that bad actors are using Ye's antisemitic comments to push their white nationalist agenda. The question is whether Ye fans would allow their admiration of his musical talents—or whatever else they like about him—to overshadow the fact that he is now regularly spewing pro-Nazi rhetoric to millions of people.

In at least one corner of the internet, fans are responding in what may be the most effective and meaningful way possible—by countering Ye's commentary with a deluge of Holocaust education and remembrance.

Two souls connecting over the loss of their fathers. (Phew, grab a tissue for this one, folks.)

There was an emotional exchange on TikTok between two people who lost their fathers to cancer. One was actor Mandy Patinkin, the other was TikTok user Amanda Webb.

Patinkin currently stars on "The Good Fight" but one of his most famous roles is Inigo Montoya in the 1987 classic "The Princess Bride." In the film, Montoya is a swordsman who is obsessed with confronting a six-fingered man who killed his father.

Webb recently lost her father Dan to mantle cell lymphoma. She had heard a rumor that Patinkin used his father's death from cancer as motivation in a pivotal scene where he confronts the six-fingered Count Rugen (Christopher Guest) in a duel.

Keep ReadingShow less
movies
Get stories worth sharing delivered to your inbox
By signing up you agree to Upworthy's privacy policy.
Trending Stories
Culture