The absolutely wild story from the civil rights movement you didn't hear in history class. 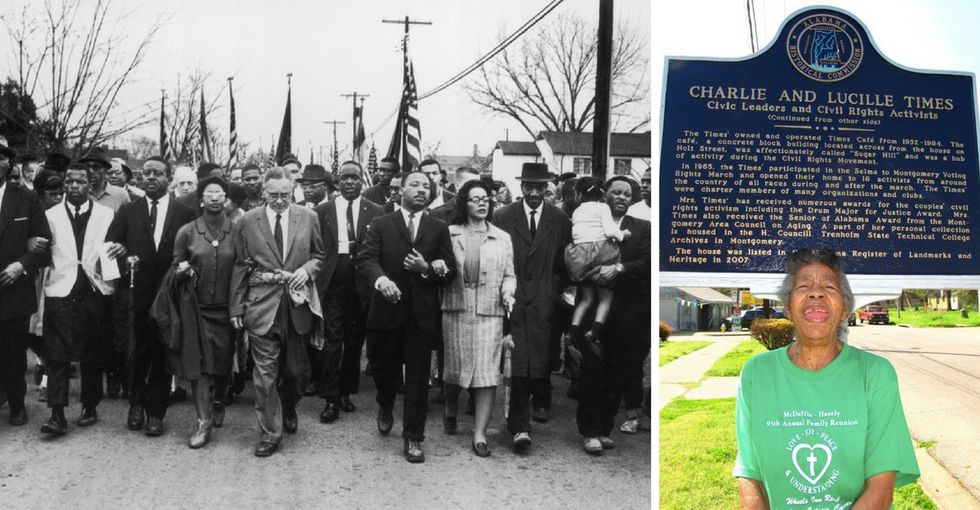 Lucille Times just wanted to get some dry cleaning done. She ended up a major part of forgotten United States history.

Countless people stood up, marched, and resisted during the civil rights movement. This is the story of one such woman so fed up with the BS that decided to do something about.

(And the end is absolutely bonkers!)

Lucille Times, a 33-year-old black woman living in Montgomery, Alabama, drove her Buick LeSabre to the dry cleaners. On the way, a Montgomery municipal bus driver attempted to run her car off the road.

Not once. Not twice. But three separate times.

“The bus driver got angry and tried to run me off the road and into a ditch,” Times told Troy Today.

GIF from "The Daily Show."

After the third attempt, Times pulled over.

She hoped the bus would pass and she could carry on. Instead, the bus driver pulled up behind her and got out. Times got out of her car too.

The driver and Times had a heated altercation, exchanging expletives. She says the confrontation even got physical at one point, so the bus driver called the police. When they arrived on the scene, the Montgomery Police were of little help to Times. They didn't arrest her, but after nearly killing her, the bus driver went unpunished.

Fed up, Times went to the president of her NAACP unit. She wanted to start a bus boycott.

The president, E.D. Nixon, was a well-known union leader, strategist, and activist. He already had an idea for a bus boycott in the works and was looking for the perfect sympathetic plaintiff to be the face of the movement.

As empathetic to the cause as he was, he suggested Times wait to begin the boycott until after Thanksgiving so the city would lose out on fares from holiday shoppers. But that timeline didn’t suit Times. A veteran organizer herself, Times decided to go it alone. She started her boycott the next day.

Times got in her car and drove around the city. When she saw black people at the bus stop, she offered to pick them up and take them to their destination.

She was one woman in a Buick, so the impact was relatively small, but her purpose and passion were undeniable. Soon, a few other friends and neighbors with cars joined in to help. Their boycott went on for nearly six months.

GIF from "Laugh at My Pain."

Cut to Dec. 1, 1955: E.D. Nixon had finally found the perfect plaintiff for a potential bus boycott.

After Thanksgiving, as planned, she sat down in the front of a Montgomery bus and refused to move. Parks' refusal and subsequent arrest triggered the official launch of the Montgomery Bus Boycott. E.D. Nixon got on the phone to find ministers and senior leaders in the church to help lead the effort. One person he called was Martin Luther King Jr. The rest of that story is 381 days of courage, grit, and U.S. history.

A man looking at a photograph of Rosa Parks at the Rosa Parks Museum in Montgomery. Photo by Justin Sullivan/Getty Images.

The driver of Rosa Parks’ bus was James Blake — the very same bus driver who tried to run Lucille Times off the road less than six months prior.

In your face, bigots! GIF via Nickelodeon.

After the official launch of the Montgomery Bus Boycott, Times continued to give rides to people in need.

She stepped up to serve in several capacities throughout the civil rights movement, providing space for organizers at the café she owned with her husband, as well as opening their home to NAACP meetings. She even marched the entire route from Selma to Montgomery, hosting 18 other marchers of all backgrounds at her home.

But while Rosa Parks and Claudette Colvin made history books, Lucille Times is rarely mentioned.

However, the state of Alabama listed the Times’ home in the Alabama Register of Landmarks and Heritage in 2007, and a large marker stands there today. Lucille Times is still alive and in her mid-90s.

Not too shabby for a woman who just wanted to pick up her dry cleaning.

Shoutout to Brittany Luse and Eric Eddings at The Nod podcast for telling Lucille's story on their show and bringing it to my attention.