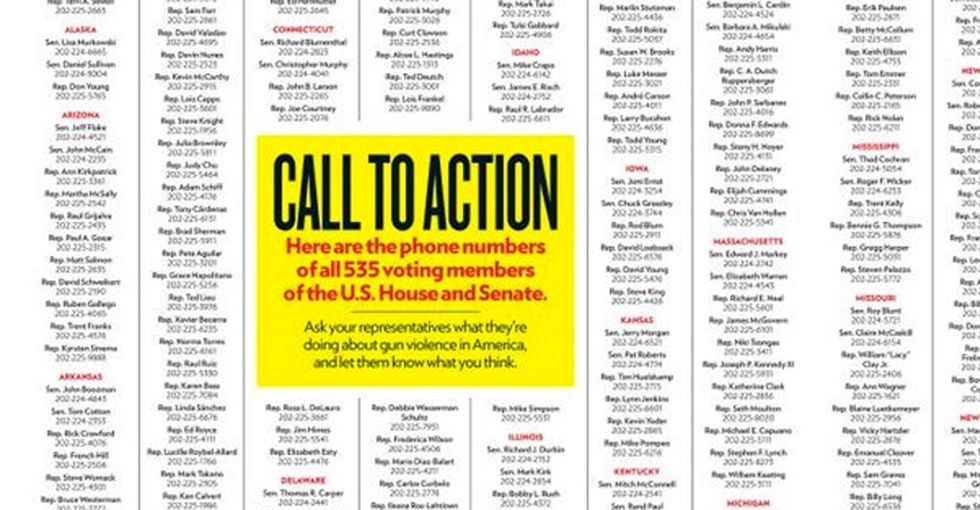 You might think of People magazine as a celebrity gossip rag, but in a recent letter from the editor, Editorial Director Jess Cagle wrote about something decidedly more serious.

As it often does in the wake of national tragedies, People covered the awful story about the Umpqua Community College massacre.

But the difference was the call to action contained in the editor's letter, which was also published online.

Cagle writes about the heartbreak of once again having to reach out to victims' family members after a mass shooting so that the magazine could pay tribute to them. Cagle says that there are "no easy answers" to the questions, "How could it happen again? What are we doing about gun violence in America?"

"But this much we know," he writes. "As a country we clearly aren't doing enough, and our elected officials' conversations about solutions usually end in political spin."

Cagle acknowledges: "I think mass shootings when I'm on a train, and when the lights go down in a movie theater, and when I see children in a classroom."

And then he gets to the point:

"We need to know that our representatives in Washington, D.C., are looking for solutions and not giving up, and they need to know if we agree or disagree with their strategies. Below, we've provided phone numbers, email addresses (provided by the Sunlight Foundation's OpenCongress project) and Twitter handles (when available) for all 535 voting members of the House and Senate. Let's make sure they know that from now on, "routine" responses just won't cut it."

He calls for readers to contact their senators and representatives and "make their voices heard." Providing the contact info of every member of Congress makes it much easier for readers to do.

The thing about gun violence is that we make it a political issue — and nothing ever changes.

In his video, Cagle says, "one thing is very, very clear: as a country, we are not doing enough about gun violence." He references the Center for Disease Control's statement that firearm injuries and deaths are a public health concern. Yet despite it being a public health concern, it's one we continue to ignore in the face of mass shootings and everyday gun violence so common it doesn't even make national news.

Despite the CDC's concern about gun violence, Congress has worked hard to ensure the government agency doesn't actually conduct any research into the best way to deal with it. Back in 1996, "Congress imposed major restrictions on what kind of gun violence research the CDC can do. And the agency has interpreted the restrictions to stop almost all gun-related research," explains Vox.

The ban —"None of the funds made available for injury prevention and control at the Centers for Disease Control and Prevention may be used to advocate or promote gun control." — was just recently extended by Congress.

If we want to see change, we need more information about what's going to actually help reduce gun violence.

Because doing nothing sure isn't working.

It makes sense that a public agency whose stated mission is "to protect America from health, safety and security threats, both foreign and in the U.S." would do that research. And yet it cannot, and Congress is trying to keep it that way.

I never thought I'd say this, but we should take People magazine's advice. We need to reach out to our congressional representatives.

It's pretty cool that a magazine like People is encouraging Americans to take action. According to Statista, People reached about 79 million readers in the United States this year. That's a big audience, and it includes readers who might just do something, which would be great. How many more mass shootings are we willing to tolerate?