Tammy Duckworth’s baby just made history. And senators are loving it. 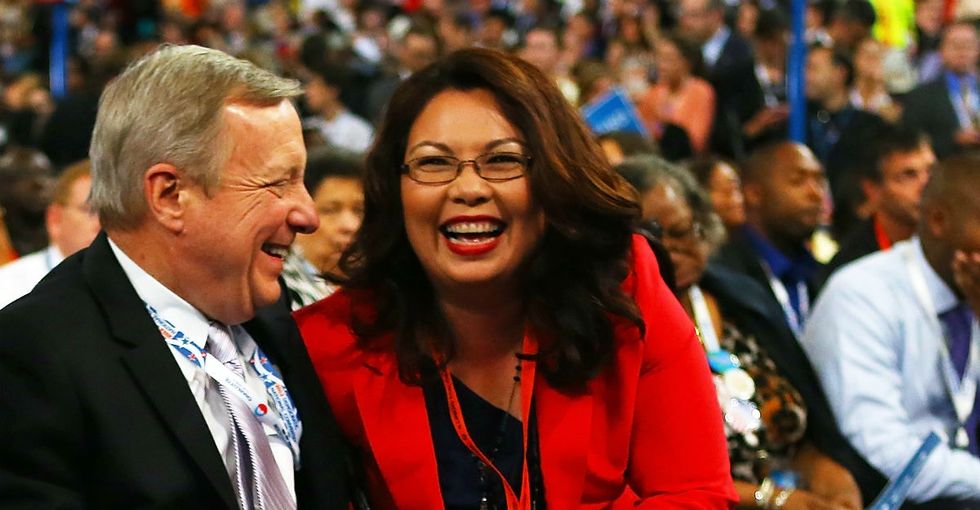 In doing so, the Democrat from Illinois became the first U.S. senator to give birth while serving in office.

10 days after giving birth, Duckworth made history again by bringing her baby onto the Senate floor.

"I made sure she has a jacket so she doesn’t violate the Senate floor dress code (which requires blazers)," Duckworth wrote on Twitter. "I’m not sure what the policy is on duckling onesies, but I think we’re ready."

Many senators were giddy to meet the newest member of the Duckworth family.

And others online were excited about the news and congratulated Duckworth, as well — not just for leading by example as a working parent, but also as a disabled women of color who uses a wheelchair.

"People see that Senator Duckworth is a war veteran and a woman holding elected office," one woman wrote on Twitter. "I see a disabled mother who is holding one of the highest government positions. She is the answer that, YES, disabled women CAN do it all."

And they can do it all holding their newborns, too.

The absurd thing is, just a few days ago, it would have been illegal for Duckworth to bring her child onto the Senate floor. But the new mom and U.S. Army veteran put an end to the archaic rule that would have stopped baby Maile from entering the upper chamber.

A few days ago, Duckworth submitted a resolution that would do away with a decree that barred children under the age of 1 from being on the Senate floor.

As a new mom, the rule was a major — and entirely unnecessary — barrier preventing Duckworth from balancing being an attentive parent with her day job. It's a predicament I'd guess, oh... just about every working parent has found themselves in at some point.

As reported by HuffPost, the resolution first needed to get through the Senate Rules Committee before getting approved by the upper chamber. And although some older male senators (*cough* shocking) seemed concerned that babies might disrupt "Senate decorum" — "What if there are ten babies on the floor of the Senate?" Utah Sen. Orrin Hatch had asked — Duckworth's proposition passed both hurdles relatively seamlessly.

Below, you can watch history being made by Duckworth and baby Maile (story continues afterward).

You'll see a bunch of senators — including Amy Klobuchar, Jeff Flake, Chuck Schumer, Claire McCaskill, and Mitch McConnell(!) — wander over to get a peak of baby Maile and say hello.

This is a big moment — not just for Duckworth and her family, but for working parents everywhere.

"By ensuring that no senator will be prevented from performing their constitutional responsibilities simply because they have a young child, the Senate is leading by example [and] sending the important message that working parents everywhere deserve family-friendly workplace policies."

Let's hope her colleagues are listening, because the U.S. is among the worst developed countries for new parents.

Our federal government requires no paid maternity or paternity leave, unlike almost every other wealthy nation on earth. And many other countries — like Sweden, France, and New Zealand — have enviable policies, like generous tax credit laws for families with young kids, as well as affordable, regulated day care facilities that make paying for childcare much more manageable for working parents, according to The New Republic.

If the U.S. Senate can change its rules to make the upper chamber more accommodating for its members, it should start doing the same for the rest of country, too.