Surf's up, turtle dudes! The sea turtle population is making a comeback. 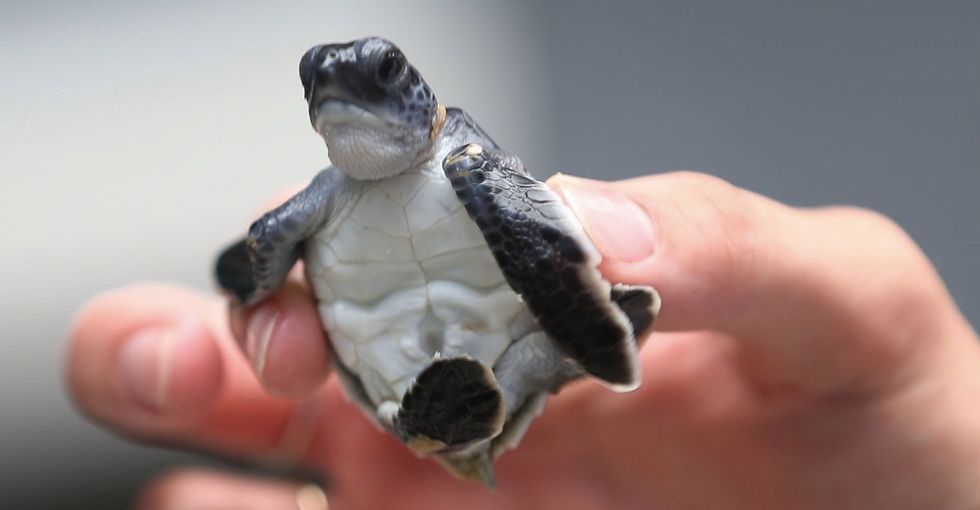 One of the most heart-pounding moments of the BBC's Planet Earth series has to be the baby sea turtles.

In the last episode of the show's second series, viewers watched cute baby sea turtles emerge from their nests in the sand. Then, our hearts collectively dropped as Sir David Attenborough's voiceover cut in to inform us that the tiny turtles, confused by nearby city lights, were headed the wrong way — straight into traffic.

Why must you play with our hearts, Mr. Attenborough? GIF from "Planet Earth II"/BBC.

It's a harrowing scene. The series didn't show how it ended for the babies, but after viewer outcry, the BBC confirmed via Twitter that — in defiance of normal standards — the filmmakers intervened to help direct the turtles back to the sea.

Unfortunately, not every sea turtle has a film crew watching its back, and many species have found themselves in trouble.

Sea turtles face a lot of threats — from poaching, to fishing gear, to habitat destruction. Climate change affects how they nest and breed. A 2015 report suggested that more than half of all the world's sea turtles have accidentally eaten plastic debris.

The IUCN, a world authority on nature conservation, lists three of the world's seven sea turtle species as "endangered" or "critically endangered" and three more as "vulnerable."

Since the 1950s, conservation efforts have tried to address these threats. But have they worked?

A new study shows that sea turtle protection efforts have indeed paid off.

A team of researchers at Greece's Aristotle University headed by Antonios Mazaris analyzed over 4,400 existing estimates of sea turtle numbers, in a report published Sept. 20 in Science Advances.

It's enough that a press release about the study called it a "global conservation success story."

Changes to fishing regulations, beach protections, and other efforts have helped ensure that more baby sea turtles have a chance to see adulthood and that the ocean will be a safer place for adult sea turtles to live.

There's still a lot of work to do, the researchers were careful to note. Some sea turtle populations are still dwindling, there's still a lot to learn, and we definitely shouldn't slack off if we want to see their numbers keep going up.

This study is a reminder that, while humans might cause problems for animals like sea turtles, we also have the power to help fix them as well.