Someone cleverly reversed the roles of women and men throughout history and it's simply a brilliant must-read. 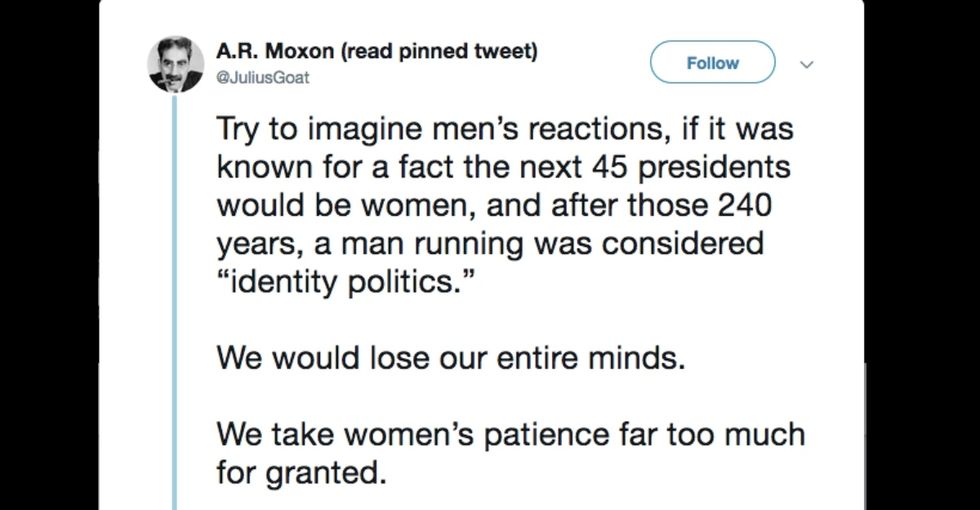 If men put themselves into women's historical shoes for a hot second, how would they handle the heat?

Author and Twitter user extraordinaire, A.R. Moxon (@JuliusGoat) shared a thread describing an alternate future where men experience the social and political reality that American women have experienced in the U.S.

"Try to imagine men's reactions," Moxon wrote, "if it was known for a fact the next 45 presidents would be women, and after those 240 years, a man running was considered 'identity politics.'

We would lose our entire minds."

"We take women's patience far too much for granted," he added.

Indeed. First of all, I find it hilarious when men—white men in particular—decry "identity politics," since the reason white males have dominated U.S. politics is because they systematically excluded every other identity for centuries. Miss us with that, dudes.

Second, take a moment to imagine 45 female presidents in a row. Just let that sit for a minute. DANG.

Moxon then moved from the presidency to the Supreme Court to continue the point. Four out of 113 justices? Come on, now.

It's not just political positions. Women have legally been pushed down and held back in all kinds of ways.

Moxon elucidated his point by pointing out how men would feel if they were denied the right to vote and had their bodies regulated by the government.

Then he pointed out the denial of higher education for completely ridiculous reasons...

...and the further ridiculousness of celebrating a tiny percentage of our country's Legislative Branch being made up of women.

And after all of this unreal history, no iteration of the Equal Rights Amendment has ever been passed.

But...but...nope. This history and legacy of gender inequality is ridiculous, and it's time to come to grips with it.

"I know, these are crazy hypotheticals," wrote Moxon. "Insane. It would never happen. It would be insane to treat a gender that way."

"But if it did, wouldn't it matter?" he asked. "Wouldn't it need correcting? Man. We'd need to rethink everything."

Since mostly male legislatures continue to make dangerous decisions about women's health, too many people still can't fathom having a female president, and women still only make up 20% of congress a full 27 years after The Year of the Woman...yeah, we need to rethink everything.

Thank you, A.R. Moxon for making the point so beautifully.