She's a star student who's full of passion, but she knows one phone call could wreck it all.

The hardest part? Questioning her own dignity. 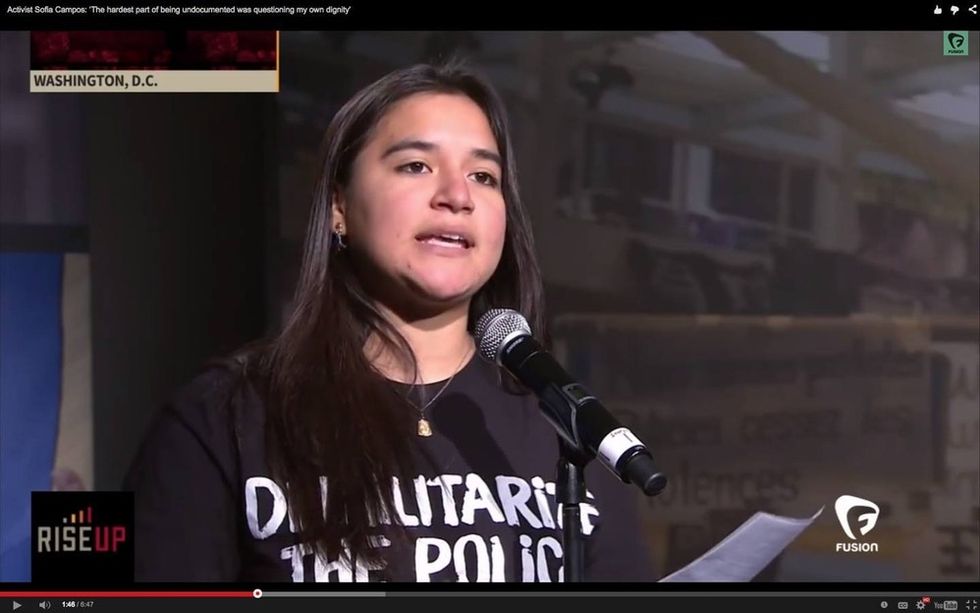 In some ways, she's just like anyone her age.

She grew up in California; she's a graduate student; she has hopes and dreams and fears.

But in other ways, she couldn't be more different: she is undocumented.

Sofia grew up in the US, but she was born elsewhere. And because of that, her mere existence in the US is illegal. Take a minute to really let those words soak in. She says, "My being is illegal."

Sometimes she is scared — even terrified.

She knows that there is a huge risk to sharing her story. Because of the law, she has to fear for herself and her family — not to mention her friends.

But mostly, she is undocumented, unafraid, and unapologetic.

To hear the entirety of Sofia's passionate speech, check out the video below.

FACT CHECK TIME! Here's a bit more info on the politics of what Sofia is talking about:

Dr. David McPhee offers advice for talking to someone living in a different time in their head.

Few things are more difficult than watching a loved one's grip on reality slipping away. Dementia can be brutal for families and caregivers, and knowing how to handle the various stages can be tricky to figure out.

The Alzheimer's Association offers tips for communicating in the early, middle and late stages of the disease, as dementia manifests differently as the disease progresses. The Family Caregiver Alliance also offers advice for talking to someone with various forms and phases of dementia. Some communication tips deal with confusion, agitation and other challenging behaviors that can come along with losing one's memory, and those tips are incredibly important. But what about when the person is seemingly living in a different time, immersed in their memories of the past, unaware of what has happened since then?

Psychologist David McPhee shared some advice with a person on Quora who asked, "How do I answer my dad with dementia when he talks about his mom and dad being alive? Do I go along with it or tell him they have passed away?"

Jon Stewart delivers alarming prediction that Trump 'has a very good chance' of winning a 2024 election.