Scientists reveal the best tool for cleaning fresh apples could be right in your pantry. 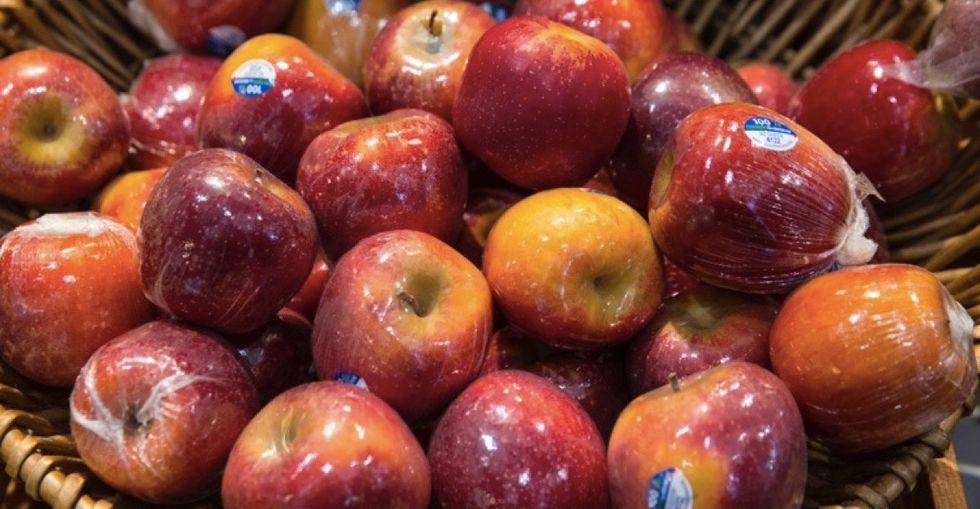 Don't get me started on how awesome apples are because, seriously, they're delicious. But there's a major problem with this tasty fruit: They're dirty.

Conventional (nonorganic) apples often have residue inside and outside the apple from dozens of pesticides used in the production process. These pesticides can improve yield, but they can also have a devastating effect on groundwater and the environment, and they might affect the people who spread and consume them.

And while the apples found at the grocery store have already been washed or rinsed in a bleach solution to remove dirt and harmful microbes, the pesticide residue can still remain. Cleaning or washing conventional apples is a must, but with what?

These apples are off to become cider. Lucky apples. Photo by Matt Cardy/Getty Images.

Researchers at the University of Massachusetts, Amherst, put together a study to develop a useful solution (pun intended).

The team purchased organic gala apples and treated them with common pesticides (thiabendazole and phosmet, the latter of which penetrates the skin of the fruit). Then they compared the effectiveness of rinsing the apples in running tap water, soaking them in a bleach for two minutes, or soaking them in a baking soda solution for two minutes. (After the bleach or baking soda soaks, they rinsed them in tap water to remove the solutions.)

Is there anything more fun than washing apples by the barrel-full? I think not. Photo by Kenzo Tribouillard/AFP/GettyImages.

The baking soda and water solution performed better than a both the bleach solution and the plain running tap water — but it's still not without concerns.

One teaspoon of baking soda in two cups of water broke down the pesticides, which made it easier to wash them away. However, it didn't completely remove the pesticides that had already gotten deeper into the fruit. And while each method was only tested for two minutes, it took 12-15 minutes to completely get rid of the two pesticides used in this study.

How long would it take to rid an apple of the dozens of pesticides used to grow it? Probably longer than most people are willing to wait for a piece of hand fruit, albeit a delicious one.

A photo of a person about to have the best day of their life. Photo by Remy Gabald/AFP/GettyImages.

While baking soda is an affordable, accessible solution for removing pesticides from apples, the research team says peeling them is probably the best bet.

Or, if your budget allows and you have access, consider trying organic.

Just don't let anything keep you from apples. Because, seriously, they don't get nearly enough credit for their awesomeness.

Come on, have you ever had apple brown betty? Game over. Photo by Paula Bronstein/Getty Images.

Social entrepreneurs have new partner in growing their causes

The past year has changed the way a lot of people see the world and brought the importance of global change to the forefront. However, even social impact entrepreneurs have had to adapt to the changing circumstances brought on by the Coronavirus pandemic.

"The first barrier is lack of funding. COVID-19 has deeply impacted many of our supporters, and we presume it will continue to do so. Current market volatility has caused many of our supporters to scale back or withdraw their support altogether," said Brisa de Angulo, co-founder of A Breeze of Hope Foundation, a non-profit that prevents childhood sexual violence in Bolivia and winner of the 2020 Elevate Prize.

To help social entrepreneurs scale their impact for the second year in a row, The Elevate Prize is awarding $5 million to 10 innovators, activists, and problem–solvers who are making a difference in their communities every day.

"We want to see extraordinary people leading high-impact projects that are elevating opportunities for all people, elevating issues and their solutions, or elevating understanding of and between people," The Elevate Prize website states.

Founded in 2019 by entrepreneur and philanthropist Joseph Deitch, The Elevate Prize is dedicated to giving unsung social entrepreneurs the necessary resources to scale their impact and to ultimately help inspire and awaken the hero in all of us.

"The Elevate Prize remains committed to finding a radically diverse group of innovative problem solvers and investing unconventional and personalized resources that bring greater visibility to them as leaders and the vital work they do. We make good famous," said Carolina García Jayaram, executive director, Elevate Prize Foundation.

The application process will take place in two phases. Applicants have till May 5 for Phase 1, which will include a short written application. A select number of those applicants will then be chosen for Phase 2, which includes a more robust set of questions later this summer. Ten winners will be announced in October 2021.

In addition to money, winners will also receive support from The Elevate Prize to help amplify their mission, achieve their goals, and receive mentorship and industry connections.

The 10 winners include Simprints, a UK-based nonprofit implementing biometric solutions to give people in the developing world hope and access to a better healthcare system; ReThink, a patented, innovative app that detects offensive messages and gives users a chance to reconsider posting them; and Guitars Over Guns, an organization bridging the opportunity gap for youth from vulnerable communities through transformational access to music, connectivity, and self-empowerment.

You can learn more about last year's winners, here.

If you know of someone or you yourself are ready to scale your impact, apply here today.

The Matt Gaetz sex-trafficking allegations have become the biggest political scandal since Donald Trump left office. The Republican congressman from Florida is being investigated by the Justice Department for having an alleged "sexual relationship with a 17-year-old and paid for her to travel with him."

Gaetz is known as one of Donald Trump's most fervent supporters and was among the Republican Congressman who fanned the conspiracy flames that many say led directly to the Capitol riot on January 6.

Keep Reading Show less
science
Get stories worth sharing delivered to your inbox
By signing up you agree to Upworthy's privacy policy.
Trending Stories
kindness
Heroes