Scientists have found a lake. In Antarctica. Here's why that's weird and exciting. 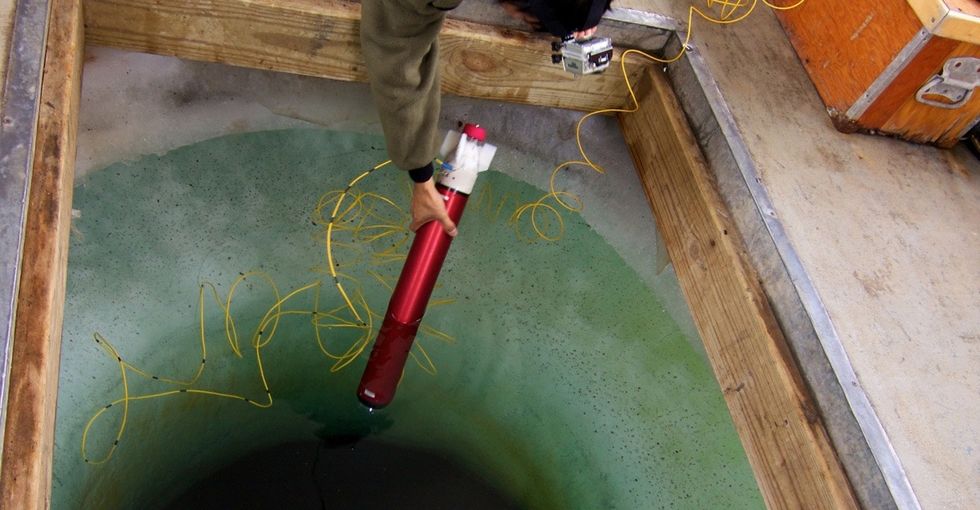 Scientists have found something mysterious buried underneath the Antarctic ice.

I know this is how a lot of horror movies tend to start, but don't panic. British scientists were investigating a part of Antarctica known as Princess Elizabeth Land.

Princess Elizabeth II stands at the right in this picture from 1933, two years after the land was named after her. You probably know her better as Queen Elizabeth II, the current British monarch. Image from AFP/Getty Images.

Anyway, scientists found what they think is an immense canyon system below Antarctica. And, buried deep within it, a subglacial lake.

This pond is located under a glacier in Norway. Now imagine this much darker, deeper, and nearly 90 miles long. Image from Guttorm Flatabø/Flickr.

The scientists are inferring the lake's presence from subtle patterns they've observed in the ice. To confirm whether or not the lake exists, another team of American and Chinese scientists have flown a plane mounted with ice-penetrating radar over the area to get recordings. They're going to meet up in May to share the data.

If the recordings confirm it exists, the lake will be part of an immense 680-mile canyon system buried under the ice. Current measurements put the lake at about 87 miles long and 12 miles wide.

This isn't the first lake scientists have found trapped under the ice.

Another lake, Lake Vostok, is even larger than this new potential lake, measuring in at a whopping 160 by 30 miles and covered in nearly 13,000 feet of ice. There are other lakes too, including Lake Whillans and Lake Ellsworth.

Scientists are excited about these undiscovered lakes because they have the potential to be full of weird, isolated creatures.

A student tests the type of submersible used to explore subglacial Lake Whillans. Image from NASA/JPL-Caltech.

In 2013 an American team drilled over 700 meters into Lake Whillans, another Antarctic lake. They found thousands of different types of microbes living in the brutal, cold darkness.

These are organisms that might have not had any contact with the outside world since they were covered in ice over 15 million years ago.

If scientists were able to find that much life that by drilling down into other lakes, it's definitely possible that more strange, unseen critters could be living in this newly discovered lake as well.

By studying these mysterious, icy denizens, scientists can learn about how life evolves in isolation and how creatures deal with extreme cold and dark. What do these microbes they eat, for example? How did they get trapped? Do all Antarctic lakes contain life? If not, what makes the ones that do so special?

These lakes can help us understand how life works on Earth but also hint at what kinds of life we might find out in space.

Will the oceans of Europa look like Lake Whillans? Image from NASA/JPL-Caltech/SETI Institute/Wikimedia Commons.

Antarctica has been home to conspiracies, alien stories, and fictional lost worlds for as long as we've known about it. But it turns out that the real-life continent is just as mysterious as any movie.

Getting to know how life survives in such harsh conditions here on Earth will better prepare us to identify and interact with life on other planets.

It’ll take us a while yet before we come close to encountering creatures on other planets, but it’s cool to remember that there are still places here on Earth we have yet to discover.