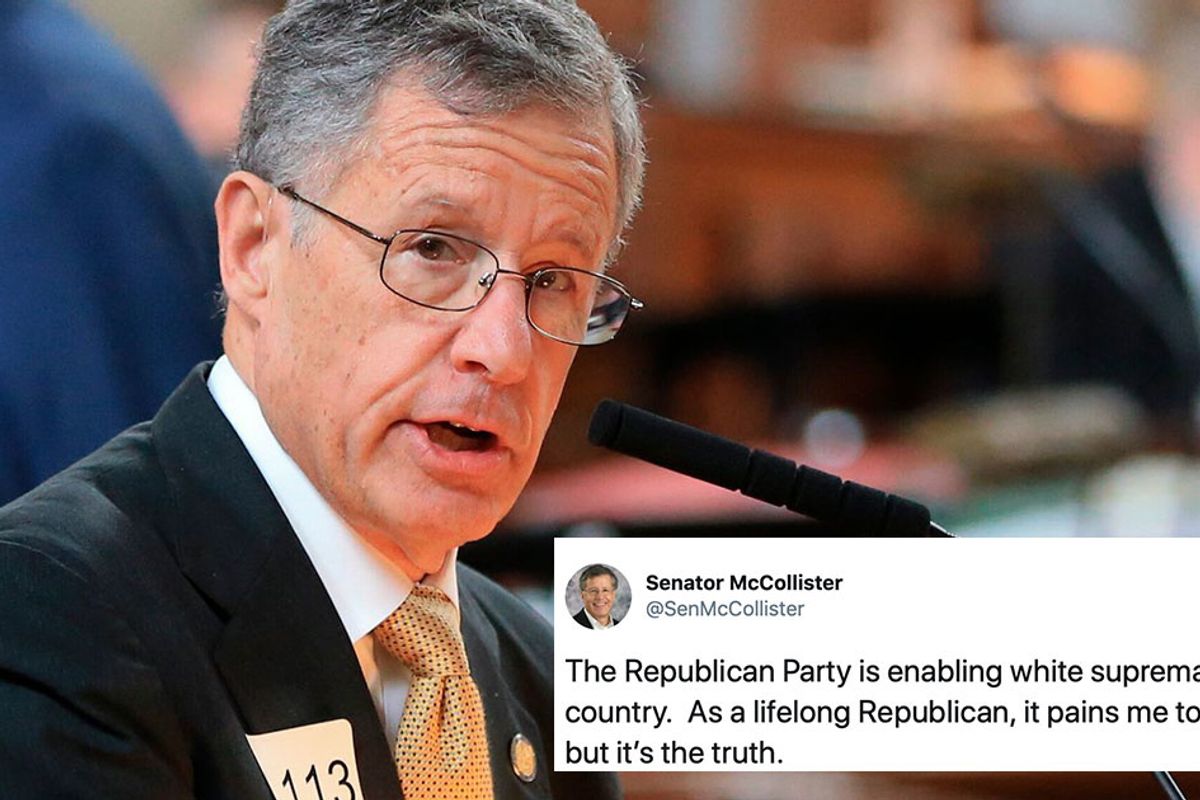 Nebraska state senator John McCollister took to Twitter over the weekend, calling out the Republican party's enabling of white supremacy and tolerance of racism. The kicker? He himself is a lifelong Republican.

Senater McCollister wrote in a series of tweets:

"The Republican Party is enabling white supremacy in our country. As a lifelong Republican, it pains me to say this, but it's the truth."

Daaaaang. He just went and dropped the bomb right out of the gate. Even with the "not all Republicans" caveat, he still spoke his truth.

After pointing out the president's racist rhetoric along with Congress folk who "look the other way and say nothing," he explained why he's speaking up:

"When the history books are written, I refuse to be someone who said nothing."

Related: Using the 'dictionary definition of racism' defense is a sure sign you don't understand racism

THIS. This is what at least half of America has been wanting to see—people willing to step outside of party loyalty or political sycophancy to stand up for what they know is right.

Finally, he implored his fellow GOP members to "stand up and do the right thing" like Lincoln would have done.

It takes moral courage to stand up to the group you identify with. Some might say that it took too long for this kind of statement to be made, but late is better than never. Scores of people on Twitter thanked the Senator for speaking out.

And wouldn't you know, the Republican party thoughtfully took McCollister's words to heart. They thanked him for his honesty and immediately began to examine how the GOP had become the party of white nationalists. They decided to unite in condemning the president's bigoted language and start listening to try to understand the intricacies of racism in America.

Just kidding. They didn't do that.

What they did do is ask Senator McCollister to leave the Republican party. Seriously.

RELATED: Obama's latest tweets consoled a grieving nation in a way that Trump never could

The official Twitter feed of the GOP in Nebraska said that McCollister should "tell the truth and change his party registration."

They basically accused him of being a liberal in sheep's clothing and told him he should just declare himself a Democrat. The funniest part, though, is when they said that after McCollister's statements, "we're happy he has finally shed all pretense of being a conservative."

They state in their own letter that he had advocated for higher taxes, gun control, and abortion rights—but apparently naming racism and calling out white supremacy is the defining factor in losing one's conservative status? That's the final straw? Is that really what the party whose demographics speak straight to the heart of white supremacy wants to go with?

(If you want to know what I mean by demographics, here's a screenshot of charts from Legistorm.com showing Congress Republican members and staffers by race. The blue are "Caucasian":

And for comparison, here are the member and staff charts for congressional Democrats by race:

Huh. I mean, if I were a white supremacist, I know I'd be celebrating the party in our highest legislative body that's like, 95% white. I'd definitely think they were working for me and my white supremacist interests. And when leaders in that party say things that I like to hear—like that immigrants and Muslims are inherently dangerous or that we don't want people from sh*thole countries (only countries that are a majority brown and black, of course) from coming here—then yeah, I'm all for them. And if they don't overtly state that I'm not welcome in their party, or that my white nationalism is basically white supremacy by a different name, then naturally I'm going to think they're cool with letting me do my racist thing, or maybe that I even have their blessing.

I'm not even a partisan person, and I can see this as clear as day.

Kudos to Senator McCollister for swimming against the stream and saying what needed to be said. Some issues will only be addressed if they are called out by enough voices from the inside, and it's always hard to be one of the first. Keep encouraging your fellow GOP members to take a stand up and be on the right side of history.