Queen Elizabeth just made her first Instagram post and it has a secret nod to a feminist hero. 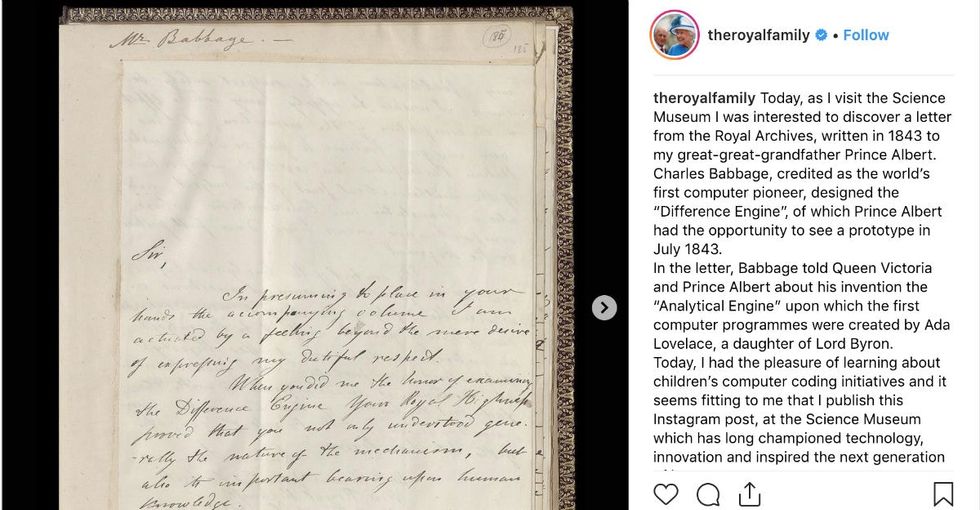 Women in STEM apparently have the support of Queen Elizabeth.

The Queen posted her first post on the Royal Family Instagram. The 92-year-old monarch paid a visit to the Science Museum in Kensington to announce an exhibit called “Top Secret: from Ciphers to Cyber Security.”

The Queen posted two photos of a letter to Prince Albert from Charles Babbage with a caption.  "Today, as I visit the ScienceMuseum I was interested to discover a letter from the Royal Archives, written in 1843 to my great-great-grandfather Prince Albert,"theQueen wrote in her post.

"Charles Babbage, credited as the world’s first computer pioneer, designed the 'Difference Engine,' of which Prince Albert had the opportunity to see a prototype in July 1843.

The Queen snuck in a nod to Ada Lovelace, who is also sometimes known as the first computer programmer.

"In the letter, Babbage told Queen Victoria and Prince Albert about his invention the ‘Analytical Engine’ upon which the first computer programmes were created by Ada Lovelace, a daughter of Lord Byron.

"Today, I had the pleasure of learning about children’s computer coding initiatives and it seems fitting to me that I publish this Instagram post, at the Science Museum which has long championed technology, innovation and inspired the next generation of inventors.

The Queen’s post comes on the heels of the Royal Family’s issue of socialmedia guidelines, asking people to behave with "courtesy, kindness and respect for all other members of our social media communities” when posting on Royal social media accounts.

Lovelace was nearly forgotten by history. Lovelace was taught math and science at a time when women weren’t educated in those subject. She met Babbage at 17, and he quickly became her mentor. Lovelace translated an article on Babbage’s analytical engine, adding her own notes, where she theorized how the device could handle numbers and letters as well as repeat a series of instructions. Lovelace’s work was forgotten until it was rediscovered in the 1950s. In the 1980s, the U.S. Department ofDefense named “Ada,” a new computer language after Lovelace.

While it might seem like a small gesture, the Queen’s support of children pursuing an interest in STEM is huge. Currently, women make up only 12-25% of the STEMworkforce. The gap begins as early as kindergarten. It’s important to encourage girls to follow their interests at a young age, so by the time they become women, they can contribute to advancements in the field, much like Ada Lovelace did before them.