Portugal. The Man's new music video is a guide to resisting Trump.

Not only is it a catchy tune, but it's also packed with tips to making a better world. 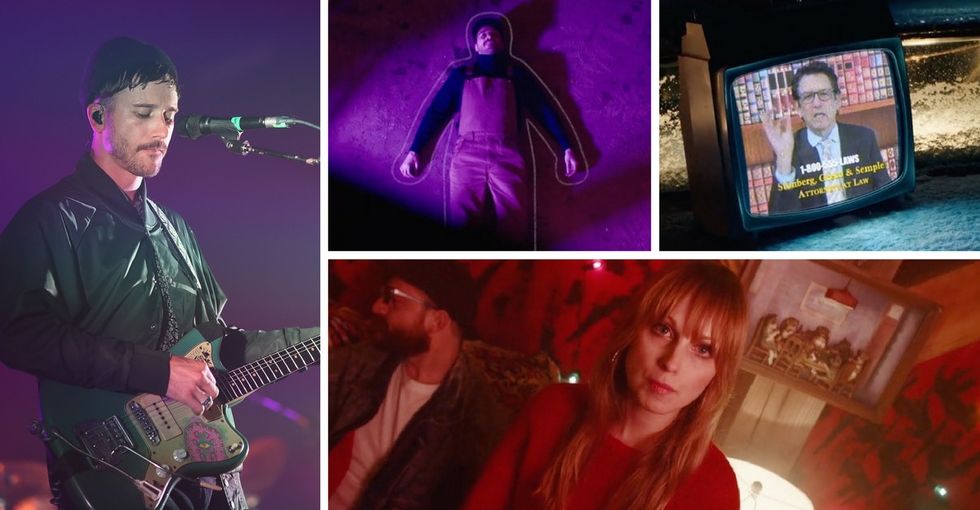 The music video for "Feel It Still," a song by a band called Portugal. The Man, isn't exactly what it seems.

To the casual observer, it's your standard music video. But if you look deeper, it becomes a bit more obvious what it actually is: a toolkit for resistance in the age of Trump.

An interactive version of the video is on the band's website.

There, viewers are instructed to click on a series of "easter eggs" hidden throughout the video, which depicts lead singer John Gourley as a party guest who, after getting knocked out during a fight, wakes up in a junkyard filled with problems that need fixing.

Every time a clue is clicked, a message such as "Give to the ACLU" or "Combat climate change" pops up on the screen. At the end of the video, viewers are taken to a page where they can take action on the items they've unlocked (as well as clicking an "unlock all" button to bring up the full range of choices). In all, there are 30 different action items.

This moment in the video, which links to the "Fight Fake News" easter egg, resulted in an angry tirade from conspiracy theorist Alex Jones. Screenshot from Portugal. The Man/YouTube.

This steamy shot of two people in the back of a car links to the band's "Fund Planned Parenthood" call to action. Screenshot from Portugal. The Man/YouTube.

The quick shot of a lawyer in a junkyard takes people to an "Understand Your Protest Rights" website. Screenshot from Portugal. The Man/YouTube.

Juxtaposing the devil-may-care attitude of the song with tangible ways to resist the Trump administration is by design.

"This project came at an interesting time where music and culture and politics are coming together in a way we haven’t seen in decades," explained Jason Kreher, the creative director of Wieden+Kennedy, the creative agency the band partnered with to bring the video to life, in a press release. "We loved the idea of presenting the apathetic, decadent 'rebel just for kicks' from the song against a hidden message of resistance."

He described the video as being "for the people out there who are still feeling something [...] a real, practical laundry list of ways you can get out there and fight injustice."

Down for the count and outlined in white chalk, this scene links to the "Stencil Your Own Designs" action item. Screenshot from Portugal. The Man/YouTube.

This woman, shown mouthing the lyrics during the party scene at the song's beginning, represents the video's clue to "Elect Women." Screenshot from Portugal. The Man/YouTube.

And this silhouetted man with a saxophone links to the "Support Undocumented Artists" action. Screenshot from Portugal. The Man/YouTube.

In all, there are 30 action items listed on the band's website along with links to get you started:

Give to the ACLU, fight fake news, stand up for equality, combat climate change, talk about difficult subjects, support Black Lives Matter, send native people to college, contact your representatives in D.C., fund Planned Parenthood, find out where to resist, pick up wheatpaste skills, call the White House, stencil your own designs, understand your protest rights, have a newborn outlook, aid refugees, protect people in the shadows, push for gun control, use your wallet, support undocumented artists, back reasonable drug laws, save an Alaskan village, cross out hate, learn about global warming dislocation, know your rights, download some posters, save the EPA, follow the money, elect women, and help the House Ethics Committee.

Were you able to find them all?

Portugal. The Man's new album, "Woodstock," is now available online and in stores.