Outrage over Trumpian 'Julius Caesar' is exactly what Shakespeare tried to warn us about.

Shakespeare's 'Julius Caesar' carries an important message about democracy, perhaps more relevant than ever before. 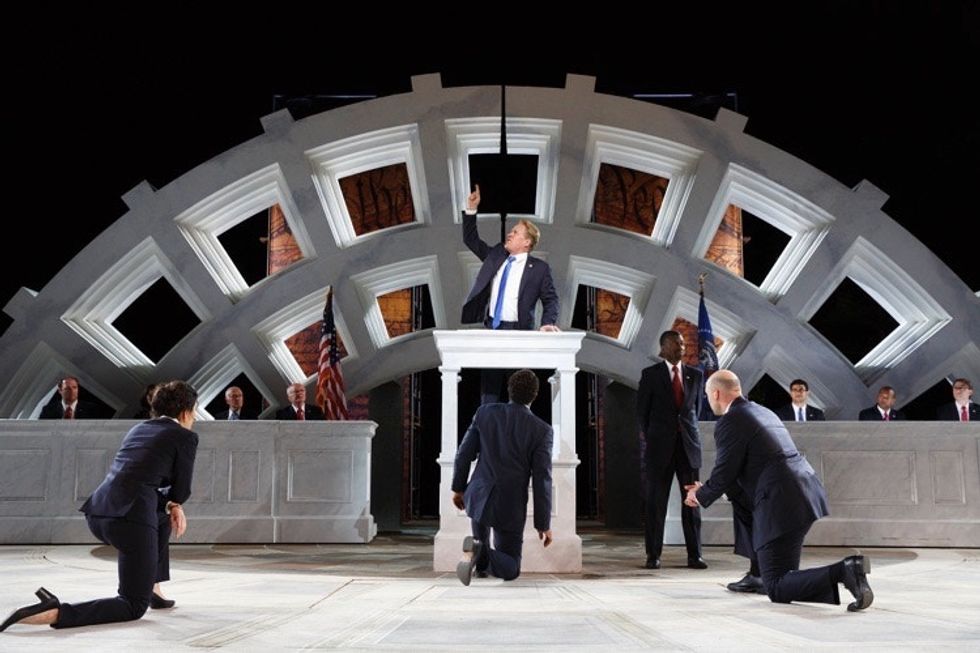 You've probably heard of the provocateur behind this show. His name: William Shakespeare. The play in question: "Julius Caesar," a 17th-century classic.

This particular performance was put on by New York's Public Theater, and as many productions of "Julius Caesar" tend to do, gave it a modern setting — showing just how wonderfully timeless Shakespeare can be. That is, togas were replaced with suits and a certain Roman emperor was replaced with a brash, blond-haired billionaire/president.

In response, hordes of angry people took to social media, chastising the show's sponsors for promoting such a distasteful and harmful display. Within hours, Delta and Bank of America had both issued statements distancing themselves from the production.

In response, Public Theater artistic director Oskar Eustis took the stage with a message for the performance's critics.

The message of the show, Eustis explained before Monday's performance, is that violence is not the answer when it comes to enacting political change.

"Anybody who watches this play tonight — and I am sorry there is going to be a couple of spoiler alerts here — will know that neither Shakespeare nor the Public Theater could possibly advocate violence as a solution to political problems."

"This play warns what happens when you try to preserve democracy by non-democratic means, and again, spoiler alert, it doesn't end up too good," Eustis told the crowd.

Eustis also directly addressed the people who were moved to anger, protest, and boycott the performance, reminding them of the context of the play's central message:

"One of the dangers of that is the danger of a large crowd of people, manipulated by their emotions, taken over by leaders who urge them to do things that not only against their interest, but destroy the very institutions that are there to serve and protect them.

This warning is a warning that's in this show, and we're really happy to be playing that story tonight."

These types of modern productions of "Julius Caesar" are pretty common — regardless of who is in office.

A few years back, The Acting Company put on a production of "Julius Caesar" starring a Barack-Obama-like version of the show's titular character.

Just as Eustis warned: Let's all take care to avoid joining the "large crowd of people, manipulated by their emotions, taken over by leaders who urge them to do things that not only against their interest, but destroy the very institutions that are there to serve and protect them."

The theater, which even Trump has called "a safe and special place," is for all of us, regardless of our politics.